The global low GWP refrigerants market is estimated to garner a revenue of USD 70 billion by the end of 2031 by growing at a CAGR of ~12% over the forecast period, i.e., 2022 – 2031. Further, the market generated a revenue of USD 22 billion in the year 2021. The growth of the market can be attributed to the escalating demand for air conditioners and refrigerants As of 2020, around 6 million air conditioners were observed to be shipped across the globe. 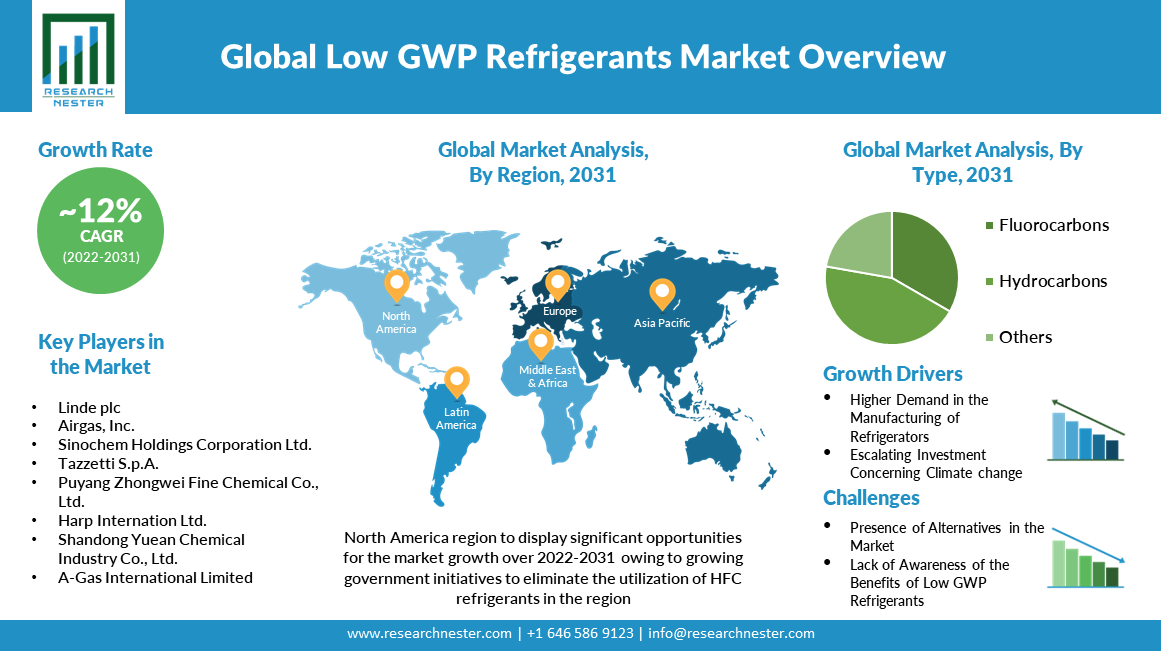 Additionally, the global low GWP refrigerants market is further projected to grow on the back of the elimination of other refrigerants such as, HFC, CFC, and HCFC. In total increment in global warming, the contribution made by CFCs and HFCs is projected to be about 11%. Furthermore, rising concern towards global warming is also anticipated to hike the growth of the market during the forecast period. As of 2020, the temperature of the earth is estimated to be approximately 1-celsius degrees warmer than in the 20th century and is further estimated to rise exponentially. Additionally, a report published by Climate.gov showed that the temperature of the earth is estimated to have spiked by a warming rate of 0.40 degrees Fahrenheit per decade summing up to 0.08 degrees Celsius since 1880. CFC and HCFC are two substances that can trap heat in the lower temperature resulting in earth warming and climate change. These substances can also destroy ozone and capture infrared radiation.

As of 2021, the global sale of automobiles was noticed to be around 65 million units which are estimated to rise from approximately 60 million units in 2020.

Luxurious cars are being highly in demand Y-O-Y in modern world and A/C system is becoming mandatory in cars. Hence, a higher demand for air conditioners in vehicles is observed in the recent decades and expected to hike the growth of the market over the forecast period.

It is observed that more than 190 million units of refrigerators are sold every year globally.

As of 2018, the global commercial air conditioner demand was projected to be around 15 million units.

The value of the cold chain logistics industry amounted to approximately USD 250 billion in 2020 which is further forecasted to reach about USD 400 billion by the year 2028.

The global low GWP refrigerants market is segmented and analyzed for demand and supply by type into fluorocarbons, hydrocarbons, and others, out of which, the hydrocarbons segment is projected to acquire a notable share in the global low GWP refrigerants market during the forecast period. the growth of the segment is ascribed to its higher utilization as a significant alternative to gas and petroleum, also known as renewable hydrocarbon biofuels. Data released by Energy Information Administration (EIA) showed that 293.83 thousand barrels of biodiesel were produced globally in 2019 while 255.50 thousand barrels were consumed worldwide in the same year. Although, hydrocarbon refrigerants must be utilized with high safety measures since they are extremely flammable in nature.

Regionally, the global low GWP refrigerants market is studied in five major regions including North America, Europe, Asia Pacific, Latin America, and the Middle East & Africa region. Amongst these markets, the market in Europe is projected to hold the largest market share by the end of 2031. The market in the Europe region is estimated to grow exponentially on the back of growing government initiatives to eliminate the utilization of HFC refrigerants and a significant number of people switching onto low GWP refrigerants systems. European Economic Area stated that over 90% of Co2 was emitted due to HFCs in 2017.  Moreover, skyrocketing temperature owing to global warming is further expected to influence the growth of the market positively in the region during the forecast period. In the report published by World Health Organization (WHO), in 2020, the temperature in Europe was stated to be 2.2°C higher than in the pre-industrial period.

Furthermore, the global low GWP refrigerants market is also anticipated to witness lucrative growth opportunities in the Asia Pacific region during the forecast period. The growth of the market can be ascribed to similar factors such as, growing global warming and people becoming reluctant to utilize other types of refrigerants. For instance, 2020 was estimated to be the warmest year in the Asia Pacific with 1.40 degrees Celsius higher than the average temperature. All these factors are projected to propel the growth of the market in the region over the forecast period. 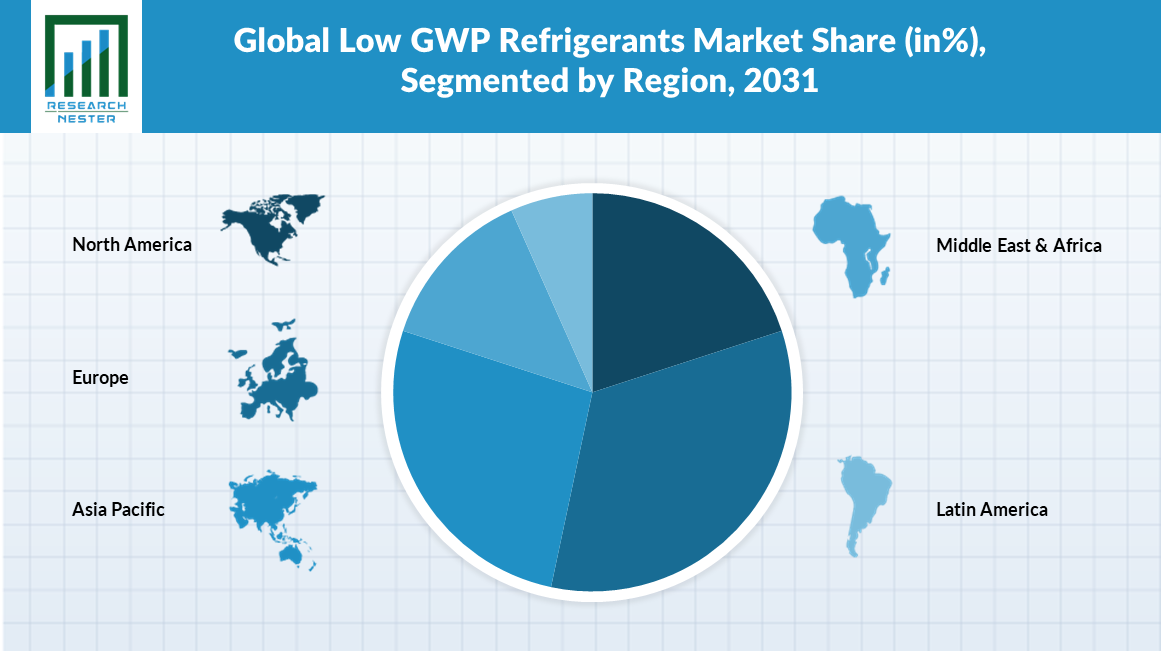 The global low GWP refrigerants market is further classified on the basis of region as follows: 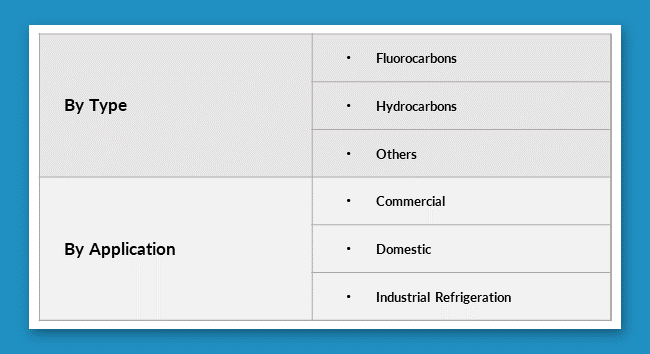 What are the major factors driving the growth of the low GWP refrigerants market?

Rising demand for air conditioners and refrigerants and elimination of other refrigerants such as, HFC, CFC, and HCFC are estimated to majorly boost the market growth.

What would be the CAGR of low GWP refrigerants market over the forecast period?

What are the challenges affecting the low GWP refrigerants market growth?

The availability of alternative refrigerants and lack of awareness of the benefits of low GWP refrigerants are estimated to challenge the market growth.

Which region will provide more business opportunities for growth of low GWP refrigerants market in future?

The market in Europe is projected to hold the largest market share by the end of 2031 and provide more business opportunities in the future.

Who are the major players dominating the low GWP refrigerants market?

What are the segments in the low GWP refrigerants market?

The market is segmented by type, application, by region.

Which segment captures the largest market size in type in the low GWP refrigerants market?

Hydrocarbons sub-segment is anticipated to garner the largest market size by the end of 2031 and display significant growth opportunities.