· April 14, 2021: McDermott International’s CB&I storage solutions business was awarded a contract by AG&P for the procurement and construction of Philippine’s first ever LNG import terminal, which will be located in Batangas.

· March 17, 2020: INOX signed an agreement with Shell India to deploy distribution infrastructure for LNG to provide access to those not connected to pipelines.

The liquified natural gas (LNG) tank market is estimated to garner a large revenue by recording a CAGR of ~7% over the forecast period, i.e., 2022 – 2030. The growth of the market can be attributed to the increasing demand for LNG in the energy, power and steel industries, coupled with the rise in the number of regasification and floating storage units around the world. In 2019, the global demand for LNG rose by more than 12%, amounting to a production value of almost 360 million tons. The demand is evaluated to double by the end of 2050. Along with these, growing cargo transportation and high usage of LNG as a fuel for heavy duty vehicles are also expected to drive market growth in the near future. Furthermore, the overall rise in the production of natural gas and escalating advancements in drilling technology are projected to offer lucrative opportunities to the market in the upcoming years. 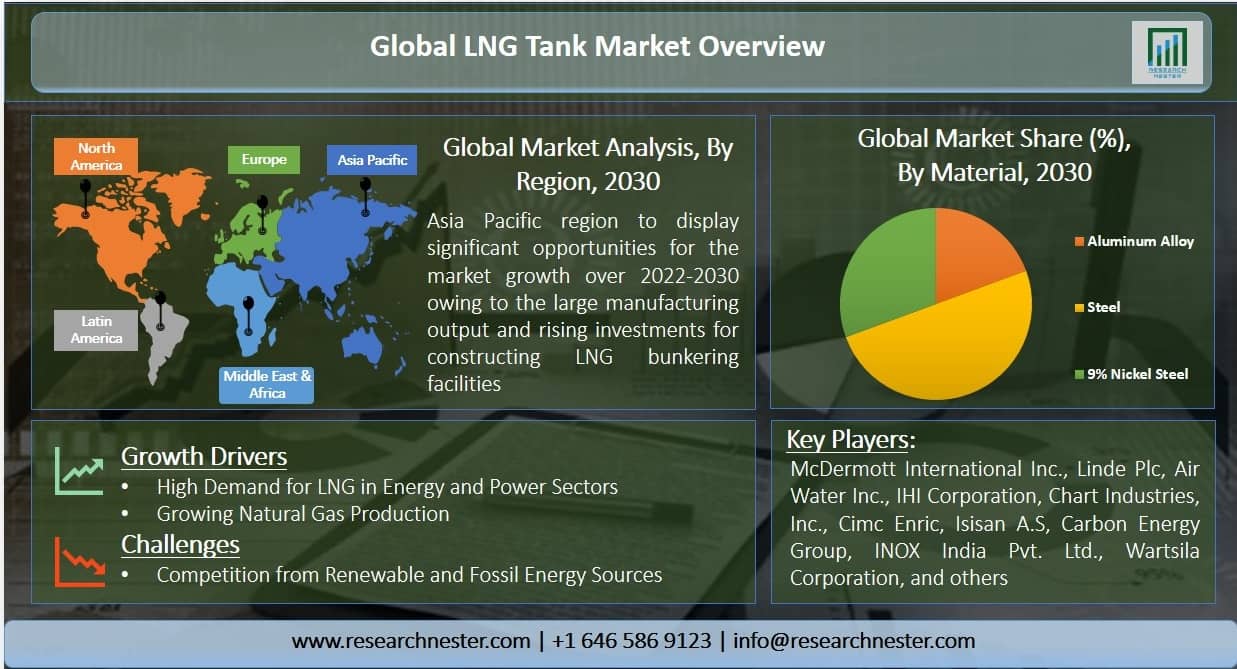 The market is segmented by material into aluminum alloy, steel, and 9% nickel steel, out of which, the steel segment is anticipated to hold the largest share in the LNG tank market on account of the excellent properties of steel, such as distinguished durability, stiffness, corrosion resistance and low thermal conductivity. In addition, high usage of steel to produce applications requiring refrigeration is also expected to boost the growth of the segment in the forecast period. Moreover, on the basis of type, the segment for self-supporting LNG tanks, which can be credited to the rising import and export of LNG around the world and the increase in the number of bunkering facilities.CLICK TO DOWNLOAD SAMPLE REPORT

Qatar was the largest exporter of LNG in 2019. The exporting value of the gas amounted to be more than 106 billion cubic meters that year.

On the basis of geographical analysis, the LNG tank market is segmented into five major regions including North America, Europe, Asia Pacific, Latin America and the Middle East & Africa. The market in the Asia Pacific region is estimated to occupy the largest market share and witness the highest growth over the forecast period on the back of growing investments for the construction of LNG bunkering facilities and the rising use of natural gas in several end-user industries. Apart from these, increasing manufacturing capacities of nations namely, China and India, is assessed to drive market growth in the region. High consumption of liquefied natural gas in Japan, China and South Korea is also estimated to fuel the expansion of market in the APAC. Additionally, Europe is also estimated to occupy a significant share in the market during the forecast period owing to the presence of major LNG importing countries in the region, including France, the U.K., Spain, Belgium and Italy. For instance, France and Spain were the two largest importers of LNG in 2019. In that year, the countries traded in approximately 23 and 22 billion cubic meters of the gas, respectively. 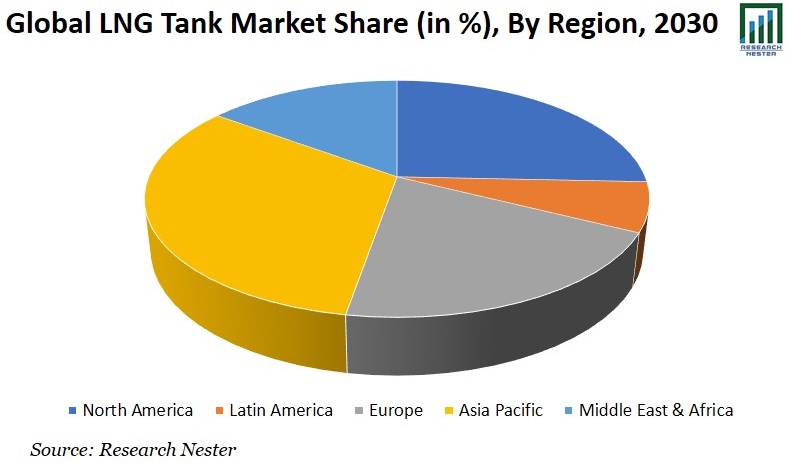 The LNG tank market is further classified on the basis of region as follows:

Our in-depth analysis of the LNG tank market includes the following segments:

What are the major factors driving the growth of the liquified natural gas (LNG) tank market?

The major growth drivers for the market are growing demand for LNG in energy and power industries and increasing production of natural gas.

What would be the CAGR of liquified natural gas (LNG) tank market over the forecast period?

What are the challenges affecting the liquified natural gas (LNG) tank market growth?

High competition to LNG from fossil and renewable energy sources is estimated to hamper the market growth.

Asia Pacific will provide more business opportunities to the market on the back of rising investments for the construction of LNG bunkering facilities and increasing usage of natural gas in several end-user industries in the region.

Who are the major players dominating the liquified natural gas (LNG) tank market?

What are the segments in the LNG tank market?

The market is segmented by material, tank type, and by region.

Which segment captures the largest market size in the material segment in the LNG tank market?

The steel segment is anticipated to hold largest market size and is estimated to grow at a notable CAGR over the forecast period and display significant growth opportunities.