·   August 2021- Unilever announced the launch of Comfort’s new Ultimate Care fabric conditioners that not only extend the life of clothes, but also help consumers reduce their environmental footprint.

·    August 2020- Reckitt Benckiser launched a range of high-performance laundry detergent and fabric softener with plant-based formulas exclusively on Amazon in the U.S.

The global liquid fabric softeners market is estimated to garner a large amount of revenue and grow at a CAGR of ~4% over the forecast period, i.e., 2022 – 2030. The growth of the market can be attributed primarily to the rising disposable income of people across the globe, and their willingness to spend on premium products. According to the Organization for Economic Co-Operation and Development, Ireland witnessed the highest growth in household disposable income, accounting for a growth rate of 8.1 percent in 2020, followed by Costa Rica and Canada with 7.5 percent and 7.3 percent respectively. Along with these, increasing spending on clothing, majorly on expensive and more sensitive form of apparel is also expected to drive market growth in the forthcoming years. Furthermore, there is a surge in the launch of social media advertisements and promotions through e-commerce channels by personal care companies to attract millennial buyers for purchasing fabric conditioners. This is also evaluated to expand market in the near future. In addition, fabric conditioners have several advantages over conventional detergents such as ability to increase the life span of clothes, fast drying and retainment of original shape of clothing, which in turn is projected to offer profitable opportunities to the market. 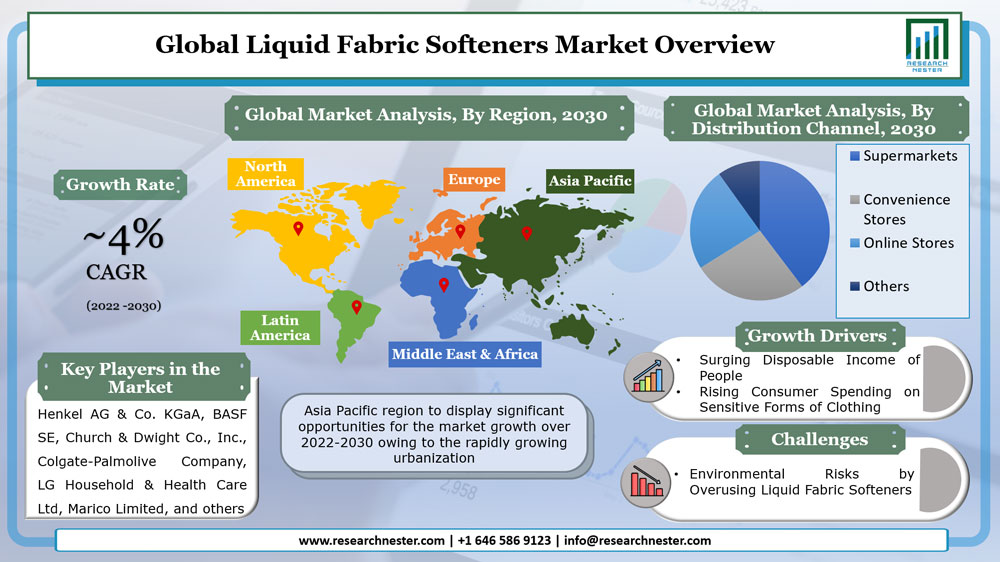 The market is segmented by distribution channel into supermarkets, convenience stores, online stores, and others, out of which, the online stores segment is anticipated to witness notable growth in the global liquid fabric softeners market. This can be accounted to the increasing online sales of products around the world, especially in emerging economies of Asia Pacific. Additionally, on the basis of application, the household segment is assessed to grab the largest share during the forecast period, which can be credited to the high usage of liquid conditioners in households globally to improve the durability of clothes as they reduce the movement of fibers within the yarn. Apart from this, prominent detergent companies are extensively becoming involved in introducing fabric softeners suitable for washing machines, which is also predicted to drive growth of the market segment in the near future. CLICK TO DOWNLOAD SAMPLE REPORT

On the basis of geographical analysis, the global liquid fabric softeners market is segmented into five major regions including North America, Europe, Asia Pacific, Latin America and the Middle East & Africa region. The market in the Asia Pacific is estimated to witness noteworthy growth over the forecast period on the back of the increasing consumer spending, especially in China and India, and rapidly growing urbanization in the region. As per the United Nations, in 2018, Asia was home to 54 percent of the world’s total urban population. The level of urbanization in the continent was 50 percent that year. In addition, increasing sales penetration of the product through retail and online channels are also projected to bolster growth of the market in the region. Moreover, the market in North America is assessed to acquire the largest share during the forecast period owing to the high demand for premium products, and strong presence of major market players in the region. 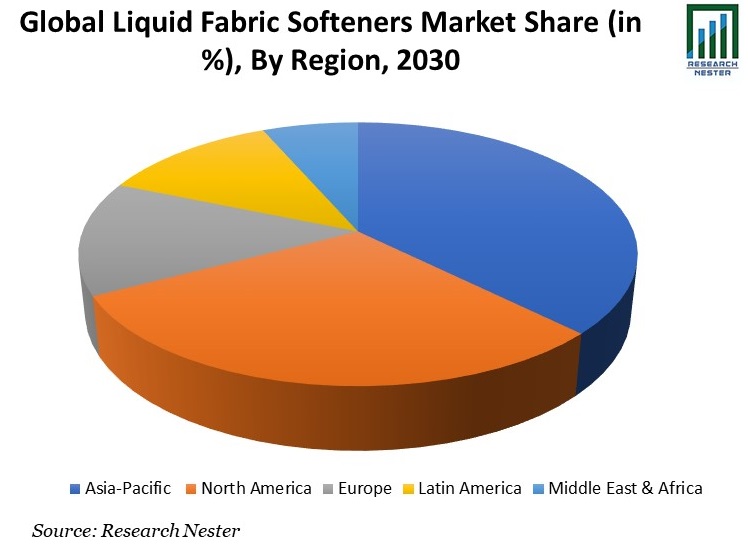 The global liquid fabric softeners market is further classified on the basis of region as follows:

What are the major factors driving the growth of the liquid fabric softeners market?

The major factors driving market growth are rising disposable income of people across the globe, and increasing spending on sensitive forms of clothing.

What would be the CAGR of liquid fabric softeners market over the forecast period?

What are the challenges affecting the liquid fabric softeners market growth?

Environmental risks posed by overuse of liquid fabric softeners are estimated to hamper the market growth.

Which region will provide more business opportunities for growth of liquid fabric softeners market in future?

Asia Pacific will provide more business opportunities for market growth owing to the increasing consumer spending, especially in China and India, and rapidly growing urbanization in the region.

Who are the major players dominating the liquid fabric softeners market?

What are the segments in the liquid fabric softeners market?

The market is segmented by distribution channel, application, and by region.

Which segment captures the largest market size in the form segment in the liquid fabric softeners market?

The liquid segment is anticipated to hold largest market size and is estimated to grow at a robust CAGR over the forecast period and display significant growth opportunities.