The global large volume wearable injectors market is estimated to garner a revenue of ~USD 26 billion by the end of 2031 by growing at a CAGR of ~16% over the forecast period, i.e., 2022 – 2031. Further, the market generated a revenue of ~USD 7 billion in the year 2021. The primary growth factor for the market is projected to be the rising cases of chronic diseases around the globe and deaths owing it. As per a recent study in 2020, it was estimated that around 40 million people are killed globally by chronic diseases. Further, it was estimated by the Centers for Disease Control and Prevention that 6 out of 10 adults in the United States are living with one chronic disease, whereas 4 out of 10 adults have been diagnosed with more than two chronic diseases in the year 2022. 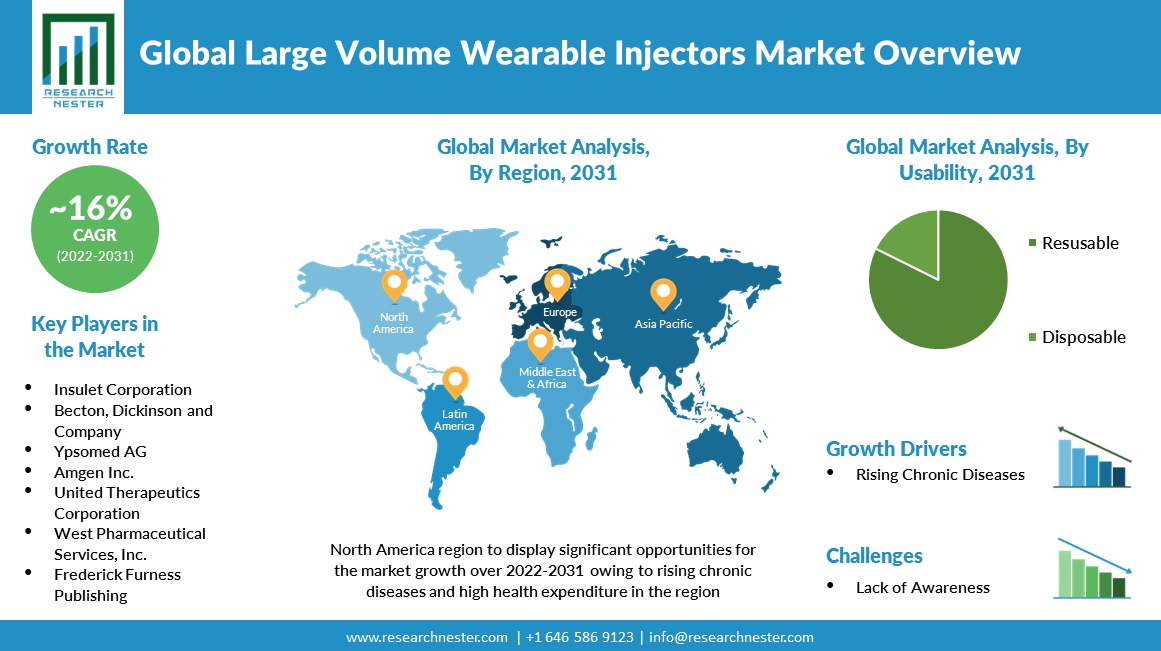 Large volume wearable injectors are drug delivery devices used for single-step administration of drugs for lengthier extent. These devices are designed to stick to the patient’s body. A large reservoir is used for storing and delivering sufficient amount of medications via subcutaneous tissues more quickly and safely. The increasing prevalence of non-communicable diseases among the global population and the growth in deaths due to it, is anticipated to bolster the demand of large volume wearable injectors. According to a recent World Health Organization (WHO) study published in 2021, non-communicable diseases (NCDs) kill approximately 41 million people worldwide each year. This is equivalent to around 71% of the total global deaths.

Regionally, the global large volume wearable injectors market is studied into five major regions including North America, Europe, Asia Pacific, Latin America and Middle East & Africa region. Amongst these, the market in North America is projected to hold the largest market share by the end of 2031, owing to rising chronic cases in the region. Chronic diseases such as heart disease, cancer, and diabetes are the leading causes of death and disability in the United States. They are also the leading drivers of the nation’s USD 4.1 trillion in annual health care costs. Further, the boom in healthcare industry is an another growth factor for the large volume wearable injectors market growth. The revenue generated by the U.S. healthcare industry stood at USD 800 billion as of 2021. 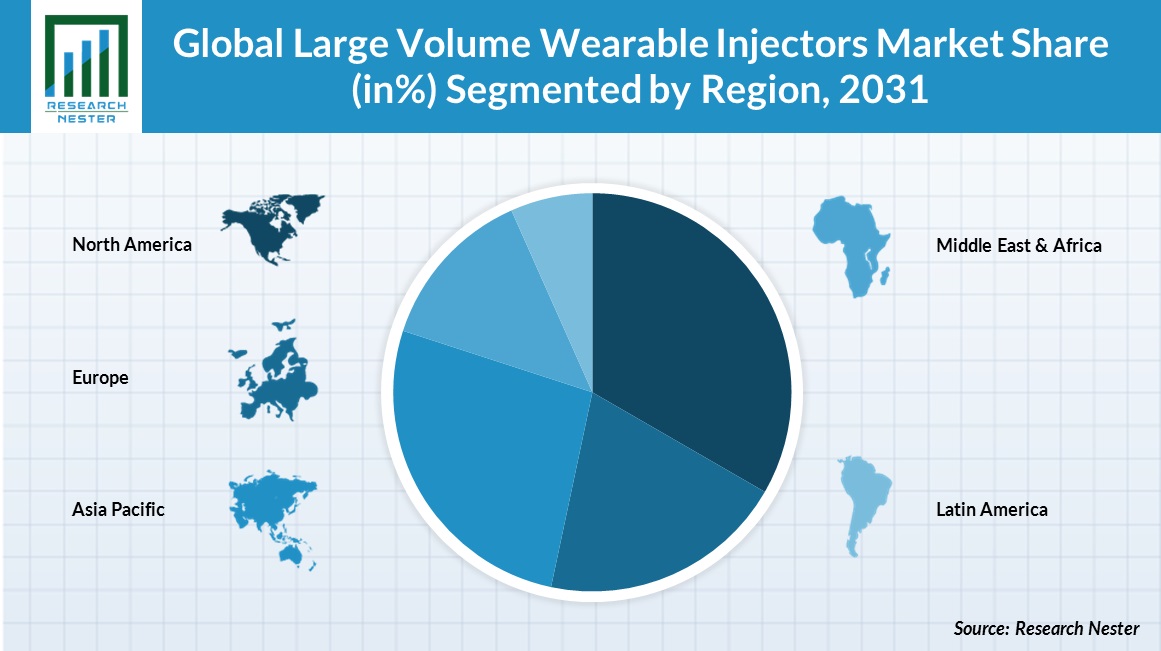 The global large volume wearable injectors market is further classified on the basis of region as follows:

What are the major factors driving the growth of the large volume wearable injectors market?

The rising global burden from chronic diseases and burgeoning geriatric diseases are some of the factors that are expected to expand the market growth in the forecast period.

What would be the CAGR of large volume wearable injectors market over the forecast period?

What are the challenges affecting the large volume wearable injectors market growth?

The lack of awareness coupled with rising awareness about reimbursements and additional expenses are some of the factors that are expected to hamper the market growth.

Who are the major players dominating the large volume wearable injectors market?

What are the segments in the large volume wearable injectors market?

The market is segmented by device type, usability, therapeutic areas, and by region.

The cardiovascular diseases segment is anticipated to garner the largest market size by the end of 2031 and display significant growth opportunities.