Krill oil is basically an extract derived from tiny crustaceans, which are found in the ocean water all across the world. It has been noticed that the oil is more effective as compared to other marine oils in terms of healthiness, potency and absorption. Euphasia Superba and Euphasia Pacifica are the two main species used for the extraction process of krill oil. The oil consists of omega-3 fatty acid which is considered as a nutritional component in it. Other health benefits associated with omega-3 consumption includes inflammation, joint and bone health, menopause, aging and obesity. Krill oil contains fats that reduces swelling, helps to maintain low cholesterol, makes blood platelets less sticky which prevents blood clotting. Various benefits associated with the consumption of krill oil coupled with the rising ease of consumers to adopt healthy life style will further increase the demand of krill oil across the globe. 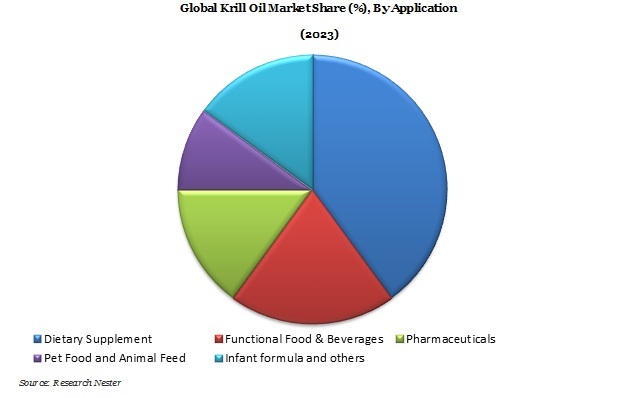 Functional food and beverages segment is expected to project a CAGR of 13.1% over the period of forecast. The reason behind the expansion of market in both segments is attributed to the increasing use of krill oil for the prevention and cure of heart disease, high cholesterol, high blood pressure and painful menstrual periods. By consumption, tablet segment is expected to contribute highest market share as compared to the other forms of consumption. Among the tablets sub-segments, soft gel form is estimated to project highest market share witnessing a compound annual growth rate of 13.5% over the forecast period. Geographically, the global krill oil market is mainly concentrated in Europe followed by Asia Pacific. Europe is expected to contribute highest share in revenue of global krill oil market due to highest krill oil harvest units in the region. Krill oil market in Asia Pacific is anticipated to expand at a CAGR of 13.1% over the forecast period. Rising demand for krill oil by various pharmaceutical and dietary supplement companies is expected to be the major growth driver of global krill oil market across the globe. Heart disease continues to dominate the krill oil market, 75 percent of the total omega-3 fatty acids harvested is targeted towards the cure and prevention of heart related diseases across the globe. CLICK TO DOWNLOAD FREE SAMPLE REPORT

There was a time when krill oil was generally consumed by doctor’s recommendation. Rising awareness related to various health benefits such as prevention of heart disease, cholesterol reduction and so much more has increased the demand and consumption of krill oil by various means. The consumption forms are categorised in to following segments:-

Tablet segment is further sub-segmented in to following categories

Global Krill Oil Market is further classified on the basis of region as follows:

Increasing health concerns among the consumers, rising adoption of fish oil alternatives, growing awareness of health benefits through the consumption of krill oil, promotion of the product through various trade show and introduction of innovative products of krill oil (Flexitech, superba boost) are some of the key factors fuelling the growth of global krill oil market across the globe.

Pregnant and breastfeeding women’s are recommended consuming at least 200mg/day of omega-3 DHA or 2 oily fish meals per week. Intake of krill oil component (omega-3s) can lead to a lower risk of infant allergy; increasing awareness about the health benefits of krill oil nutrients in content of infant formula is expected to drive the usage of krill oil in infant formula which is likely to propel the growth of global krill oil market over the forecast period i.e. 2016-2023.

High cost of the products, lack of proper regulation, preference towards the use of established fish oils, and lack of consumer awareness towards the nutritional benefits of krill oil products are some of the major factors that can restrain the market growth over the period of forecast i.e. 2016-2023.

Global Krill Oil market has been studied on countries and regions like: