The global krill oil market is estimated to garner a revenue of ~USD 2 Billion by the end of 2031 by growing at a CAGR of ~16% over the forecast period, i.e., 2022 – 2031. Further, the market generated a notable revenue in the year 2021. The growth of the market is primarily attributed to the growing occurrences of cardiovascular diseases (CVDs) and high cholesterol across the globe. As per the data released by the World Health Organization (WHO), globally, each year around 17.9 million people lose their lives from CVDs, which denotes 85% deaths as a result of strokes and heart attacks. 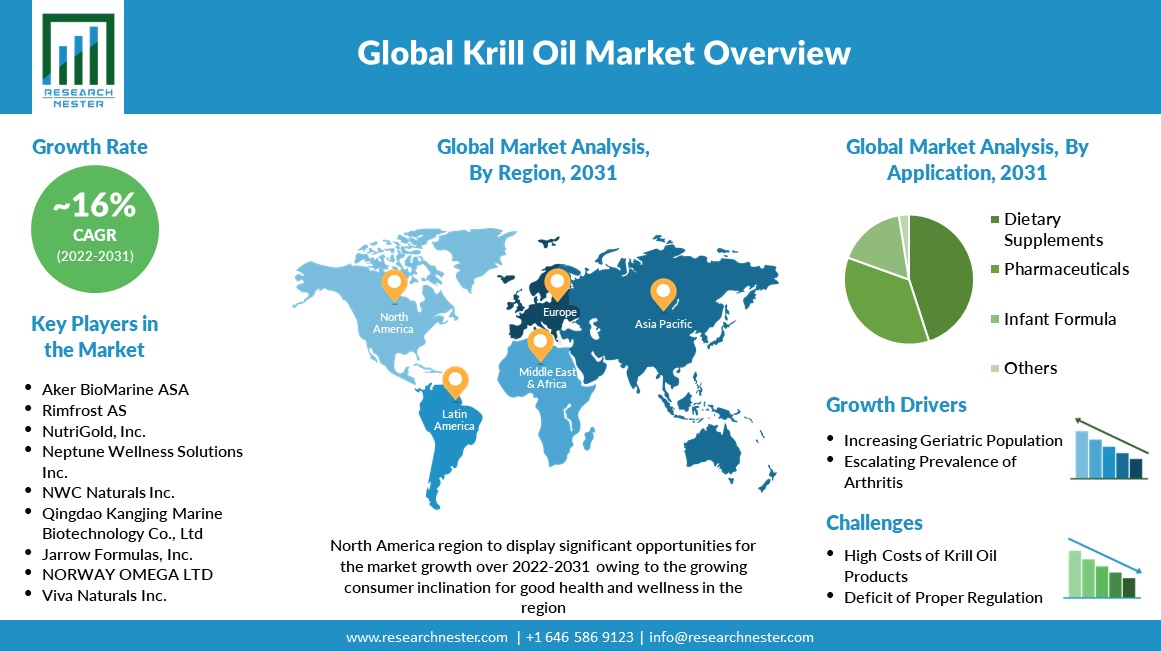 Krill oil is derived from the oil of the tiny, translucent marine species Euphausia Superba. Over the time, krill oil has been gaining popularity in the market as an alternative to fish oil. It is high in eicosapentaenoic acid (EPA) and docosahexaenoic acid (DHA), which are omega fats found primarily in marine creatures. Omega-3 fatty acid, which is a dietary component is essential for proper body functioning. Therefore, increasing awareness about the numerous health benefits of omega-3 fatty acids associated with bone health, obesity, aging, and menopause are estimated to lead the growth of the market. For instance, by 2030, approximately 1 billion people worldwide, including 2 in 6 women and 1 in 8 men, are estimated to live with obesity.

The global krill oil market is segmented and analyzed for demand and supply by application into dietary supplements, pharmaceuticals, infant formula, and others, out of which, dietary supplements segment is estimated to have the largest market share over the forecast period on the back of the increased awareness in people to fulfill the need of essential nutrients for harnessing the optimum health benefits. For instance, in developed countries, approximately 35 to 55% of adults use dietary supplements.

Regionally, the global krill oil market is studied into five major regions including North America, Europe, Asia Pacific, Latin America and Middle East & Africa region. Amongst these markets, the market in North America is projected to hold the largest market share by the end of 2031 backed by the growing consumer inclination for good health and wellness in the region. For instance, according to 64% of Americans, their health is now more important to them than it was before the pandemic. 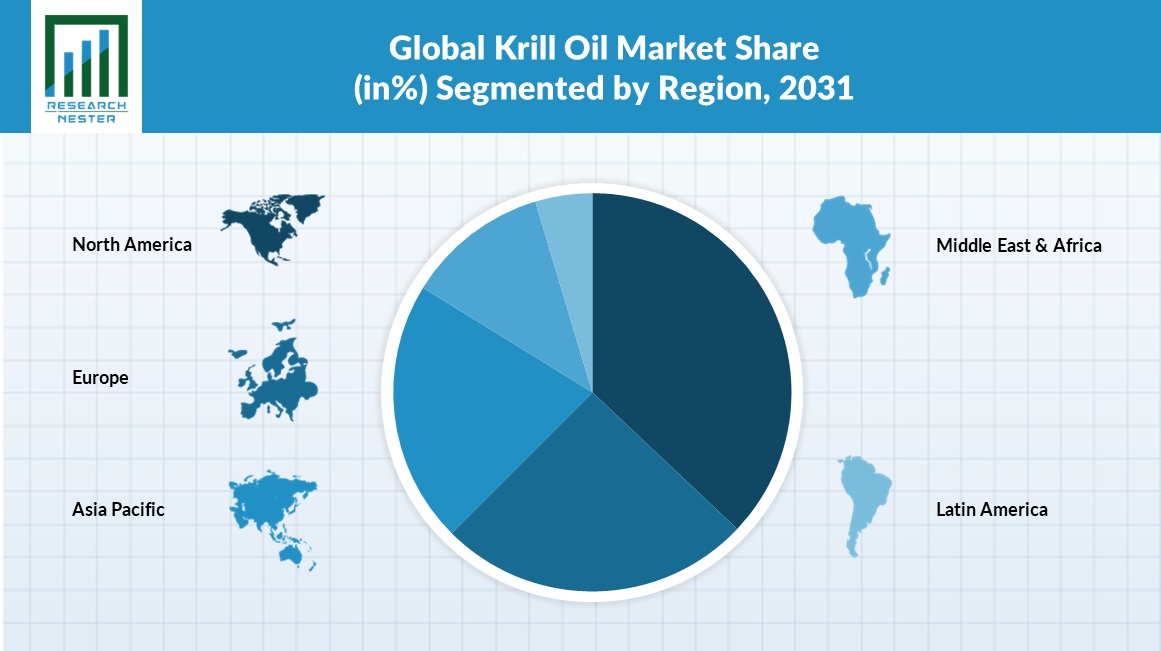 The global krill oil market is further classified on the basis of region as follows:

Our in-depth analysis of the global krill oil market includes the following segments:

1) What are the major factors driving the growth of the krill oil market?

Ans: Growing prevalence of stress and anxiety, rising number of dysmenorrhea, increasing geriatric population, and escalating prevalence of arthritis are some major factors driving the growth of the market.

2) What would be the CAGR of krill oil market over the forecast period?

3) What are the challenges affecting the krill oil market growth?

Ans: High costs of krill oil products, side-effects coupled with the consumption of krill oil, and deficit of proper regulation are estimated to hamper the market growth.

4) Which region will provide more business opportunities for growth of krill oil market in future?

Ans: The market in North America is projected to hold the largest market share by the end of 2031 and provide more business opportunities in the future.

5) Who are the major players dominating the krill oil market?

7) What are the segments in the krill oil market?

Ans: The market is segmented by form, application, and by region.

8) Which segment captures the largest market size in application segment in the krill oil market?

Ans: The dietary supplements segment is anticipated to garner the largest market size by the end of 2031 and display significant growth opportunities.