The global implantable drug delivery devices market is expected to grow at a moderate CAGR of ~8% during the forecast period, i.e., 2022-2030. The growth of the market can be attributed to the increasing prevalence of chronic diseases globally, such as cardiovascular diseases, auto-immune diseases, diabetes, and others. Additionally, the growing number of aging populations in various countries has increased the risk of getting chronic diseases. As a result, there is an increasing influx of patients for surgeries using implantable drug delivery devices, which is estimated to boost the market growth. According to World Health Organization (WHO), in 2020, approximately 10 million individuals have died due to cancer, and it has been recognized as the leading cause of death globally. Rising concern among governmental organizations for developing better medical devices to provide high-level safety standards to the patients has created significant growth opportunities for the implantable drug delivery device market over the forecast period. Moreover, the growing preference of the patients for drug delivery device products on the back of its high efficiency has also contributed towards the global market growth. CLICK TO DOWNLOAD SAMPLE REPORT 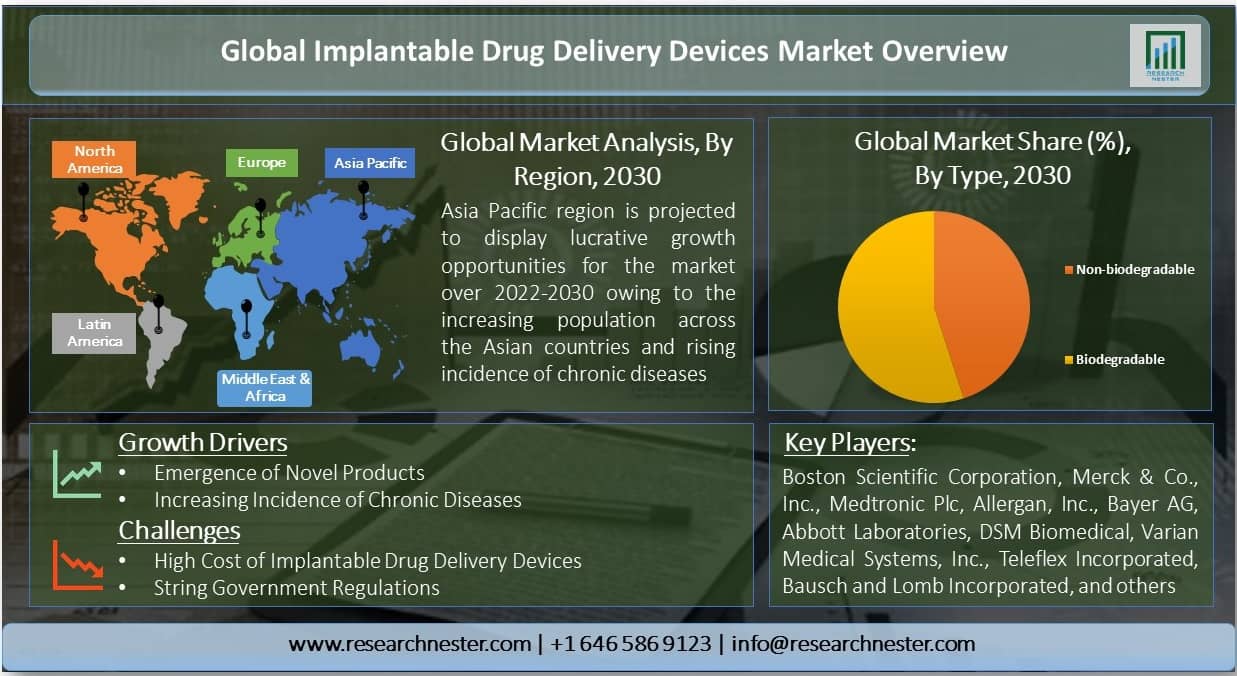 The market is segmented on the basis of products into contraceptive implants, spinal implants, brachytherapy seeds, drug-eluting stents, bio-absorbable stents, intraocular implants, infusion pumps, and others, out of which, the drug-eluting stents segment is expected to dominate the global market during the forecast period, in terms of revenue, on account of increasing implementations of these implants in the medical industry for various indications such as cancer treatment, contraception, hormone regulation, and others.

Based on type, the biodegradable products segment is expected to witness significant growth over the forecast period in the market on the back of the its advantages over non-biodegradable products, which includes easy absorption, fabrication, and excretion of inter-polymers, greater acceptance rate, positive outcome, and others.

Geographically, the market is segmented into North America, Latin America, Europe, Asia Pacific and the Middle East & Africa region. The market in the Asia-Pacific region is estimated to exhibit exponential growth over the forecast period, on account of the steadily increasing healthcare expenditure and rising concern & awareness for the development of advanced devices in the region. Additionally, the rising population among Asian countries such as China, India, and others has significantly increased the disease prevalence rate and patient influx in the hospitals and other healthcare service providers, which is expected to further boost the market growth in the region.

Furthermore, in 2022, the market in North America region held the highest shares in the global market, on the back of increasing investments by the private and governmental organizations to develop advanced implantable drug delivery devices owing to the increasing cases of cancer, diabetes, cardiovascular diseases, and others. Additionally, major implantable drug delivery product manufacturers in the North American market have increased the market’s growth. 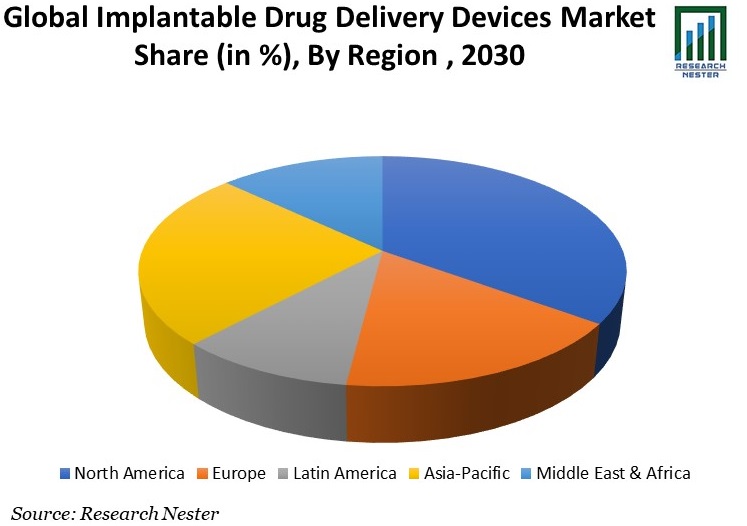 The global implantable drug delivery devices market is further classified on the basis of region as follows:

What are the major factors driving the growth of the implantable drug delivery devices market?

What would be the CAGR of implantable drug delivery devices market over the forecast period?

What are the challenges affecting the implantable drug delivery devices market growth?

The market in Asia Pacific region will provide ample growth opportunities owing to the growing population and rising incidence of chronic disorders.

Who are the major players dominating the implantable drug delivery devices market?

What are the segments in the implantable drug delivery devices market?

The market is segmented by product, type, application, end-user, and region.

Which segment under the type segment captures the largest market size in the implantable drug delivery devices market?

With respect to type, the non-biodegradable segment is anticipated to hold the largest market share on the back of increasing adoption of polymeric matrix-based systems in the medical field.