Introduction to Workwear and Uniform

Workwear uniform are referred to all those clothing which are worn for work or similar associated tasks. Earlier, the term usually involved dresses for people who were employed within trade industries as workwear were built to provide durability and safety. In the present era, workwear clothing is not just limited to industrial workers, but also includes a wider segment. Uniforms, on the other hand, just mean the clothing worn by members of an organization for performing an activity together for the organization, such as army groups and others.

According to the International Labour Organization (ILO), more than 2.78 million deaths per year occurs as a result of occupational accidents or work-related diseases. Also, some 374 million non-fatal work-related injuries happen each year, resulting in more than 4 days of absences from work.

The global workwear and uniform market is observing vibrant growth on account of increasing demand for workplace safety, so as to reduce the increasing occurrences of workplace accidents and fatalities, and the growing apparel manufacturing industry. According to the United States Census Bureau, sales, value of shipments, or revenue ($1,000) of apparel manufacturing industry in the USA for the year 2017 was 10,407,833 USD, whereas, number of establishments were 5,736 numbers. Furthermore, rising importance of workwear and uniform as a way of showing professionalism in the manufacturing and corporate sectors, coupled with growing demand for analysis of worker’s health condition at workplaces by utilizing IOT enabled controllers in workwear uniforms, are some of the notable factors that are expected to boost the growth of the global workwear and uniform market.

The global workwear and uniform market reached a value of around USD 28 billion in the year 2016 and is expected to garner a value of around USD 43 billion by the end of 2025 by registering a CAGR of around 5% across the globe over the forecast period 2018-2025. Additionally, the market is anticipated to attain an absolute $ opportunity of around USD 15 billion during the assessment period.

Growth Highlights based on Region during 2017-2025

The global workwear and uniform market is segmented by regions into North America, Latin America, Europe, Asia-Pacific and Middle East and Africa. Among these regions, the market of Asia Pacific is primarily driven by nations such as China, India and Japan, where China held the largest market share of around 41% in the year 2017. Additionally, Asia Pacific is anticipated to gain a market share of around 37% in the year 2025 on the back of being the largest textile producer in the world, growing industries in the region and on the presence of large number of labor force. The region is further known for low labor costs, world’s largest exporter of textile and clothing products, and greater FDI initiatives from developing economies in the region, which is helping to attain the interests of manufacturers from around the world to develop the region into a manufacturing hub, which is anticipated to support the growth of the market in the region. 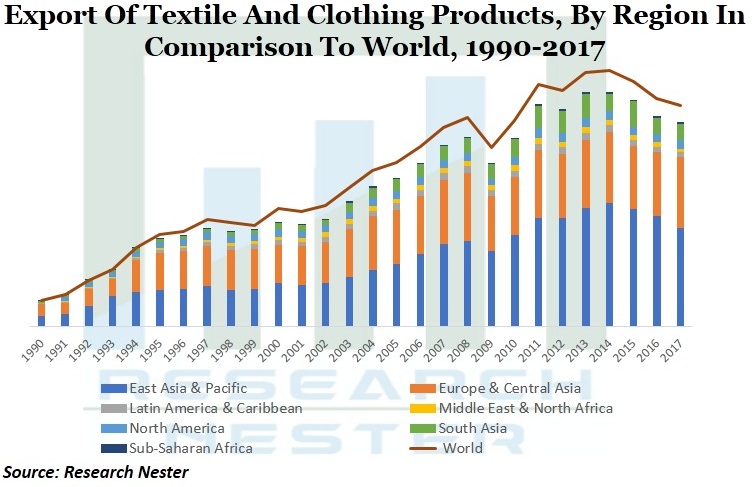 The global workwear and uniform market is segmented by product into apparel, footwear and accessories, out of which, the apparel segment is anticipated to hold largest market on account of growing demand amongst manufacturing companies to provide workwear apparels owing to safety policies. Moreover, there is a shifting focus amongst enterprises for apparels which can withstand different temperatures and fabrics that weigh less to suit different work environments, which is anticipated to fuel the growth of this segment.

The global workwear and uniform market is also segmented by type into general workwear, corporate workwear, uniforms, anti-flaming, anti-acid or chemical protective and others. The corporate workwear segment in anticipated to grow at a significant pace owing to the growing trends of workplace fashion and the availability of varied options for dressing. Additionally, the anti-acid or chemical protective segment, which was valued at around USD 10 billion in the year 2017 is anticipated to grow at a CAGR of around 5% during the forecast period.

With technical advances in the manufacturing industry, numerous advanced machineries are deployed which operate in extreme environments. Owing to such a factor, it is necessary for the workers to be in appropriate workwear which can withheld such harsh environments and act as a precautionary measure for the worker, which is the raising the demand for continuous research and developments in the innovation of advanced fabric and materials.

Growing demand amongst enterprises for such advanced workwear which are made of high-end fabric materials, innovated from research and developments, and to mitigate dangers associated with harsh working environments, is contributing to the growth of the global workwear and uniform market.

Growing Workforce Base in Enterprises

The workforce base across industries is growing owing to rise in employment levels in various industry verticals, which is raising the demand amongst enterprises for the procurement of larger number of workwear for their workforce. According to the United States Department of Labor, the employment level grew from 136,559 (number in thousands) in 2000 to 154,482 (number in thousands) in 2018. 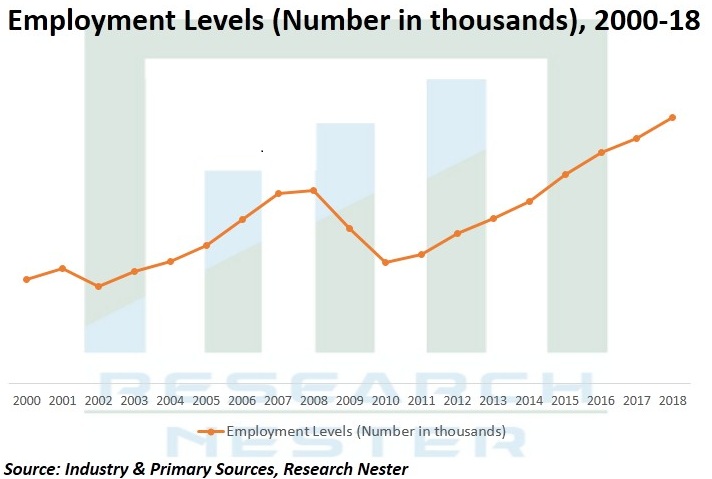 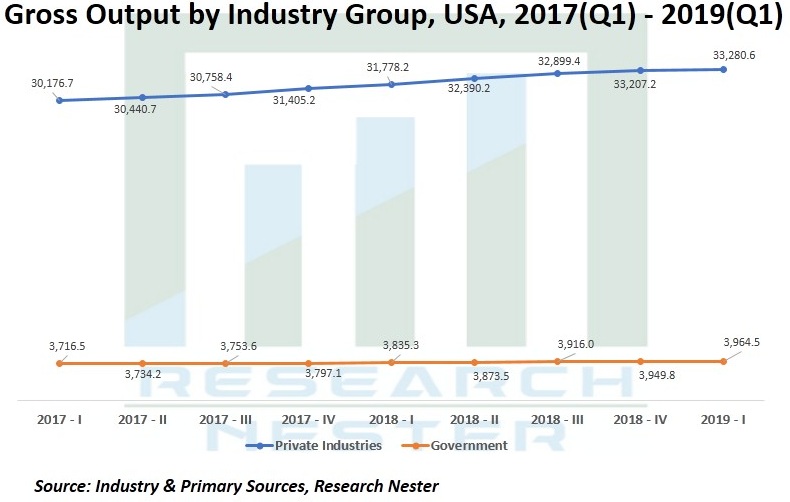 1) What are the major factors driving the growth of the Workwear and Uniforms market?

Ans: Increasing trends for fashionable and functional clothing along with the increasing workforce base across industries and the growing enterprise and business sector are some of the major factors that are driving the growth of the market.

2) What would be the CAGR of Workwear and Uniforms market over the forecast period?

4) Which region will provide more business opportunities for growth of Workwear and Uniforms market in future?

5) Who are the major players dominating the Workwear and Uniforms market?

7) What are the major segments in the global workwear and uniform market?

Ans: The market is majorly segmented by type, product, services, demography, application and by region.

8) What can be the significant growth opportunity for the type segment in the global workwear and uniform market?

Ans: The corporate workwear segment, which is a sub-segment of the type segment, is anticipated to grow at a significant pace over the forecast period owing to the growing trends of workplace fashion and the availability of varied options for dressing.

8) What are the restraining factors for the global workwear and uniform market?

Ans: Growing concerns for the lowering sales of players operating in the workwear and uniform market owing to the availability of substitutes for workwear uniforms are some of the factors anticipated to act as a barrier towards the growth of the market.