Wind energy is classified under clean energy as it generates electricity without any environmental impact. Wind turbine converts the kinetic energy from the wind into electrical energy using the aerodynamic force created by the rotating blades. When the wind flows across the blade, it is utilized by wind turbines to generate electricity. The variation in air pressure around both the blades creates both lift and drag. All wind turbines are designed for survival speed with respect to their utilization and design.

In a pitch controlled wind turbine system, the electronic system generally adjusts the blades a few degrees every time the wind speed changes in order to keep the rotor blades at an optimal angle and to enhance the output for wind at all speeds.

Wind turbine pitch system market is anticipated to grow steadily based on increased awareness about the usage of renewable energy. Increase in demand of power supply around the globe is another factor contributing to the growth of the market. Apart from the high initial setup cost, the cost of maintaining turbines and generating wind power is economical. As compared to generating electricity from burning fossil fuels, the wind turbines generate electricity from wind energy. Such utilization of wind energy is encouraging countries from around the globe to adopt this as an option with respect to conventional power generation systems. The pitch control system is one of the most widely used control techniques in all available options to regulate the output power of a wind turbine generator. These factors are anticipated to boost the growth rate of this market.

Awareness about the Usage of Renewable Energy

The rising awareness about the benefits of using renewable energy is the driving force behind the growth of the wind turbine pitch system market. Wind turbine uses wind as its raw material and does not affect environment adversely. Moreover, most of the countries are signatories to international protocols under United Nations Framework Convention on Climate Change (UNFCCC) in which they have to develop clean energy mechanism to support reduction of greenhouse gases. This is anticipated to fuel the growth of the market.

Increase in Demand for Power Supply

Rising rate of power consumption is driving the demand for power supply across the world. With the rigorous industrialization and urbanization, the demand for power supply has increased many folds in last few years. Additionally, the demand from countryside and rural areas has been increasing. Wind turbines play a key role in supplying electricity to remote areas. According to a survey, power generated by wind is anticipated to be third leading source of energy generation around the globe by 2050. These factors are anticipated to drive the growth of the market during the forecast period.

The initial setup and the overall cost of installing wind turbines is high which is expected to negatively affect the growth of the market during the forecast period.

Asia Pacific is anticipated to account for major share of the wind turbine pitch system market. The region has one of the highest wind power installed capacity in the world. Countries such as China and India are experiencing high rate of industrialization and urbanization. These countries possess required geographical locations such as large coastal areas and open plains for production of wind energy. The market in North America and Europe is estimated to hold significant share of the market after Asia Pacific owing to the favorable climatic conditions. According to EIA, out of all the renewable forms of energy generation, wind energy accounted for the highest generating capacity of 8% in the United States during 2016. Consumption of wind power is estimated to be on track of solid growth in Europe over the forecast period riding on the back of increased initiatives and investment towards clean energy generation. 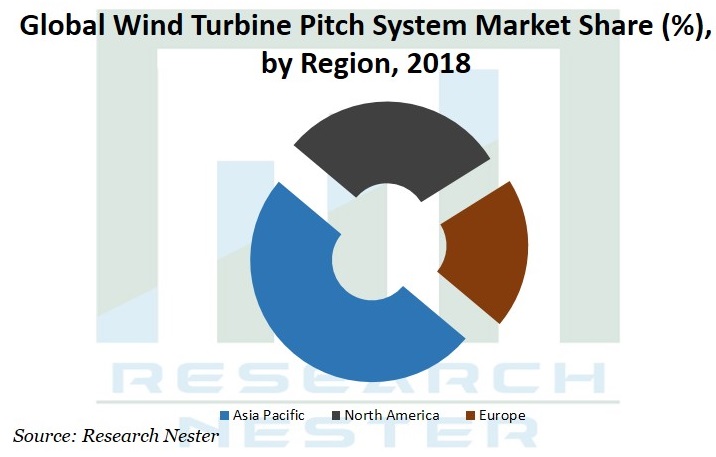 The wind turbine pitch system market is further classified on the basis of region as follows: