Underwater Robotics are referred as the branch of robotics for ocean exploration and utilization. Exposed aquaculture, subsea oil & gas factories and deep sea mining are few major factors positively influencing the development of technology. Underwater Robots have the capability to travel underwater with or without the need from an operator. These robots constitute some portion of the bigger gathering of the undersea frameworks known as the unmanned submerged vehicles, a characterization which incorporates non-independent remotely operated underwater vehicles (ROVs). In military applications, these robots are majorly known as the unmanned undersea vehicle (UUV). Submerged lightweight flyers are the subclass of the Autonomous underwater vehicles (AUVs). It is able to perform functions such as the equipment repair, searching and recovering, the inspection, the scientific analysis, the cable-laying, surveying, searching and trenching. These robots are used for continuous oceanic surveillance.

Robots are being used extensively in the manufacturing sector. Huge developments are being made in the military and law enforcement applications by robotics, thus improving the defense infrastructure. This is positively contributing to the growth of the global market. They are designed to work in challenging environments where the safety and accessibility of divers is compromised. They are used in applications such as maritime security, underwater archaeology and marine biology and play an important role in development of offshore industry. Rising adoption of underwater technology across the world is projected to accelerate the growth of the market during the forecast period (2019-2027).

The underwater robotics market is anticipated to record a CAGR of around 15.65% over the forecast period. The market is segmented by type into ROV and AUV; by application into commercial exploration, defense & security, scientific research. ROV segment is projected to hold the largest market share owing to its wide application in drilling, development, repair, and maintenance operations for offshore oil and gas exploration while overcoming the limitations of human subsea divers. 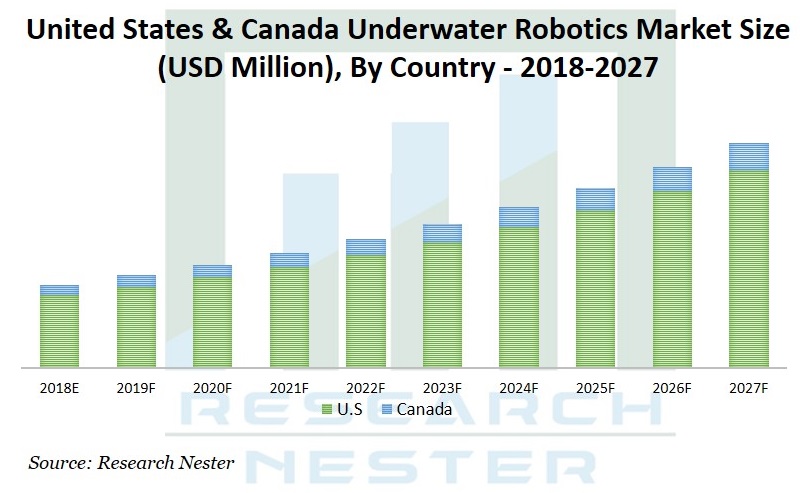 The market is attributed to the rising investments in defense sector across the world. For instance, the United States Department of Defense announced an investment of USD 600 million over the period of 2016 to 2020 for the development of variable payload unmanned undersea vehicle capabilities. The investment was majorly made by the US navy to improve intelligence, surveillance and rescue operations, acoustic surveillance, mine countermeasure and anti-submarine welfare operations. Further, it also helps in stalking the enemy ships and protecting the harbors as well as the mine sweep for improving country’s navel security. These factors are estimated to provide a conducive platform for the development of advanced robotic system and is expected to contribute significantly to the underwater robotics market revenue.

For instance, in July 2017, the U.S. Defense Advanced Research Projects Agency (DARPA) signed a contract of USD 4.6 Million with BAE Systems.to develop Unmanned Underwater Vehicle (UUV) to supplement manned submarines, aiding them to detect targets by sending sonar pulses. Sensors used in underwater robot has vast applications in industrial sectors. Further, research and development has helped in developing advanced imaging system which is used at low depth and can trace the enemy ship in the water. Increasing focus on innovation by DRDO for advanced defense equipment is estimated to boost the growth of market during the forecast period.

The underwater robotics market is further classified on the basis of region as follows: