Solar charged jacket is a type of jacket that glows in the dark without the help of any power source. The jacket is made from a highly responsive phosphorescent compound which is engineered into the ultra-thin layer membrane of the jacket. When the jacket is brought into contact with an emitting light source, such as the broad day light of the sun or any electrical light emitting device, the jacket absorbs and stores the energy from the emitting light source. Once the jacket is exposed into the dark, the phosphorescent compound slowly re-emits back the stored energy by glowing into a green color. The principle for the intensity of the glowing green light emitted by the jacket is directly proportional to the amount of darkness prevailing in the environment. 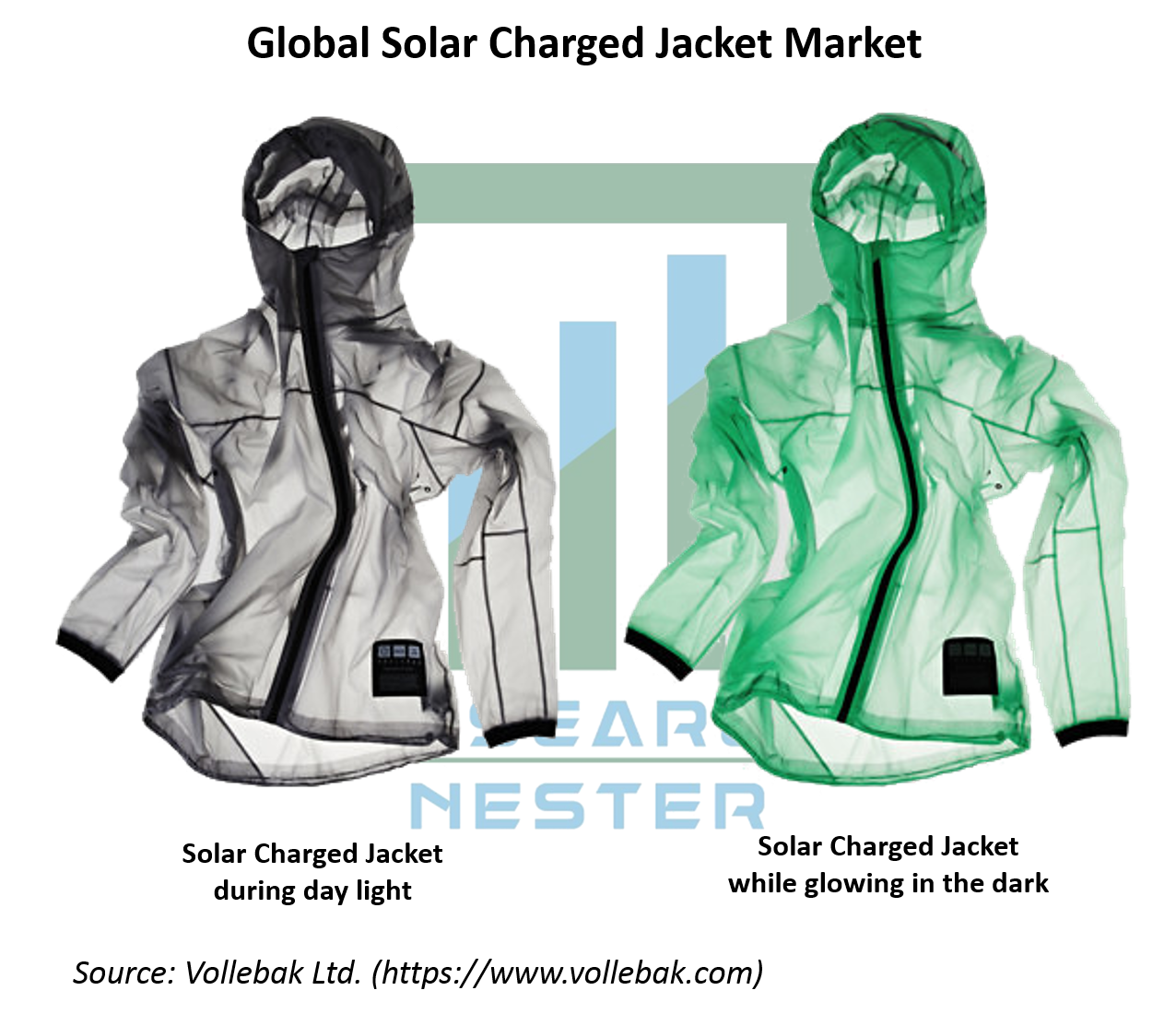 The global solar charged jacket market is anticipated to grow on the back of growing need for jackets that are light weight and durable. Light weight jackets have several benefits over other jacket types. These jackets are known to provide maximum comfort to its users due to its light weight and high breathability. Moreover, the light-weight jackets are also preferred by many users for its easy portability as the jackets can be packed into a small size. Moreover, growing merchandise trade for clothing commodity around the world is also anticipated to promote towards the growth of the global solar charged jacket market. According to the World Trade Organization (WTO), exports of clothing commodity around the world increased from USD 354819 Million in the year 2010 to USD 494076 Million in the year 2018. 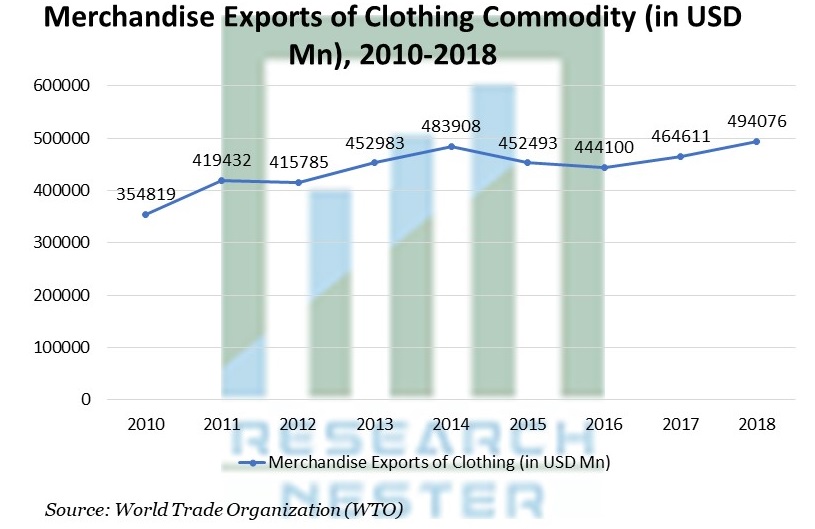 The global solar charged jacket market is anticipated to record a robust CAGR throughout the forecast period, i.e. 2020-2028. The market is segmented by end user into adventurer, athletes, rescue operations personnel, forest officials, entertainers and others, out of which, athletes segment is anticipated to hold the largest market share on the back of rising need amongst athletes for clothes that make out their perfect workout wear. Athletes around the world are very conscious when it comes to choose the right outfit owing to the strict regulations in their dressing patterns that prevail across the different types of games. They choose for outfits that can provide them comfort and can also withstand wear and tear. Moreover, several other important factors such as the breathability, durability, elasticity and waterproofing capability of the fabric play an important role while choosing an outfit. Solar charged jackets is designed as a sports and leisure wear and it happens to have all the features of a sportwear. The elasticity of the fabric of the jacket is such that it can eventually indulge into the shape of a person’s body while running, climbing or riding. It is engineered for movement and also has waterproofing ability. Moreover, the laser cut and welded underarm vents of the jacket provides added room for ventilation making the jacket highly breathable and a preferred choice amongst the athletes. CLICK TO DOWNLOAD SAMPLE REPORT 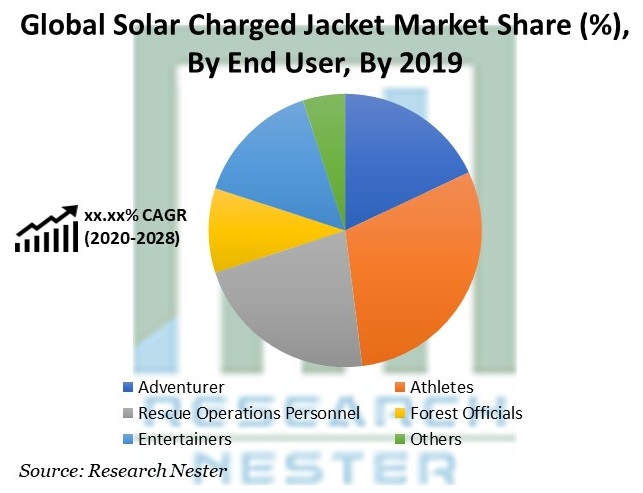 The concept of adventure tourism in the recent era have multiplied tremendously amongst individuals around the globe. Backed by rising household income of individuals along with the increasing spending for tourism activities and favorable support for the development of tourism industry by the government of nations around the globe, activities such as climbing, hiking, caving, rafting and others have grown exponentially over the years. Several adventure activities such as mountaineering, camping, trekking, rock climbing, mountain biking and others involve a high degree of life risks. As such, there is a surge in demand for appropriate outfits required for such type of adventure activities. The phosphorescent compound present in solar charged jackets helps it to glow in the dark. As a result, it is a great outfit for high risk involving adventure sports, as in the case of an incident which might involve search and rescue operations, the rescue operator can easily search for the person wearing the solar charged jacket. Such a factor is thereby anticipated to drive the growth of the global solar charged jacket market during the forecast period.

Rising Awareness for the Benefits of Sports

Playing sports provides several health benefits such as improved cardiovascular health, lower risk of heart diseases, weight management, relieve from stress, and several others. As a result, several governmental organizations from across the globe are creating awareness with the benefits associated with playing sports. For instance, The Association For International Sport for All (TAFISA) has set the TAFISA Mission 2030 which aims to provide a foundation for action and growth of the Sport for All and physical activity Movement to create a better world between now and 2030. As such, with the growing acceptance for sports activities in day to day life of individuals, there is a surge in the demand for professional sports wear that also meets the purpose of fashion. Products such as solar charged jacket are designed with all the features as required for sports persons and also adds to the trend in fashion apparels. Such a factor is anticipated to drive the growth of the global solar charged jacket market in the upcoming years.

Owing to less competition and more of a monopoly product, the solar charged jackets are priced comparatively high which might hamper the sales of the manufacturer. Such a factor is anticipated to act as a barrier to the growth of the global solar charged jacket market.

Europe is anticipated to hold the largest market share on the back of increasing demand for apparels in the region along with the prevalence of knowledge and awareness for apparels that meet both the purpose of work and fashion needs. Apparently, there is a rising demand for sports apparels in the region on the back of presence of several popular sports such as soccer, tennis, basketball and others. According to another statistics by WTO, European Union was the largest importer for clothing sector with an import value of USD 198,142.3 Million.

The global solar charged jacket market is further classified on the basis of region as follows:

Currently, Vollebak is the only market player that is offering solar charged jacket. Vollebak is a UK based company that aims to use science and technology extensively for designing clothes of the future. The company launched solar charged jacket in the year 2018 and is working towards the launch of several new clothing products. Several market players in the apparel industry are also working towards innovations in bringing out such jackets that would focus on offering comfort, fashion and luxury driven experiences to their users.