The Tether – Vertebral Body Tethering System is the first spinal tether device that recently received approval by the US Food and Drug Administration (FDA). The device, developed by Zimmer Biomet, intends to treat idiopathic scoliosis among children and adolescents and can be used as an alternative to other forms of scoliosis treatments such as bracing and fusion surgeries.

Scoliosis is a medical condition that affects the spinal cord of a person, resulting in the formation of a sideways curvature in the spine. When this disorder occurs among children, which is very common, it is known as pediatric scoliosis. Scoliosis can be caused due to some other major disorders such as cerebral palsy and muscular dystrophy. It can even begin to form as a result of the genetic composition of a person. The disorder is capable of causing severe deformities in the body if not treated at an early stage. The main symptoms of scoliosis are pain in neck and back, respiratory and cardiac disorders. Scoliosis can be diagnosed with the help of x-ray of the spine along with additional CT scan and MRI scans in case of tumors.

According to the National Scoliosis Foundation, scoliosis affects around 2-3% of the population in the United States every year, which is estimated to be around 7 million people in the country. The disorder is mostly diagnosed among children between the ages of 10 and 15 and is much more likely to occur among girls as compared to boys.

The pediatric scoliosis treatment market is anticipated to record a significant CAGR over the forecast period i.e. 2019-2027. The market is segmented by scoliosis type, by treatment and by region, out of which, the treatment segment is further segmented into physical therapy, scoliosis braces, surgery and others. Based on treatment methods, the scoliosis braces segment is anticipated to hold the largest share in the pediatric scoliosis treatment market on account of increasing preference of braces for the correction of this disorder among children. As surgery is not recommended for people below a certain age, braces are estimated to have a high demand for the prevention of any further growth in curvature of the spine till the person grows old enough for surgical treatment. A study on scoliosis surgery was published by the International Journal of Orthopaedics Sciences in 2017 that was conducted on patients with scoliosis between the ages 8-56. The data of scoliosis surgery cases occurring from 2009 to 2016 was collected and analyzed. It was found that scoliosis surgery effectively treats and corrects various forms of scoliosis and has minimal complications. 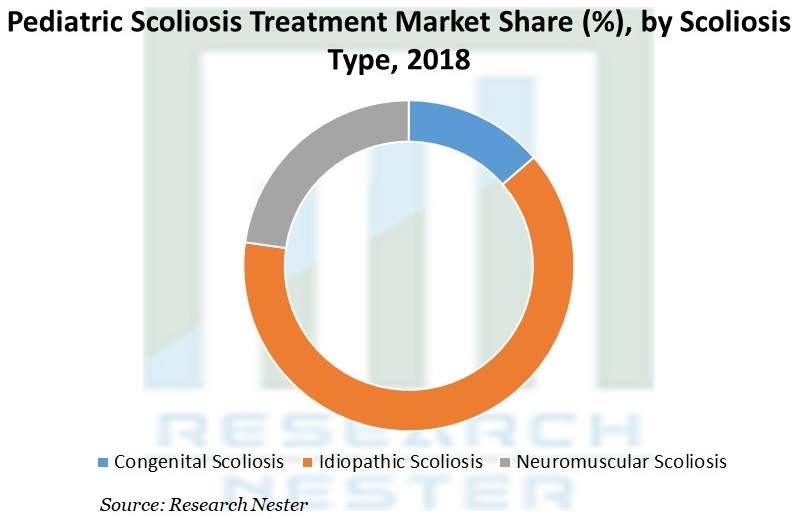 The large number of children suffering from scoliosis and other back problems is raising the demand for improved and effective treatment methods for the disorder and is thus estimated to increase the market growth during the forecast period.

Increasing Research And Development Activities To Propel The Market Growth

Statistics presented by UNESCO state that expenditure on research and development contributed towards an estimate of 2.2% of the world’s GDP in 2016. Moreover, the R&D expenditure in North America region was around 2.65% of the GDP, while it was calculated to be around 2.1% of the GDP in China in the same year. The growing government funding and initiatives for various research and development activities by a large number of developed and developing regions for the treatment and management of scoliosis is a major factor estimated to boost the market growth.

Limited Availability Of Treatment Methods To Restrict The Market Growth

The lack of skilled professionals, stringent FDA approval and limited number of scoliosis treatment methods available for the patients, especially children, is a major growth restraining factor and is anticipated to hamper the growth of pediatric scoliosis treatment market.

Our in-depth analysis of the pediatric scoliosis treatment market includes the following segments:

Pediatric scoliosis treatment market in North America is anticipated to retain the largest share in the market on account of rising advancements in the medical industry which result in development of new treatment methods for scoliosis. Presence of the prominent market players in this region is another factor estimated to support the growth of this market. The market in Asia-Pacific is anticipated to observe the highest growth during the forecast period as a result of increasing research and development activities and improving healthcare infrastructure in the region.

The pediatric scoliosis treatment market is further classified on the basis of region as follows: