Nail care is one of the most essential part that plays an important role in fashion as well as health and for other hygiene concerns. With growing sense of self care and awareness regarding fungus infection, especially among people with diabetes, the majority of people are driven towards the maintenance of fingernails and toenails.

According to a survey in 2018, more than 100 million women used nail care products in the United States. It is believed that women aged between 15 and 29 years are the major nail polish users which is closely trailed by the women in the age group of 30-60 years. In U.S., more than USD 8.3 Billion were spent on nail care services during 2017. The majority of nail techs are employed in California and Texas. These factors are estimated to make nail care as the most appealing business among the present and forthcoming market players around the globe.

The market is observing a noteworthy growth on account of changing lifestyle and fashion trends across the world which is not just limited to young women population but has diversified to people in all age groups, irrespective of the gender.The global nail care market is anticipated to record a CAGR of around 5% over the forecast period i.e. 2016-2024. The market is segmented by product type into nail polish, nail polish remover, nail extensions, manicure products and pedicure products among others, out of which, the nail polish segment is anticipated to have leading market shares on account of its growing demand and availability in diversified sets of color and textures. Additionally, the growth in nail polish segment is also estimated to augment the demand for nail polish removers in the market.

North America nail care market grew by 11.8% from 2013-2014 and it is further anticipated to grow with almost same Y-O-Y groth in the upcoming years.In Asia Pacific, Japan is the major market for the nail care owing to increasing popularity of manicures in the country followed by China. In addition to that, India and China, Malaysia, Thailand are projected to be the emergent countries for the nail care market.Europe nail care market is believed to flourish from increase in total number of beauty salons and nail bars in the region over next few years. CLICK TO DOWNLOAD FREE SAMPLE REPORT 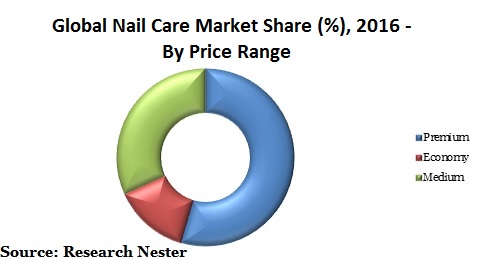 Increasing urbanization and affordability of consumers along with the rising disposable income of people around the globe are some of the major factors that are supporting the growth of the market. Further, the rising trend of honing self-appearance and beauty consciousness coupled with growing competition between giant market players in the nail care market to bring forth varied nail care products keeping in mind the preference  of their customers and their demand for specified goods such as non-toxic and organic products is estimated to boost the market shares in upcoming years.

Awareness Regarding Bacteria & Other Infections

With growing rate of awareness regarding bacteria and other infections concerning fingernails and toenails around the world, there is an increase in the number of people who are adopting self-care treatments and products so as to keep these problems at bay. These factors are estimated to augment the growth of the market over the forecast period.

There are certain side effects which are associated with the chemicals present in the nail care products that have harmful effects on the health of consumers such as irritability, nausea, headache etc. These factors are estimated to hinder the growth of the market over the forecast period.

Our in-depth analysis has segmented global nail care market into the following segments:

North America and Asia Pacific are anticipated to have highest market shares in the global nail care market. This can be attributed to the growing demand for nail care products on the back of changing fashion trends and increasing rate of fashion-oriented population in these regions. Further, the presence of major fashion capitals such as Paris, Milan, London, Barcelona and Berlin in Europe is estimated to boost the nail care market revenue in Europe region.

Global nail care market is further classified on the basis of region as follows: