The global fluorescent pigment market attained revenue of USD 374.8 Million in 2020 and is estimated to garner USD 543.6 Million in 2028 by growing at a CAGR of 4.9% over the forecast period i.e., 2021-2028. The fluorescent pigments are used for security, coding, identification, and anti-counterfeiting, in currency notes, lottery tickets, credit cards, emergency signs, security passes, and others. Other than currency and security applications, fluorescent pigments are also used in restaurants, hotels, discotheques, nightclubs, and several other places due to the glowing effect across the globe. These tend to be modified in a manner, which can change the character to detectable and measurable levels. The increase in luminescent usage excited by UV and IR is increasing due to security printing and counterfeiting prevention. The other use includes brand protection and security of the product by creating invisible security marks and features and identifying and preventing the loss. 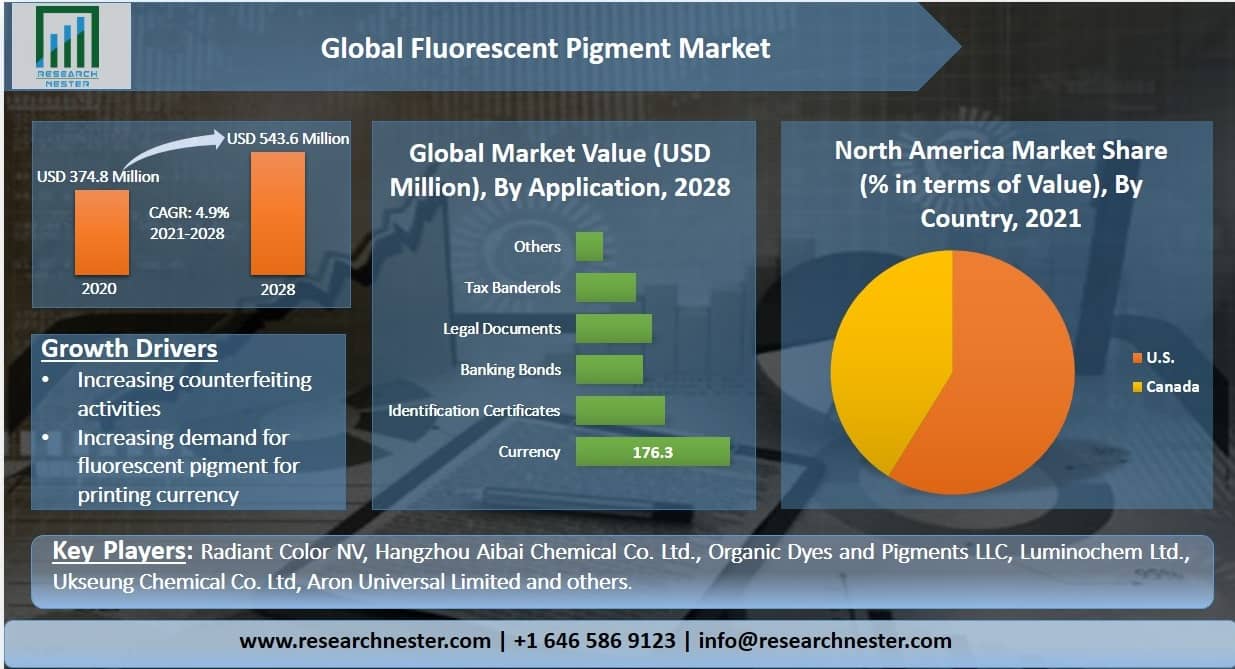 Geographically, the global market is segmented into five major regions comprising North America, Asia Pacific, Europe, South America, and Middle East & Africa. Among the markets in these regions, the Asia Pacific fluorescent pigment market is estimated to hold leading market share throughout the forecast period by attaining a revenue of 106.7 USD Million in 2021 and 158.2 USD Million in 2028, and growing at a CAGR of 5.8%, due to the increasing frauds in identification certificates and banking bonds. In 2018, Chinese police seized a million fake identity documents after an investigation and this racket was operating across 20 provinces. The fake papers include various certificates ranging from resident’s identity cards to birth certificates, passports, English test certifications, and driving licenses. Owning to the above fraud, the Chinese government is trying to improve fluorescent pigment quality used in identification certificates. China in the Asia Pacific region is expected to garner a revenue of 24.9 USD Million in 2021 while the number for Japan is projected to be 20.1 USD Million for the same year. Countries like South Korea, Japan, and China are very advanced in terms of manufacturing pigments used for currency and security purposes. The region has the headquarters of some of the largest fluorescent pigment manufacturers, such as Huangshan Jiajia fluorescent material Co., Ltd., Wanlong Chemical Co., Ltd., UKSEUNG CHEMICAL CO., LTD., and others. Counterfeit currency crimes in Japan and South Korea are very low due to the use of fluorescent pigments in the currency.  The fluorescent pigments were also used extensively to prevent counterfeiting of currency after demonetization in India, as during demonetization, the crimes related to fake currency rose drastically. North America market is projected to hold second leading stance by garnering a revenue of 128.7 USD Million in 2021 and 178.7 USD Million in 2028 owing to the large manufacturers in the region and increasing counterfeiting activities. According to US Federal Reserve, more than USD 2 trillion of Federal Reserve notes are in circulation in the country, and approximately 0.1% of these are fake. Several anti-counterfeiting technologies, such as advanced digital printing technologies, are used to overcome such activities. In North American region, the United States is projected to generate significant growth opportunities for the market growth by attaining a revenue of 75.7 USD Million in 2021 due to significant manufacturers presence. 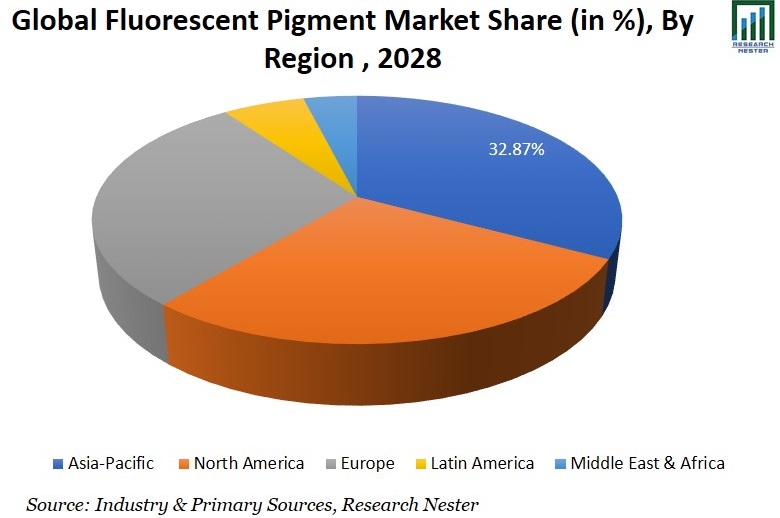 The growing consumption of fluorescent pigments in the US is due to the circulation of counterfeit currency that impacts the economy significantly. Fake currency leads to an unauthorized increase in the money supply. The different fluorescence of security thread used in the US currency is yellow, green, red, and blue for USD 50, USD 20, USD 10, and USD 5 currency denominations, respectively. These fluorescent threads are used to evaluate the authenticity of the US currency using fluorescent instrumentation. While, Canada is projected to reap 53.0 USD Million in revenue during the same year. the increase in the demand for fluorescent pigment for printing currency leads to the growth of the fluorescent pigment market for security and currency application. According to the Bank of Canada, the circulation of fake Canadian dollars in the country is increasing extensively, leading to the development of different technologies to combat counterfeiting. Currency counterfeiting comes under section 462 of the criminal code of the National Anti-Counterfeiting Bureau (NACB). The notes in the country use micro printing using fluorescence pigment for security against counterfeiting. Additionally, the presence of major players Honeywell International Inc., Angstrom Technologies Inc., Jet-made Canada Inc., Brilliant Group, Inc., Dayglo Color Corp., A.S. Paterson Company Limited, and others in this region has created significant growth opportunities for the market. CLICK TO DOWNLOAD SAMPLE REPORT 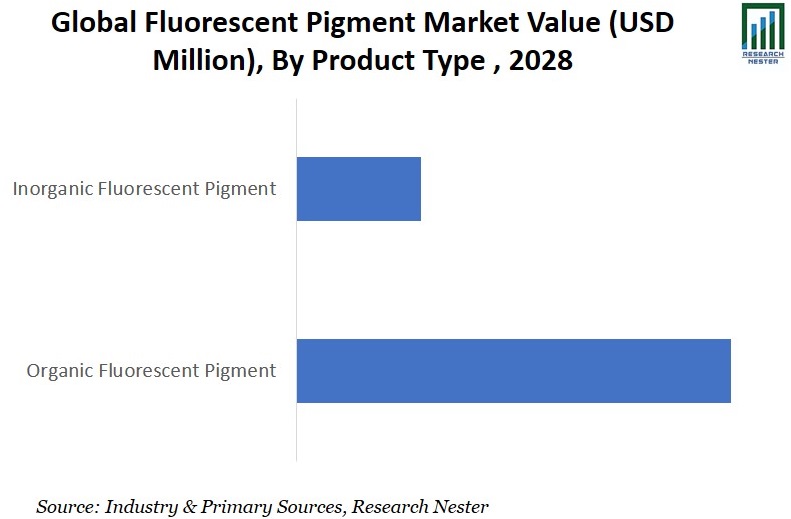 What are the major factors driving the growth of the fluorescent pigment market?

Increasing counterfeiting activities and rising demand for fluorescent pigment for printing currency are the major factors responsible for the growth of the market.

What would be the CAGR of fluorescent pigment market over the forecast period?

What are the challenges affecting the fluorescent pigment market growth?

Processing challenges while handling the fluorescent colors and cost intensive new technologies are estimated to act as barriers to the market growth.

Which region will provide more business opportunities for growth of fluorescent pigment market in future?

North America is estimated to create notable growth opportunities for market growth over the forecast period.

Who are the major players dominating the fluorescent pigment market?

What are the segments in the global fluorescent pigment market?

The market is segmented by product type, application, and state.

Which segment captures the largest market size in end-user segment in the global fluorescent pigment market?

The currency segment is anticipated to hold largest market size in value and is estimated to display significant growth opportunities.