DC or direct current cable is a type of electrical cable which are used to connect two or more devices and transfer electrical signals from one device to the other. DC electric cables differ from AC electric cables on the back of several characteristics, such as area of application, power loss during transmission, power carrying capacity and others. Electric current in a DC cable flows throughout the whole cross section diameter of the conductor whereas in an AC cable, the current flows through the outer surface owing to skin effect.

The DC electric cable market is thriving on the back of increasing urbanization and rapidly growing building infrastructure, coupled with growing deployment of solar panels, increasing deployment of HVDC transmission and rise in the number of electronic devices. Additionally, rising consumption of energy worldwide on the back of growing demand for electrical and electronics is raising the need for implementation of safe and secured electrical distribution systems, which includes wires and cables, appropriate connectors, and others, which is also anticipated to contribute towards the growth of the global DC electric cable market. Furthermore, rising concerns for safety and fire related occurrences held on the back of deployment of inappropriate wires and cables specified for use in electrical and electronic systems is also expected to contribute significantly towards the growth of the global DC electrical cable market. According to the statistics by the National fire Protection Association (NFPA), share of home fire occurred from wiring and related equipment constituted to 67% in-between the period 2012-2016. 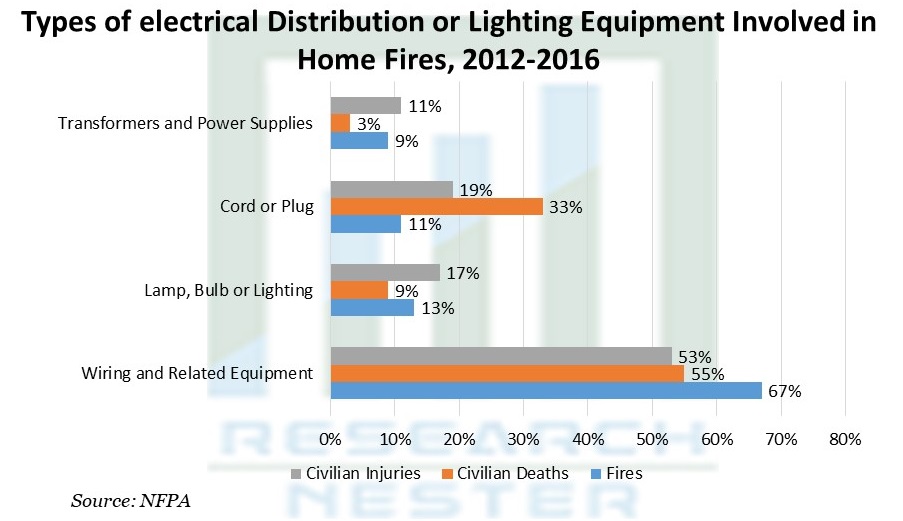 The market is anticipated to record a robust CAGR throughout the forecast period, i.e. 2020-2028. The global DC electric cable market is segmented by end user into utilities & power grids, IT & telecom, automotive & transportation, electronics and others, out of which, utilities & power grids segment is anticipated to hold the largest market share owing to shifting trend for cost efficient power distribution, along with growing trend of smart grid electricity distribution systems. DC electric cables (string DC cables) are widely used in connecting solar panels to the solar charge controller system. Further, main DC cables are utilized in connecting the system to the grid. Additionally, automotive and transportation segment is anticipated to gain significant market share in the global DC electric cable market on account of rising production of automobiles around the globe and rising demand for electric vehicles. Vehicles are powered with DC batteries owing to which, DC cables are deployed for the overall wiring of the vehicle. According to the statistics by the International Energy Association (IEA), electric car deployment in the world increased from 0.23 million in the year 2013 to 3.29 million in the year 2018. CLICK TO DOWNLOAD SAMPLE REPORT 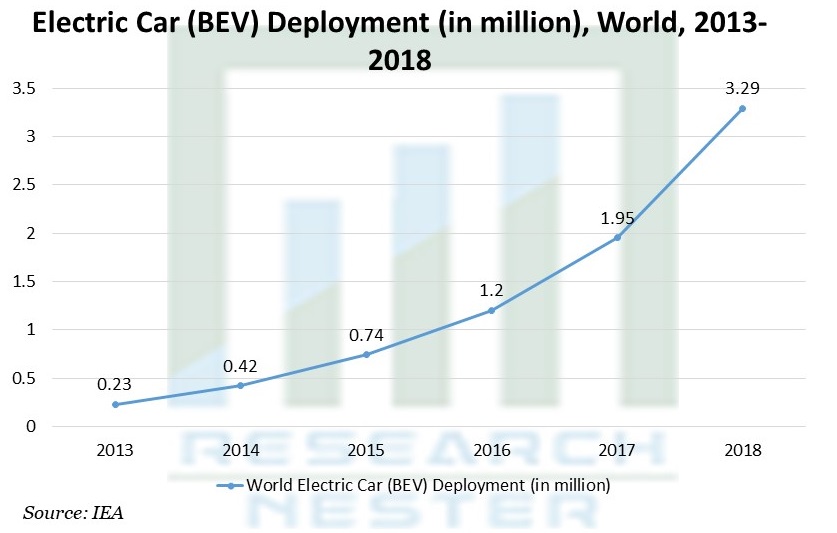 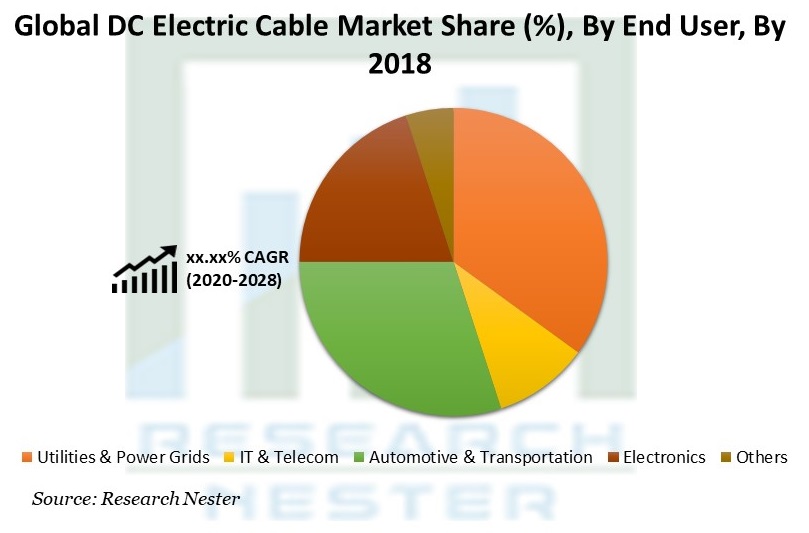 According to the U.S. Energy Information (EIA), electricity transmission and distribution losses as a percentage in the U.S.  increased from 4.67% in the year 2015 to 5.12% in the year 2017. 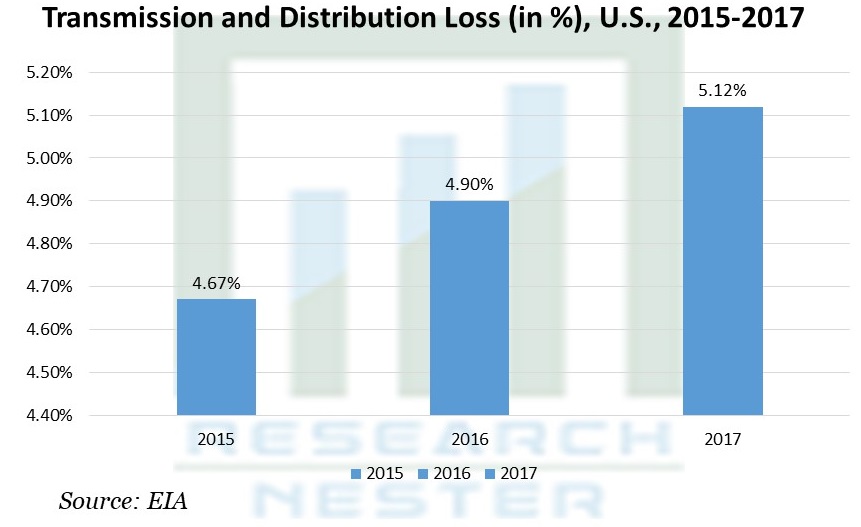 There is a rising concern amongst power distribution agencies for the loss generated during transmission of electricity between two interconnected grids. DC cable transmission have lower losses than a corresponding AC cable link. Usually, converter station losses are normally as low as 0.6% per station, and DC cable losses are only around 0.3-0.4% per 100kms. Moreover, for cable links longer than 40-50km, DC electric cables provides lower investment costs, compensating on the back of installing only one DC cable instead of three AC cables. Additionally, long AC cables produce high amounts of reactive power which results in the requirement of shunt reactors at both ends and reducing the active power transmission capability. DC cables do not observe such drawbacks when compared to the AC cables. Furthermore, DC links can connect two asynchronous power grids and the high controllability of the DC system helps in the operating conditions of the interconnected grids. 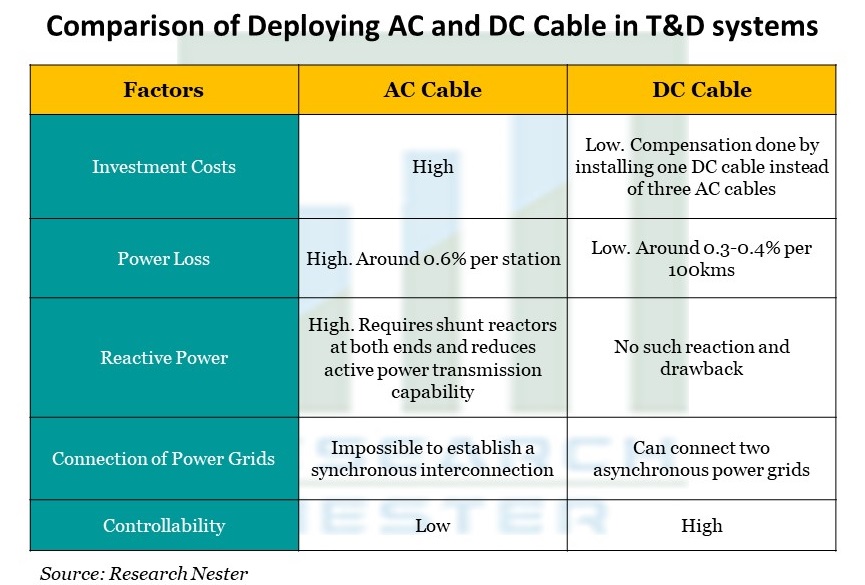 Growing concern for the environment is raising the demand for renewable energy sources, such as solar energy, wind energy, geothermal energy and others. DC electric cables are lifelines of the solar power plant as they play a significant role on the overall power output as well as to reduce the performance issues observed in solar panels. Moreover, rising deployment of solar panels around the globe is anticipated to raise the demand for DC solar cables. As solar panels are deployed outdoors, it is very important to utilize cables which can bear the harsh outdoor conditions, such as, direct sun radiation, air humidity, and others, and should have the characteristics of UV-resistance. DC electric cables provide a wide range of characteristics that meets the basic necessity for the deployment of the cables in solar panels. On the back of being able to withstand mechanical stress, being suitable for a large temperature range, are abrasion resistant, acid and base proof, have dielectric strength, and are also flame-retardant and halogen free, which makes DC electric cables the best suitable cable for solar panels.

Lack of Awareness for DC Cables

Unavailability of proper knowledge for the utilization of DC cables amongst consumers is anticipated to hinder the growth of the global DC electric cable market during the forecast period.

Asia Pacific is anticipated to hold the largest market share on account of growing investments for renewable energy in the region. The demand for DC electric cables for solar energy and wind energy, along with the demand for HVDC cables is anticipated to rise with the increasing deployment of renewable energy sources. Furthermore, it is anticipated that there will be a rising demand for power distribution generated from the renewable sources, impacting positively towards the deployment of HVDC transmission cables for long distance and efficient transmission. According to the International Renewable Energy Agency (IRENA), investments for renewable energy in Asia and Oceania grew from USD 81.6 billion in the year 2011 to USD 150 billion in the year 2018. 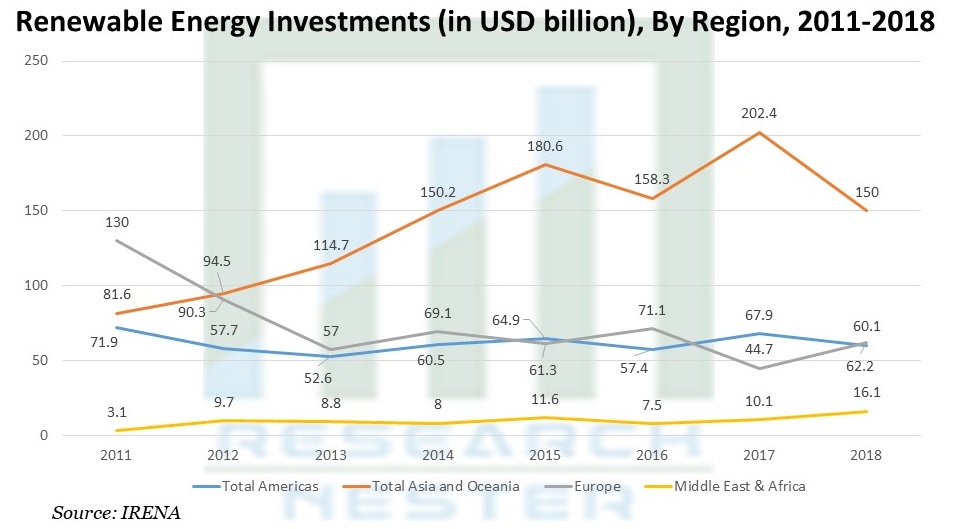 The global DC electric cable market is further classified on the basis of region as follows: