A pacemaker is a small battery powered electrical device implanted in the chest of a patient that is responsible for controlling abnormal heart beats. Most pacemakers contain two components namely pulse generator and pacemaker leads. In addition to these two components, pacemaker treatment can include an external programmer (computer) that communicates with programs or adjusts the settings of the pulse generator.

The global cardiac pacemakers’ market is anticipated to record a CAGR of around 7% over the forecast period i.e. 2019-2027. The market is segmented on the basis of product, technology, application & end users. 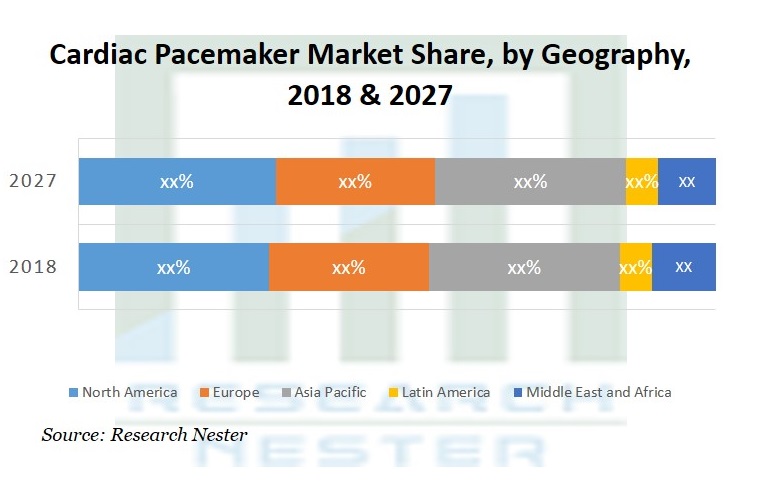 The demographic shift that has been witnessed with the rise of ageing population has resulted in a sudden spurt in cases of people affected by cardiovascular diseases globally. The percentage of people that are entering 60 years and above is rising rapidly and would continue to do so for the next two decades. Cardiovascular diseases shall continue to remain the leading cause of deaths globally which in turn would lead to increase in costs associated with treatment of the CVDs.

World Health Organization has claimed that cardiovascular diseases are the primary causes of death globally, as more people die from CVDs annually than any other cause.

WHO has reported a whopping 17.9 million deaths that have occurred from CVDs in the year 2016.

At least 80% of deaths have occurred due to heart attack and stroke. Changing lifestyles have led to an unprecedented rise in the prevalence of CVDs, which has in turn unleashed a thriving market for drugs and treatment associated with such CVDs. The market for cardiac pacemakers is set to expand in the years to follow with growing cases of CVDs reported annually, which would require usage of drugs and medical treatment thereby opening the doors for investment of funds into research and development in the field . Some reports have even suggested the global cardiac pacemakers market to surpass USD 14 billion by 2025, while continuing to maintain a CAGR of approximately 7.9% during the forecast period.

High Costs And Lack Of Alternatives

The costs of pacemakers which may be ranging anywhere between USD 10,000 to USD 30,000 may curb the growth of the market temporarily. The market may suffer in the long run, if necessary efforts are not stepped up for finding suitable alternatives for rendering medical remedy for patients.

Side Effects Associated With Its Usage

The uses of pacemaker for treatment coupled with its advantages might not be complete and may suffer from some side effects which may have to be addressed quickly in order to render the treatment viable in the immediate future.

With rising number of CVDs, the requirement to provide quality health care to individuals suffering from such CVDs assumes significance. The demand for skilled medical professionals has been on the rise and the inability of the market to meet the requirements of this class of individuals might act as a barrier to the progress of the market.

North America leads the race and has been the largest contributor to the growth (in terms of value) of the cardiac pacemaker market especially the United States of America that continues to hold the largest share globally, covering at least 60% of the market. Robust healthcare infrastructure and rising occurrence of cardiovascular diseases has offered many lucrative opportunities for key players to tap this market segment. However, the European region, specifically western and central Europe have shown a progressive decline in the rate of deaths occurring due to CVDs. The Latin American region is expected to show moderate growth over the forecast period. The Asia Pacific region assumes significance in the light of fastest growing nations in the region such as India, China and Japan that have seen rising levels of disposable incomes and increasing prevalence of cardiovascular diseases in the past decade which have opened up a plethora of opportunities for growth in this segment. Further, supportive government initiatives and funding for this segment has helped ease the burden monetarily for undertaking treatment during the forecast period. Middle East and African region are expected to exhibit noticeable growth during the forecast period. The African Region in particular is expected to witness considerable growth during the forecast period, owing to increased awareness about CVDs and its effects on individuals, an emerging middle income group and increase in government spending for R&D activities.

The global cardiac pacemakers market is further classified on the basis of region as follows: