The growth of the global external pacemaker market is thriving on the back of the rising market penetration of key players along with the consequent entry of products in the market, and factors such as rising disposable income, favorable reimbursement policies, changing patient awareness regarding the early diagnosis of various chronic disorders such as coronary heart diseases, rheumatic heart diseases, congenital heart diseases, strokes and hypertension, and others are anticipated to promote the growth of the global external pacemaker market. Additionally, rising patient preference for products that are easy to set-up and manage over the recommended duration of cardiac pacing other products which improves their quality of life over the course of treatment especially during emergency care with patients suffering from irregular cardiac pacing are also anticipated to promote towards the growth of the global external pacemaker market.

The global external pacemaker market reached USD 899.15 million in the year 2018 and is expected to garner USD 1809.94 million by the end of 2028 by registering a CAGR of 7.22% across the globe over the forecast period 2021-2028. The market is further anticipated to gain an incremental $ opportunity of USD 70.63 million in the year 2020 as compared to the previous year. Further, the market is expected to gain an absolute $ opportunity of USD 698.58 million during the forecast period.

The global external pacemaker market is segmented by regions into North America, Latin America, Europe, Asia Pacific and Middle East and Africa. Among these regions, the market of North America held the largest market share of 38.56% in the year 2019 and is expected to register a CAGR of 7.41% during the forecast period. Moreover, the market in the region is also anticipated to reach a value of USD 708.78 million by the end of 2028. On the other hand, the market in the region is also anticipated to gain an incremental $ opportunity of USD 27.82 million in the year 2020 as compared to the previous year. CLICK TO DOWNLOAD SAMPLE

Apparently, the market in Europe is anticipated to gain a significant market share and further grow by a CAGR of 6.78% during the forecast period on the back of the increasing prevalence of cardiovascular diseases in the region. 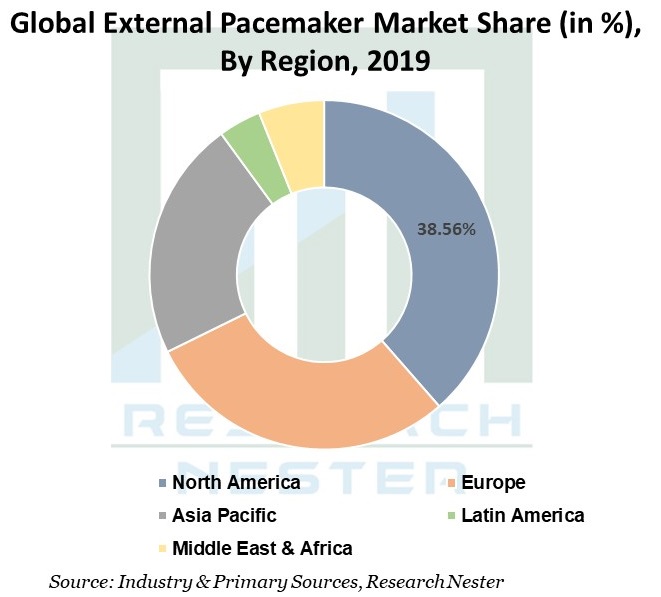 The global external pacemaker market has been segmented on the basis of product into pulse generator device and leads. The pulse generator device held the largest market share in the year 2018 and is expected to cross a value of USD 1517.91 million by the end of 2028. Moreover, the segment is anticipated to gain an incremental $ opportunity of USD 58.77 million in the year 2020 as compared to the previous year. Further, the segment is also expected to gain an absolute $ opportunity of USD 576.73 million during the forecast period. Pulse generators are used in conjunction with lead wire which are used to supply power to the electronic unit. The function of the pulse generator is to provide current supply to the connecting leads for artificial pumping of heart. The power source of the pulse generator are lithium ion batteries which works for 7-9 days and must be replaced for every new patient. With the help of pulse generator different modes of pacing can be done with single, double and triple chamber pacemakers. The pulse generator is also used in pacing and sensing for the desired heart rate.

Globally, cardiovascular diseases are the leading cause of death. According to World Heart Federation, over 18 million people suffered from cardiovascular disease across the world in the year 2019. Almost 4 out of 5 CVD death occurred due to strokes and heart attack, and 1 out of 3 deaths occur prematurely in people under the age of 70. Unhealthy diet, physical inactivity, alcohol & tobacco consumption, high blood cholesterol, and diabetes are most common cause of cardiovascular disease. According to World Health Organization, Asia Pacific accounted for the highest number of deaths per 100,000 in the year 2019 with China being the country with most CVD deaths. Also, it was noted that higher incidence of heart attacks was reported from men in comparison to women. According to the Centers for Disease Control and prevention, an estimated 6 in 10 adults in the United States suffer from chronic diseases. Moreover, prevalence of self-reported inactivity among adults decreased from 40.1% to 26.9% and obesity has nearly tripled since 1975. Sedentary lifestyle, eating habits and various eternal factors have contributed to the declining health and with an evident rise in CVDs across the world, resulting in a rise in demand for efficient medical devices, such as external pacemakers, to minimize the progression of the disorder. 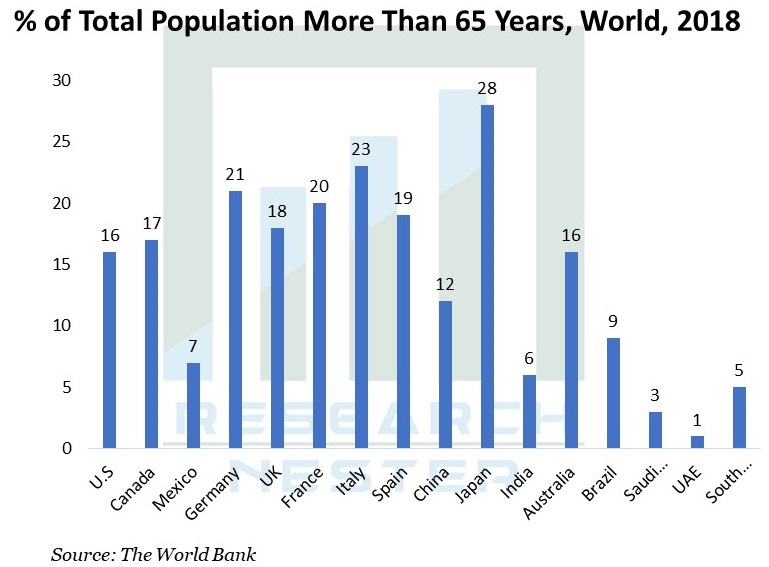 Various manufacturers rely on outside suppliers to provide many of the component parts. The production of an external pacemaker is not a linear process but an integrated one. Component parts such as the battery, leads, and the circuitry are constructed individually, then pieced together to form the final product. Moreover, the cost of microprocessors is also high due to the complexity involved in manufacturing of small motherboards. The high cost of the product and the unfavorable reimbursement policies are therefore anticipated to act as a barrier towards the growth of the global external pacemaker market.

What are the major factors driving the growth of the External Pacemaker market?

Increasing cases of cardiovascular diseases globally is one of the major factors that is driving the growth of the market.

What would be the CAGR of External Pacemaker Market over the forecast period?

Which region is currently holding dominating share in the External Pacemaker market?

Which region will provide more business opportunities for growth of External Pacemaker market in future?

Who are the major players dominating in the External Pacemaker market?