The growth of the global and Southeast Asia recruitment process outsourcing (RPO) market is thriving on the back of the increasing opportunities generated by the integration of artificial intelligence with recruitment process outsourcing, followed by the shift from the traditional recruitment process of face to face interviews to digitalized practice with the use of algorithms and analytics to identify the candidate before contacting with them, and the increasing number of small and medium sized business in southeast Asian countries are some of the factors that has created market opportunity for the RPO service providers.

The global and Southeast Asia recruitment process outsourcing (RPO) market is segmented by regions into North America, Latin America, Europe, Southeast Asia, Asia Pacific except SEA and Middle East and Africa. Among these regions, the market of North America registered a market share of 43.79% in the year 2019 and is expected to achieve a CAGR of 20.29% during the forecast period. Moreover, the market in the region is also anticipated to gain an incremental $ opportunity of USD 415.1 million in the year 2020 and further cross a value of USD 13516.3 million by the end of 2028. Additionally, the market in the region is also anticipated to grow by 4.38x and attain an absolute $ opportunity of USD 10433.3 million during the forecast period. CLICK TO DOWNLOAD SAMPLE REPORT 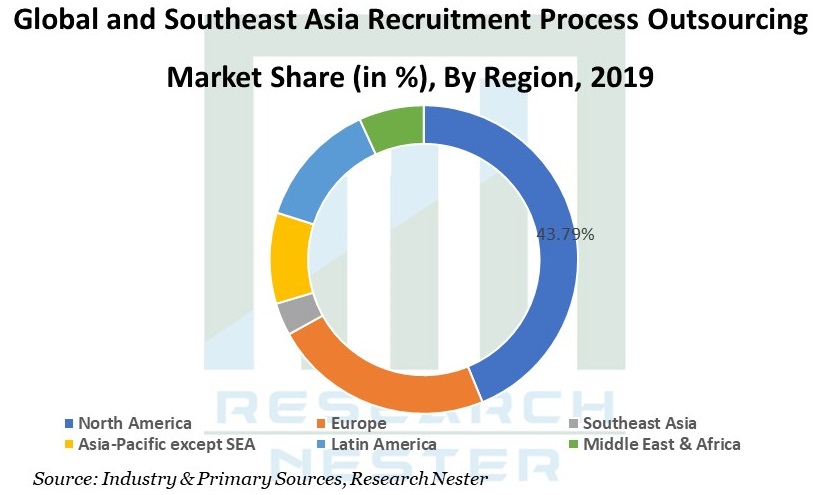 By Type of Outsourcing

The global and Southeast Asia recruitment process outsourcing market has been segmented on the basis of type of outsourcing into on-demand RPO, function-based RPO and full RPO. The full RPO segment registered the largest market share of 67.32% in the year 2019 and is expected to achieve a CAGR of 20.84% during the forecast period. On the other hand, the segment is also anticipated to grow by 4.54x and gain an absolute $ opportunity of USD 16890.9 million during the forecast period. Further, the segment is anticipated to cross a value of USD 21651.8 million by the end of 2028. 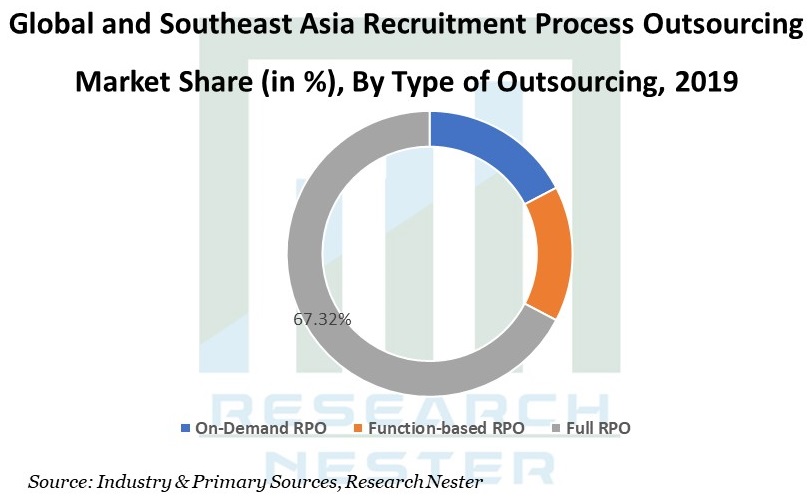 The increasing number of graduates and post-graduates across the globe along with the increasing industrialization is addressing the need for the employment, and hence boosting the demand for RPO solutions. Various countries around the world have diverse pattern of education, on account of which there is a different type of employment requirement as per the countries. Offsite RPO solution is generally preferred by the sectors of the country where there is a smaller number of graduates to meet the requirement. According to IPUMS, in the year 2018, almost 1/4th of millennial, i.e. 24% of the millennial population globally have a graduation certification, and thus they are looking for employment. The RPO service provider can simultaneously be beneficial for both the organization and the candidate to align a appropriate job for the suitable candidate. This may provide a significant boost for the market growth of RPO across the globe. Moreover, the market is anticipated to get a boost with the surge in requirement of quality hires by the organizations. To support the extensive use of recruitment process outsourcing (RPO), keen initiatives have been taken by the key players in the market such as advancement in tools, adoption of cloud-based services and flexibility retaliate faster to changing market. Moreover, modernization of tools coupled with improved diversity and compliance are further contributing to the market growth. Rapid globalization on account of increasing industrialization is also giving significant boost to the requirement rate of recruitment in various industrial verticals. Such factors are anticipated to drive the growth of the global and Southeast Asia recruitment process outsourcing market.

The period of time that the recruitment process takes to hire the right applicant is one of the biggest challenges many recruiters face. The requirement of RPO solution sometimes lack the communication expertise needed for a correct recruitment. The most important aspect during the investigation process is to avoid some of the familiar stereotypes that are extensively used. Such factors are anticipated to hamper the growth of the global and Southeast Asia recruitment process outsourcing market.

1) What are the major factors driving the growth of the Global and Southeast Asia Recruitment Process Outsourcing market?

Ans: Increasing number of graduates and post-graduates across the globe is one of the major factors that is driving the growth of the market.

2) What would be the CAGR of Global and Southeast Asia Recruitment Process Outsourcing market over the forecast period?

4) Which region will provide more business opportunities for growth of Global and Southeast Asia Recruitment Process Outsourcing market in future?

5) Who are the major players dominating the Global and Southeast Asia Recruitment Process Outsourcing market?

7) What are the major segments in the global and Southeast Asia recruitment process outsourcing (RPO) market?

Ans: The market is majorly segmented by type of outsourcing, service, engagement, industry vertical and by region.

8) What can be the significant growth opportunity for the type of outsourcing segment in the global and Southeast Asia recruitment process outsourcing (RPO) market?

Ans: The full RPO segment, which is a sub-segment of the type of outsourcing segment, held the largest market share of 67.32% in the year 2019, is anticipated to show significant growth opportunity.

Ans: Concerns regarding the period of time that the recruitment process takes to hire the right applicant is one of the major factors anticipated to act as a barrier towards the growth of the market.