The global foundry robots market is estimated to garner a sizeable revenue by growing at a CAGR of ~5% over the forecast period, i.e., 2022 – 2031. The growth of the market can be attributed largely to the rapidly growing industrialization in emerging economies, coupled with rising output of manufacturing sector in those nations. According to the Center for International Knowledge on Development, China, the country’s industry added value reached USD 4,742.99 billion in 2018, which is 56.7 times that of 1978. Along with this, increasing demand for foundry robots as they can reduce production cost while offering high efficiency is also expected to drive market growth in the upcoming years. Furthermore, escalating adoption of robots in industries ascribing to their ability to withstand harsh environments and handle heavy work pieces is projected to offer profitable opportunities to the market in the near future. 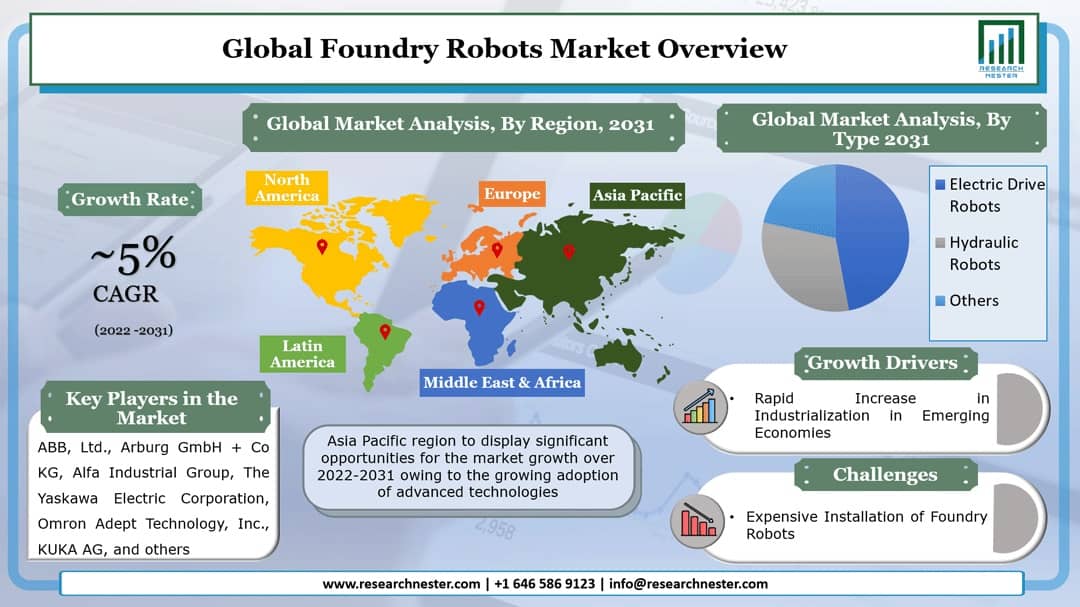 The market is segmented by application into automotive, metal foundry, semiconductor foundry, and others, out of which, the automotive segment is anticipated to hold the largest share in the global foundry robots market. This can be accounted to the increasing usage of foundry robots for performing tasks such as inspecting parts, moving materials, and spraying paint onto the cars. Apart from these, rising adoption of network-controlled robots in the automotive industry to perform repetitive tasks with precision tirelessly is also predicted to boost the market segment growth in the future. Additionally, on the basis of the type, the electric drive robots segment is assessed to acquire the largest share during the forecast period ascribing to the large range of speed, torque and power of these robots, and their ability to operate efficiently in hash environmental conditions. CLICK TO DOWNLOAD SAMPLE REPORT

Regionally, the global foundry robots market is segmented into five major regions including North America, Europe, Asia Pacific, Latin America and Middle East & Africa region. The market in Asia Pacific is estimated to witness noteworthy growth over the forecast period on the back of the rising adoption of advanced technologies in Japan, China and Taiwan. In Japan alone, the software sector accounted for sales of more than USD 100 billion as of 2018, whereas the sales of ICT were estimated at more than USD 420 billion that same year.

In addition, rapidly growing industrialization, and increasing investments in automation are also expected to boost the market growth in the region in the coming years. Moreover, the market in North America is projected to grab the largest share during the forecast period owing to the high adoption of foundry robots in manufacturing units, and strong presence of major market players in the region. 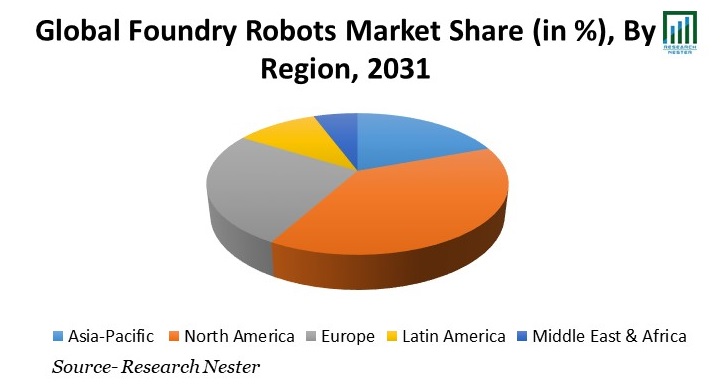 The global foundry robots market is further classified on the basis of region as follows:

Our in-depth analysis of the global foundry robots market includes the following segments:

What are the major factors driving the growth of the foundry robots market?

What would be the CAGR of foundry robots market over the forecast period?

Which region will provide more business opportunities for growth of foundry robots market in future?

Who are the major players dominating the foundry robots market?

What are the segments in the foundry robots market?

Which segment captures the largest market size in the application segment in the foundry robots market?

The automotive segment is anticipated to hold largest market size and is estimated grow at a notable CAGR over the forecast period and display significant growth opportunities.

High installation cost of foundry robots is estimated to hamper the market growth.