The global autonomous delivery robots market is estimated to garner a large amount of revenue by growing at a CAGR of ~49% over the forecast period, i.e., 2022 – 2031. The growth of the market can be attributed to the growing affordability and return on investment on a variety of infrastructure-light robots, and increasing requirement for efficient and flexible automated deliveries in manufacturing units globally. Along with these, continued growth in the e-commerce industry, and rising demand for faster and contactless deliveries among costumers, especially after COVID-19 outbreak, are also expected to drive market growth in the near future. In 2020, more than 2 billion people purchased goods online. Whereas, e-retail sales reached a value of more than USD 3 trillion worldwide. Furthermore, emergence of technologies such as computer vision, artificial intelligence, robotic mechanics and deep learning is also projected to offer ample growth opportunities to the market in the upcoming years. 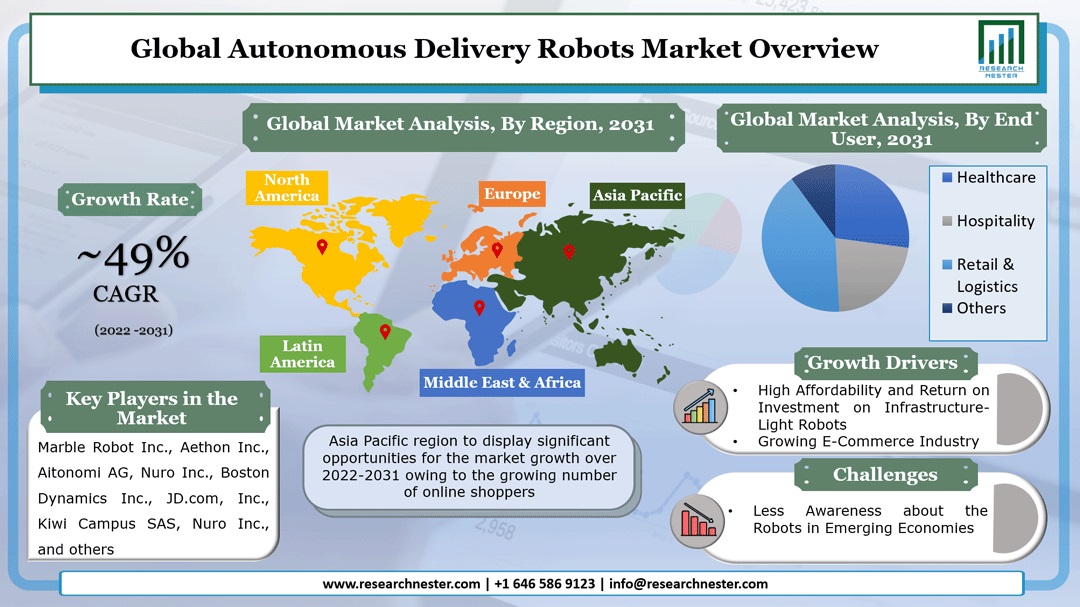 The market is segmented by end user into healthcare, hospitality, retail & logistics, and others, out of which, the retail & logistics segment is anticipated to hold the largest share in the global autonomous delivery robots market. This can be accounted to the rising presence of e-commerce players and omnichannel retailers across the world, which are predicted to raise the demand for delivery robots for last mile delivery. Apart from these, escalating usage of autonomous delivery bots by enterprises to help increase the efficiency of their employees is also assessed to boost the growth of the market segment in the future. Additionally, on the basis of type, the fully autonomous robots segment is evaluated to acquire the largest share during the forecast period owing to the fact that these robots are able to perform delivery operations effectively without the intervention of humans. CLICK TO DOWNLOAD SAMPLE REPORT

Regionally, the global autonomous delivery robots market is segmented into five major regions including North America, Europe, Asia Pacific, Latin America and the Middle East & Africa region. The market in Asia Pacific is estimated to witness noteworthy growth over the forecast period on the back of the increasing number of e-shoppers, and growing number of startups working on the development of autonomous delivery robots in the region. Southeast Asia region was evaluated to add about 60 million online shoppers since the beginning of the coronavirus pandemic. Also, the total number of online shoppers are estimated to reach more than 350 million by the end of 2026.

Moreover, the market in North America is expected to gather then largest share during the forecast period ascribing to the high penetration of delivery robots across several end-user industry verticals, such as hospitality and retail. In addition, rising number of manufacturers and top-end market vendors in the region is also projected to fuel the market growth in North America in the coming years. 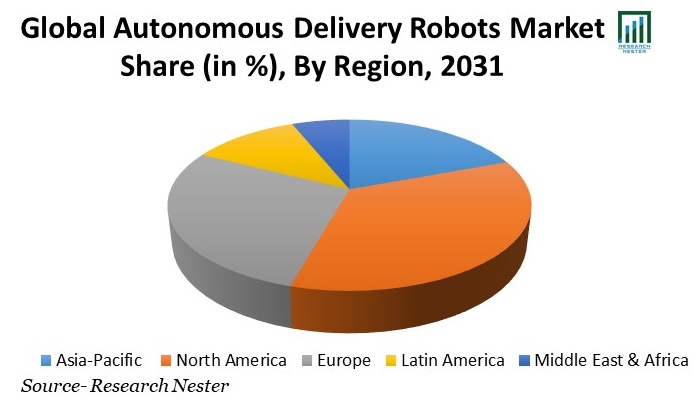 The global autonomous delivery robots market is further classified on the basis of region as follows:

What are the major factors driving the growth of the autonomous delivery robots market?

The major factors driving market growth owing to the growing affordability and return on investment on infrastructure-light robots, and continued growth in the e-commerce industry.

What would be the CAGR of autonomous delivery robots market over the forecast period?

Which region will provide more business opportunities for growth of autonomous delivery robots market in future?

Asia Pacific will provide more business opportunities for market growth owing to the increasing number of e-shoppers, and growing number of startups working on the development of autonomous delivery robots in the region.

Who are the major players dominating the autonomous delivery robots market?

What are the segments in the autonomous delivery robots market?

The market is segmented by type, load carrying capacity, end user, and by region.

Which segment captures the largest market size in the type segment in the autonomous delivery robots market?

The fully autonomous robots segment is anticipated to hold largest market size and is estimated grow at a robust CAGR over the forecast period and display significant growth opportunities.

Low awareness about the robots in emerging economies is estimated to hamper the market growth.