The global floating wind turbine market is estimated to garner notable revenue by growing at a robust CAGR of ~25% over the forecast period, i.e., 2022–2030. The growth of the market can be attributed to the increasing adoption of wind energy, especially in the coastal regions, along with the various advantages of floating wind turbines over fixed ones. Coasts and offshore areas possess great potential for generation of wind energy, however, setting up a foundation in the seabed can be extremely costly. Floating wind turbines deploy anchors or semi-submersible foundations, which are comparatively cost friendly, and provide optimum outcomes. Increasing utilization of the wind energy, and adoption of offshore wind farms are estimated to primarily drive the market growth. According to the International Renewable Energy Agency (IRENA), the total global power generation from wind energy amounted to around 564 GW by 2018. In 2020, 34,367 MW electricity was produced by offshore wind turbines, whereas onshore wind farms produced 698,909 MW electricity. However, offshore segment is growing at a rapid pace, which is estimated to boost the market growth. 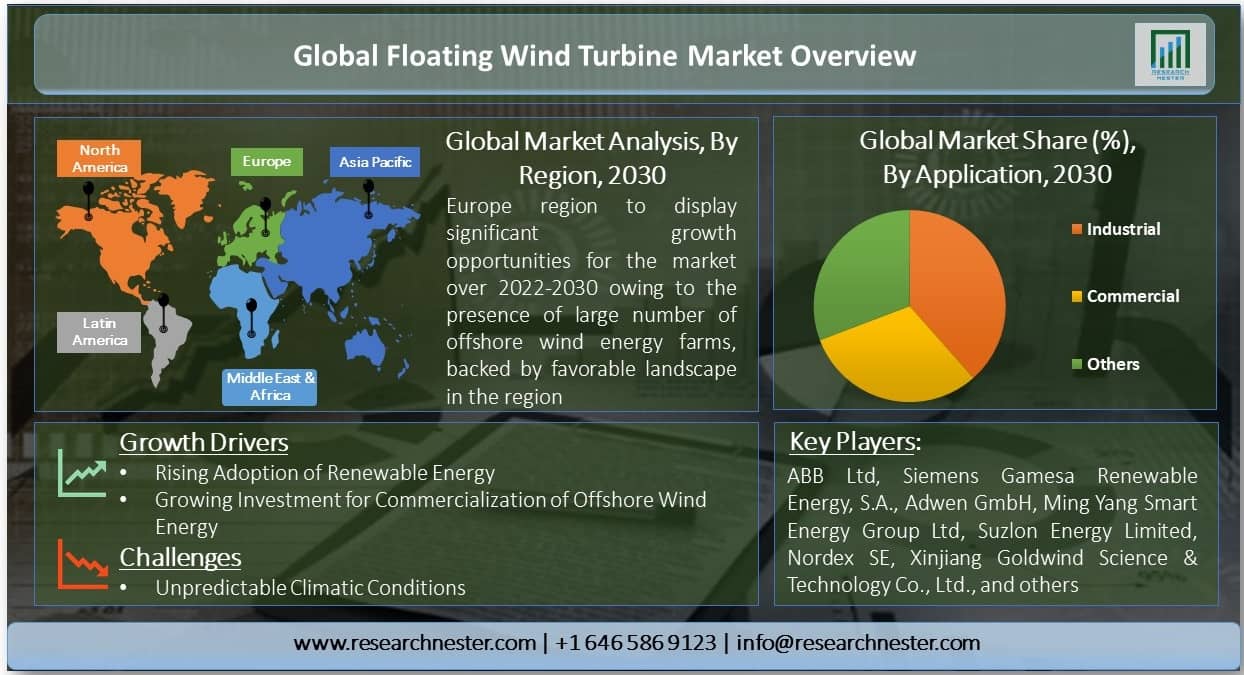 The global floating wind turbine market is segmented by water depth into shallow water, transitional, and deep water, out of which, the transitional segment is anticipated to hold the largest share in the market during the forecast period on account of less capital investment, favorable environmental conditions, easy installation of floating foundations, and least risk. This is majorly popular in coastal and island countries, owing to the presence of large areas with water 40m to 60m deep. CLICK TO DOWNLOAD SAMPLE REPORT

Regionally, the global floating wind turbine market is segmented into five major regions including North America, Europe, Asia Pacific, Latin America and Middle East & Africa region. The market in Europe region currently holds one of the largest shares in the market, which is estimated grow tremendously over the forecast period owing to the presence of large number of offshore wind farms in countries, such as, Denmark, Norway, United Kingdom, and Russia, along with high untapped potential in the region. Denmark was one of the first countries to fully utilize modern wind generation system. Availability of advanced technology in the region, along with high investment in this direction, are anticipated to boost the market growth.

The market in the North America region is also projected to garner notable market share over the forecast period, owing to the increasing number of wind farms in the coastal areas. As per the report by the U.S. Energy Information Administration (EIA), United States produced 338 billion kWh electricity from wind energy in 2020, which accounted for 8.4% of total U.S. utility-scale electricity generation. Although, major part of this electricity was generated by onshore wind farms, offshore wind farms are gaining acceptance owing to their economic benefits. This is estimated to boost the market growth in the region.

The market in the Asia Pacific region is estimated to witness highest CAGR over the forecast period, owing to the increasing adoption of offshore wind farms in China. According to the statistics by the World Wind Energy Association, China alone accounts for 39% of the global wind energy generation capacity, as of 2020. China installed wind turbines of almost 289 gigawatts capacity by 2020. However, other developing countries in the APAC region are yet to adopt offshore wind energy on a notable scale. 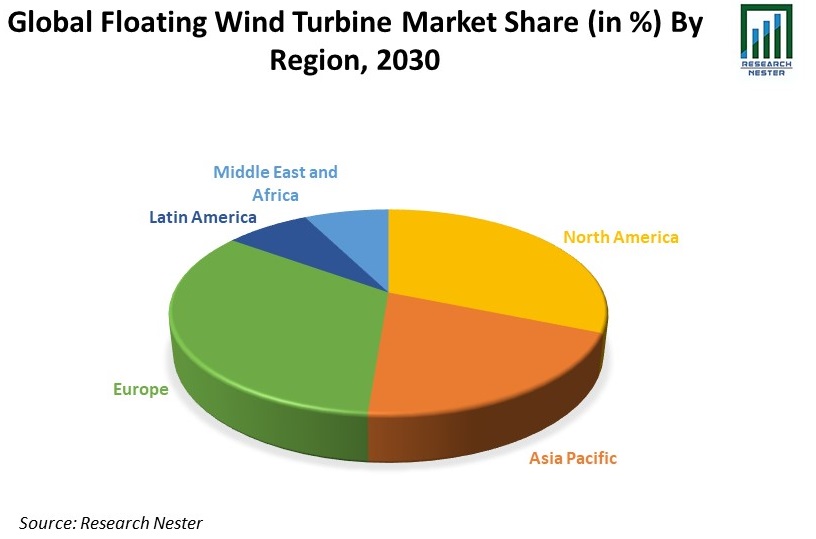 The global floating wind turbine market is further classified on the basis of region as follows:

What are the major factors driving the growth of the floating wind turbine market?

What would be the CAGR of floating wind turbine market over the forecast period?

What are the challenges affecting the floating wind turbine market growth?

Environmental conditions which cannot be controlled are the major challenge that is estimated to hamper the market growth.

Which region will provide more business opportunities for growth of floating wind turbine market in future?

The market in the Europe region will provide ample growth opportunities owing to the increasing number of offshore wind farms and favorable landscape in the region.

Who are the major players dominating the floating wind turbine market?

What are the segments in the floating wind turbine market?

The market is segmented by water depth, application, and by region.

Which segment under the water depth segment captures the largest market size in the floating wind turbine market?

The transitional segment is anticipated to hold the largest market share owing to its reasonable cost, readily available installation vessels, and climatic conditions.