The global green energy market is estimated to grow at ~6.5% CAGR over the forecast period, i.e., 2022 – 2030. The global shift from non-renewable sources of energy, such as, coal and petroleum, to renewable sources of energy, is estimated to drive the market growth. The growth of the market can be attributed to the rising government initiatives to promote the adoption of green energy.  According to the data by the International Energy Agency (IEA), the annual renewable capacity additions increased by 45% in 2020, which accounted for almost 280 GW. Despite the aftereffects of COVID-19 pandemic, installed renewable power capacity experienced a raise of 6% globally. The dangerously high level of greenhouse gases, especially carbon dioxide and methane, the rapid depletion of ozone layer, and rising global temperature are the major cause for concern for the public, as well as the concerned authorities. Adoption of green energy is being promoted to reduce the emission of greenhouse gases, which occurs when coal is burnt in thermal powerplants. Major companies are investing for the development utility scale generation of green energy, which is also estimated to boost the market growth. 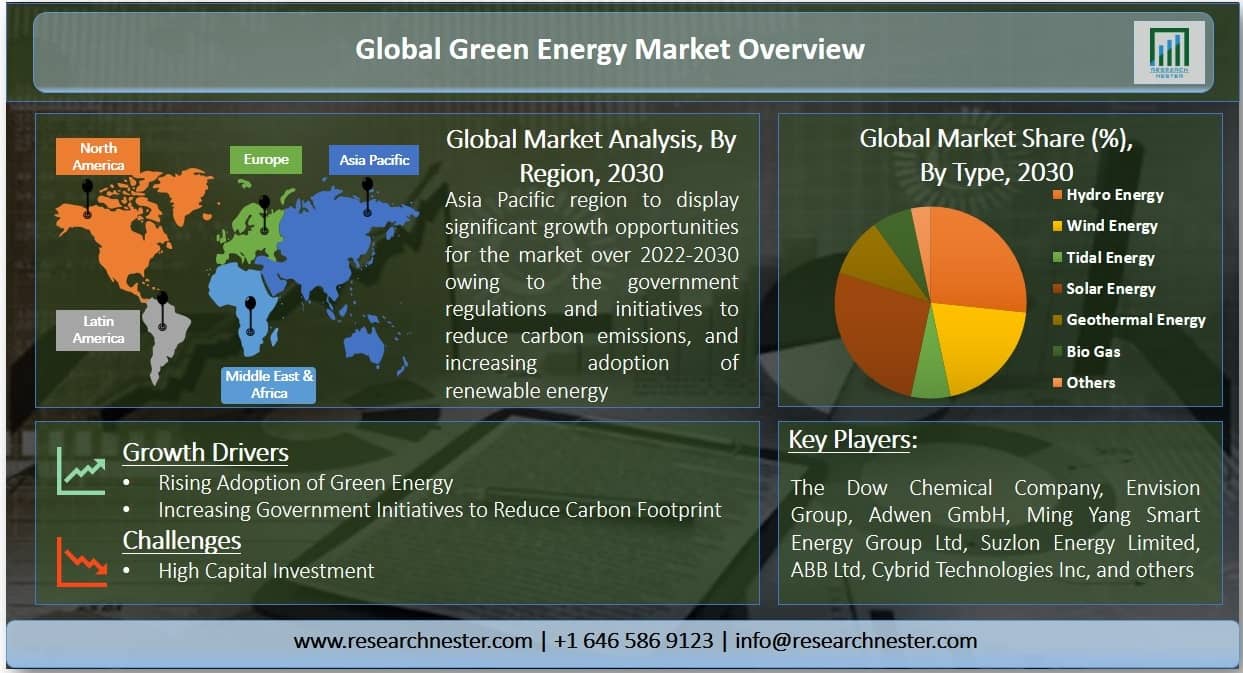 The market is segmented by type into hydro energy, wind energy, tidal energy, solar energy, geothermal energy, bio gas, and others, out of which, the solar energy segment is anticipated to hold a notable share in the global green energy market by the end of 2030 on account of growing installation of solar powerplants, utility scale installation of solar panels, and abundance of sunlight present in majority of the regions across the globe. The wind energy segment is also estimated to gain substantial growth over the forecast period, on account of rising adoption of on-shore and off-shore wind farms. The hydro energy segment is estimated to gain largest share in terms of revenue in the market during the forecast period, backed by rapid construction of hydro powerplants. According to the data by the IEA, Solar energy is estimated to touch 162 GW by 2022, while the wind energy capacity has reached 114 GW in 2021, which is 50% more than the capacity in 2017-19. Moreover, total global hydropower capacity valued at 1308 GW in 2020.

On the basis of geographical analysis, the global green energy market is segmented into five major regions including North America, Europe, Asia Pacific, Latin America and Middle East & Africa region. The market in Asia Pacific region is estimated to witness noteworthy growth over the forecast period on the back of highest utilization and adoption of solar and hydro energy in the region. High adoption of green energy in majorly China, India, and Japan is estimated to significantly boost the market growth. The solar power production in China increased from 39 TWh in 2015 to 260 TWh in 2020, while the total hydropower generated in 2019 crossed 1,302.00 TWh. Similarly, markets in India and Japan have witnessed robust growth in solar and wind energy respectively, which is estimated to boost the regional market growth.

The market in the North America region is estimated to garner a significant market share during the forecast period owing to the increasing number of utility scale solar and hydro powerplants, along with the growing environmental awareness amongst the public. Similarly, the market in Europe is also expected to gain notable market share over the forecast period, as the region has immense potential for the growth of geothermal, wind and hydro energy. 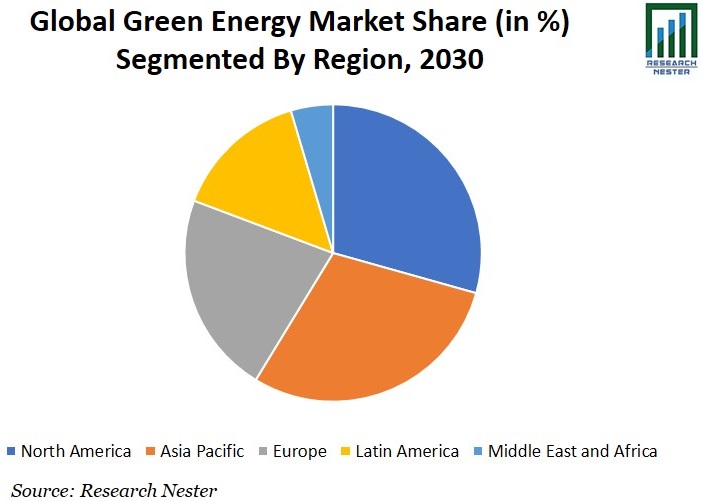 The global green energy market is further classified on the basis of region as follows:

Our in-depth analysis of the global green energy market includes the following segments:

What are the major factors driving the growth of the green energy market?

Increasing government initiatives to promote the adoption of green energy is the major factor driving the market growth.

What would be the CAGR of green energy market over the forecast period?

What are the challenges affecting the green energy market growth?

High investment, and slow implementation are some of the factors estimated to hamper the market growth.

Which region will provide more business opportunities for growth of green energy market in future?

The market in Asia Pacific is estimated to garner the largest market share owing to the large number of commercial utility-scale solar farms and hydro power stations in the region.

Who are the major players dominating the green energy market?

What are the segments in the green energy market?

Which sub-segment captures the largest market size in the application segment in the market?

The commercial segment is anticipated to hold largest market over the forecast period on the back of growing installation of utility-scale powerplants of renewable sources of energy.