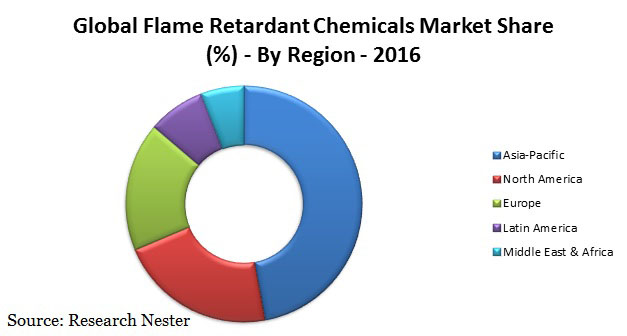 North America is anticipated to witness modest growth during the forecast period. Increasing sale of electrical and electronics devices is expected to positively impact the growth of the flame retardant chemicals market in the region. U.S. is projected to account for the highest market share in the North America owing to the strict implementation of safety regulations.

Stringent government regulations and standards for fire safety is the key growth driver of global flame retardant chemicals market. According to National Fire Protection Association, in 2009, 1,348,500 fires were reported in the United States resulting in 3,010 civilian deaths, 17,050 civilian injuries and USD 12.5 Billion in property damage. The heavy loss incurred from fire outbreak has forced government of various developed and developing countries such as Japan, U.S., Germany and Australia to implement fire safety regulations and lay out of safety standard.