The global ethylene glycol market is estimated to garner a notable revenue by the end of 2033 by growing at a CAGR of ~5% over the forecast period, i.e., 2023 – 2033. Further, the market generated a noteworthy revenue in the year 2022. The primary growth factor of the market is attributed to the expansion of automotive sector. The latest report suggests that the revenue generation by the global automotive industry to reach approximately USD 9 trillion by 2030. 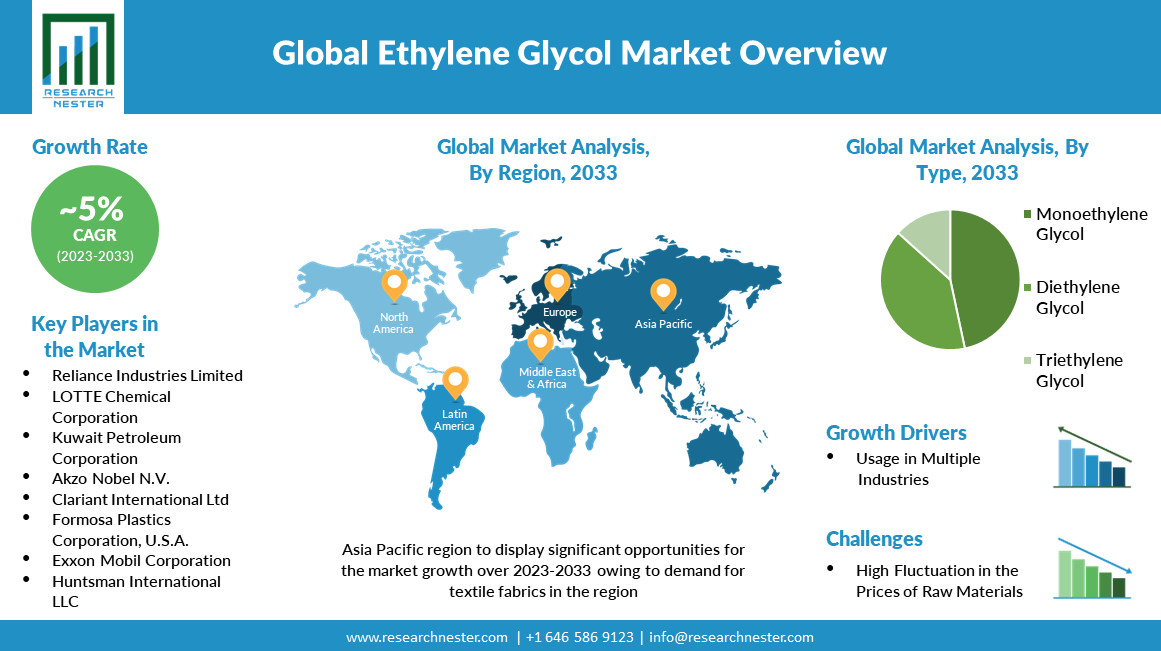 Ethylene glycol is being used to manufacture polyester fibers as a raw material. This raw material works efficiently as a coolant in automobile engines. Further, being a heat transfer agent, it helps in cooling down the parts of a vehicle. Furthermore, mixing ethylene glycol with water has the added benefit of preventing corrosion, acid degradation, and the growth of certain bacteria. Thus, the rise in number of vehicles across the world is anticipated to garner high revenues in ethylene glycol market by 2033. Recent reports estimated that by the end of first quarter of 2022, approximately 1.50 billion vehicles were on roads worldwide. Out of these, around 1 billion were estimated to be passenger cars.

The ethylene glycol market is segmented and analyzed for demand and supply by end-use industry into textile, automotive, packaging, oil & gas, transportation, medical, and others. Out of these, the textile segment is expected to garner the highest garner the highest market shares by 2033, owing to the large production of textile production. According to recent data, the worldwide production volume of textile fibers rose from 100 thousand metric tons in 2017 to 110 thousand metric ton in 2020.

Regionally, the global ethylene glycol market is studied into five major regions including North America, Europe, Asia Pacific, Latin America and Middle East & Africa region. Amongst these, the market in Asia Pacific is projected to hold the largest market share by the end of 2033. The primary reason for the market growth in the region is the rising population along with their increasing demand and manufacturing of textiles. The recent statistics revealed that China was the top-ranked global textile exporter in 2021 with a value of approximately USD 120 billion, which is equivalent 55% of the total textile export sector in Asia. Bangladesh is also a leading textile exporter with a value around USD 40 billion.  Further, the expansion of automotive industry in the region is an another growth factor for the utilization of ethylene glycol. As per recent estimates, India is set to become 3rd largest automotive industry in the world. Also, the India’s automotive industry generated almost USD 220 billion in 2021, which is equivalent to 7% of total India’s GDP. 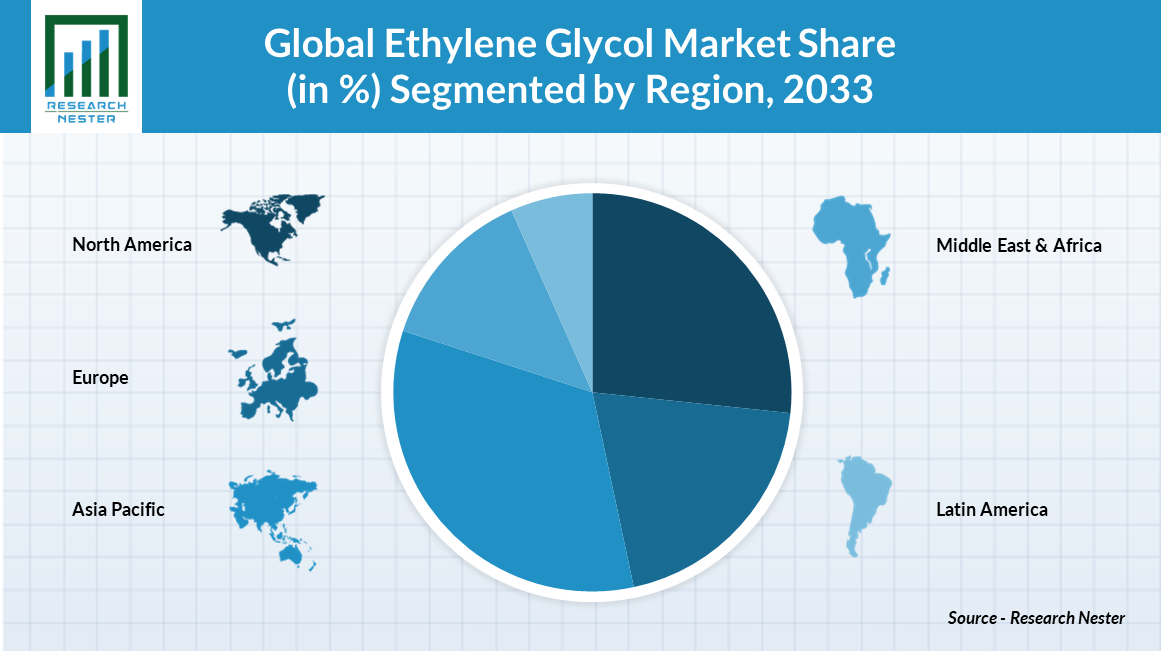 The global ethylene glycol market is further classified on the basis of region as follows:

Our in-depth analysis of the global ethylene glycol market includes the following segments:

What are the major factors driving the growth of the ethylene glycol market?

The expansion of textile and automotive industry along with other end-use industries are expected to propel the market growth in the future.

What would be the CAGR of ethylene glycol market over the forecast period?

What are the challenges affecting the ethylene glycol market growth?

Frequent fluctuation in prices of raw materials along with stringent regulatory policies, and high manufacturing costs are some of the factors that are expected to hamper the market growth.

Which region will provide more business opportunities for growth of ethylene glycol market in future?

Who are the major players dominating the ethylene glycol market?

What are the segments in the ethylene glycol market?

The market is segmented by type, application, end-use industry and by region.

Which segment captures the largest market size in end-use industry in the ethylene glycol market?

The textile segment is anticipated to garner the largest market size by the end of 2033 and display significant growth opportunities.

Frequent fluctuation in prices of raw materials along with stringent regulatory policies, and high manufacturing costs are some of the factors that are expected to hamper the market growth.