·   August 2021- Microsoft announced that it will raise the prices of its Office 365 business subscriptions by the end of 2022. The workspace suite offers various productivity apps such as Excel and Word. The price hikes are expected to boost the company’s total revenue and profit, as the Office line remains the company’s top product in terms of sales.

The global enterprise communication infrastructure market is estimated to gather a sizeable revenue by growing at a CAGR of ~15% over the forecast period, i.e., 2022 – 2030. The growth of the market can be attributed to the considerable increase in the IT budgets of companies, continuous evolution and application of new technologies, and growing penetration of smartphones across the globe. Approximately 5.65 billion people around the world were using smartphones, which increased up to more than 6 billion users by the end of the year 2020. By 2025, about 7.3 billion people are calculated to become smartphone users. Along with these, generation of large volumes of data worldwide, and rising adoption of cloud-based services among small and medium sized organizations are also expected to be crucial factors driving market growth in the upcoming years. Furthermore, deployment of enterprise communication infrastructure offers increased research and development potential, greater computing density and high cost-effectiveness. This in turn is projected to raise the demand for these technologies in the near future. 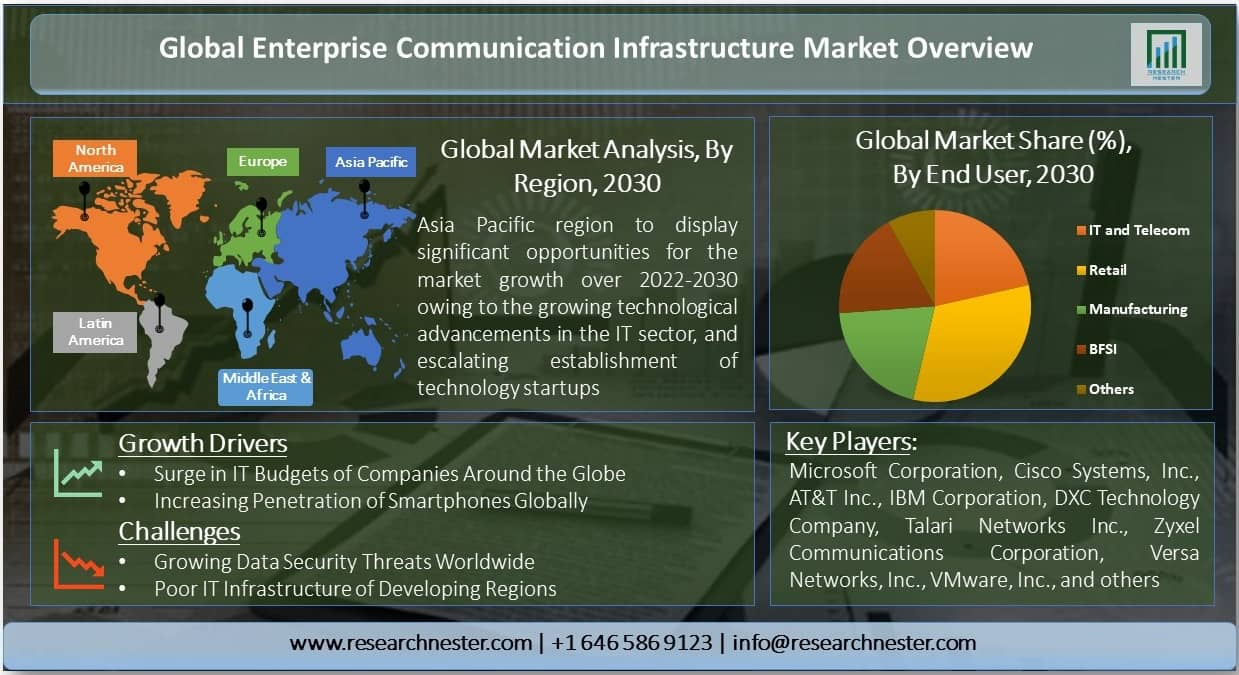 The market is segmented by end user into IT and telecom, retail, manufacturing, BFSI, and others, out of which, the retail segment is anticipated to hold the largest share in the global enterprise communication infrastructure market on account of the increasing multi-channel retail over which customers and employees communicate, and growing usage of enterprise communication infrastructure by multi-channel retailers. Apart from these, the ability of this infrastructure to engage customers across channels such as mobile, web and social media, is also assessed to drive growth to this market segment in the future. Additionally, on the basis of deployment, the cloud segment is predicted to observe the highest growth over the forecast period, which can be credited to the excellent accessibility, low maintenance cost, high data security and unlimited storage capacity of cloud, evaluated to boost the demand for these services in the imminent time.

On the basis of geographical analysis, the global enterprise communication infrastructure market is segmented into five major regions including North America, Europe, Asia Pacific, Latin America and the Middle East & Africa region. The market in the North America is estimated to gather the largest share over the forecast period on the back of the early adoption of technologies in the United States, high implementation of cloud, and rising investments in innovating and adding additional services to the offerings by IT companies in the region. For instance, as of now, more than 50 percent of the government organizations in the United States are using the cloud. The public spending on cloud in the country is also evaluated to rise by more than 17 percent by the end of 2021. In addition, strong presence of major market players is also predicted to drive market growthy in the coming years. Moreover, the market in Asia Pacific is predicted to witness noteworthy growth during the forecast period owing to the rapid technological advancements in the IT sector, growing establishment of technological startups, and robust rate of industrialization in the region.

The global enterprise communication infrastructure market is further classified on the basis of region as follows:

What are the major factors driving the growth of the enterprise communication infrastructure market?

The major factors driving market growth are increase in the IT budgets of companies and growing penetration of smartphones across the globe.

What would be the CAGR of enterprise communication infrastructure market over the forecast period?

What are the challenges affecting the enterprise communication infrastructure market growth?

Rising data security concerns worldwide and poor IT infrastructure in developing regions are estimated to hamper the market growth.

Which region will provide more business opportunities for growth of enterprise communication infrastructure market in future?

Asia Pacific will provide more business opportunities to the market over the forecast period owing to the rapid technological advancements in the IT sector and growing establishment of technological startups in the region.

Who are the major players dominating the enterprise communication infrastructure market?

What are the segments in the enterprise communication infrastructure market?

The market is segmented by type, deployment, end user, and by region.

Which segment captures the largest market size in the end user segment in the enterprise communication infrastructure market?

The retail segment is anticipated to hold largest market size and is estimated to grow at a notable CAGR over the forecast period and display significant growth opportunities.