The global energy storing bricks market is estimated to grow at a robust CAGR over the forecast period, i.e., 2022 – 2030. Regular red bricks used for construction can be modified into energy storing bricks, connected to a power source, majorly solar panels. The red material, i.e., iron oxide present in bricks can act as electrical conductors, and the porous nature of bricks is excellent to store the charge. The growth of the market can be attributed to the growing advancement in energy and power sector, growing adoption of renewable energy, and increasing environmental awareness amongst the masses. Bricks are capable of absorbing heat, and on a similar principle, these bricks can be connected to solar panels, to store renewable energy produced by the panel. According to the researchers at the Washington University in St. Louis, 50 capacitor bricks can be charged in almost 13 minutes, which will be enough to power the emergency lighting of a building for at least 50 minutes. The various benefits offered by this technology are estimated to boost the market growth. Moreover, it does not require any special kind of bricks or other set-up, and the battery can be made during the construction of the house itself. It saves any additional cost and labor, which is estimated to further boost the market growth. 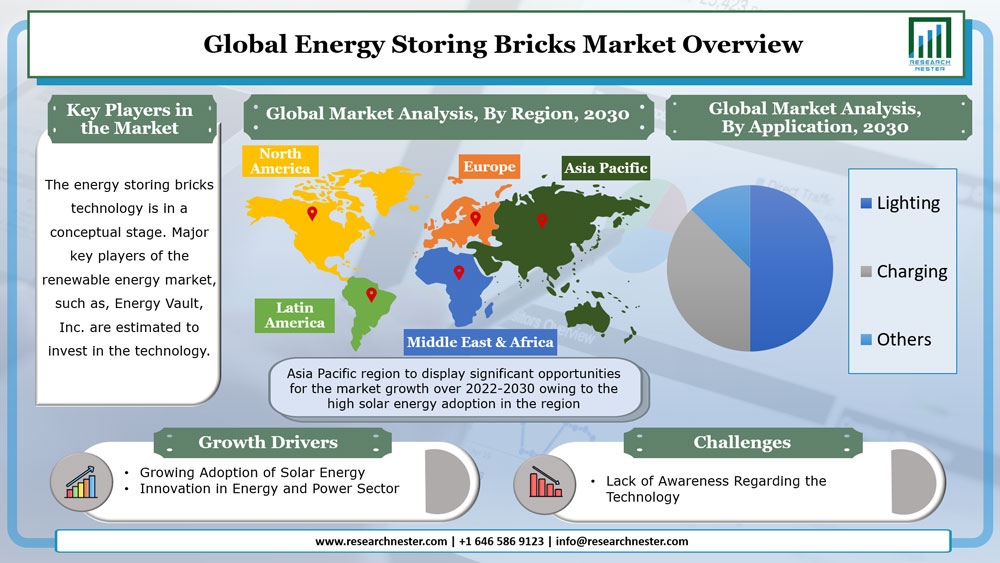 The market is segmented by application into lighting, charging, and others, out of which, the lighting segment is anticipated to hold the largest share in the global energy storing bricks market over the forecast period as this technology is already present, and can be feasibly utilized to light emergency lights. However, scientists expect that bricks will be able to store enough energy to charge electronic appliance, such as, phones, in the near future.

On the basis of geographical analysis, the global energy storing bricks market is segmented into five major regions including North America, Europe, Asia Pacific, Latin America and Middle East & Africa region. The market in Asia Pacific region is estimated to witness noteworthy growth over the forecast period on the back of growing technological development in the countries, such as, Singapore, Japan, South Korea, and China. Moreover, higher adoption of solar energy in this region is estimated to boost the market growth. The market in the North America region is anticipated to gain the largest market share throughout the forecast period owing to the higher adoption of novel technology in the region, growing public awareness regarding the use of renewable energy, and high investment in research activities.

The global energy storing bricks market is further classified on the basis of region as follows:

The energy storing bricks technology is still in a conceptual stage, and the practical implementation is awaited. Major key players of the renewable energy market, such as, Energy Vault, Inc. are estimated to invest in this technology and boost its functional adoption in the upcoming years.

1) What are the major factors driving the growth of the energy storing bricks market?

Ans: The growing adoption of solar energy, and ability of red bricks to conduct electricity, are estimated to boost the market growth.

2) What would be the CAGR of energy storing bricks market over the forecast period?

3) What are the challenges affecting the energy storing bricks market growth?

Ans: Lack of awareness amongst people is estimated to hamper the market growth.

4) Which region will provide more business opportunities for growth of energy storing bricks market in future?

Ans: The market in the Asia Pacific region will provide more business opportunities owing to the high solar energy adoption in the region.

5) Who are the major players dominating the energy storing bricks market?

Ans: The energy storing bricks technology is still in a conceptual stage, and the practical implementation is awaited. Major energy & power market players, such as, Energy Vault Inc. are estimated to invest in this technology.

7) What are the segments in the energy storing bricks market?

Ans: The market is segmented by energy source, application, and by region.

8) Which segment captures the largest market size in application segment in the energy storing bricks market?

Ans: The lighting segment is anticipated to hold largest market size over the forecast period and display significant growth opportunities.