Electronic underwear or smart e-pants is defined as an electronic garment which helps to prevent bedsores. Smart e-pants help to reduce the risk of   pressure ulcers in the sacrum (base of spine). This technology improves the care of individuals confined to beds or wheelchairs. Electronic underwear uses electrical stimulations to produce brief contractions in muscles that are compressed for prolonged period of time. These electrical stimulations are repeated every few minutes which in turn helps the patients to prevent bedsores. 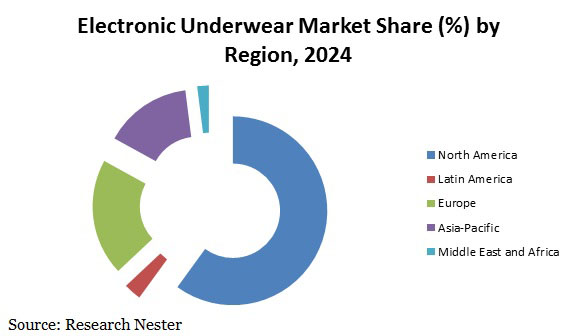 Global electronic underwear/smart e-pants market is further classified on the basis of region as follows:

Factors such as rising adoption of wearable electronics and growing demand for smart e-pants from healthcare sector for the prevention of bedsores or pressure ulcer are believed to be the dynamic factor behind the rapid growth of electronic underwear/smart e-pants market across the globe. Further, rising old age population and increased number of patients affected with pressure ulcer disease are envisioned to bolster the growth of electronic underwear/smart e-pants market by the end of 2024.

Moreover, positive growth in IT industry across the globe which in turn further increase their research & development activities to develop advanced and latest technology products and swelled disposable income of the population across the globe supported by the positive GDP figures in growing nations supporting the penetration of smart consumer electronics which are projected to boost the demand for electronic underwear/smart e-pants.

Key potential companies that may enter into manufacturing of electronic underwear/smart e-pants are mentioned below: