The global electronic grade hydrogen peroxide market is estimated to garner a hefty amount of revenue and grow at a CAGR of ~4% over the forecast period, i.e., 2022 – 2030. The growth of the market can be attributed to the increased complexity in semiconductor chips, which in turn is expected to raise the demand for premium quality electronic grade hydrogen peroxide for effective cleaning of fine geometries and tools. Along with this, increasing usage of the chemical in etching of printed circuit boards in conjunction with sulphuric acid is also projected to propel market growth in the forthcoming years. Furthermore, trend of artificial intelligence, IoT and proliferation of connected devices is evaluated to impel the demand for sensors and microcontrollers, offering lucrative opportunities to the market in the near future. The total number of connected IoT devices in the world are evaluated to grow by 9 percent by the end of 2021 to more than 12 billion active endpoints. There will be an estimated 25 billion connected devices by the year 2025. 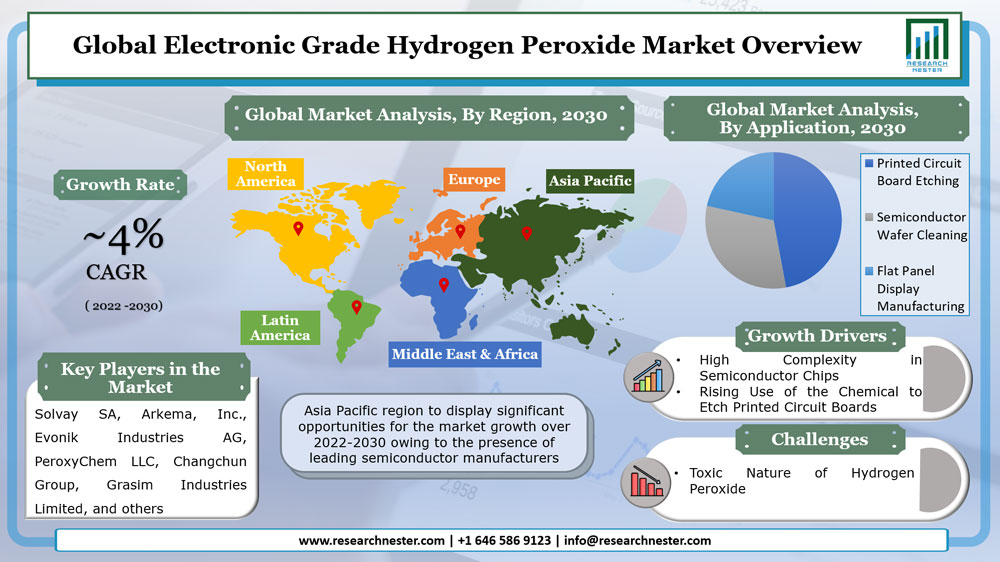 The market is segmented by application into printed circuit board etching, semiconductor wafer cleaning, and flat panel display manufacturing, out of which, the printed circuit board etching segment is anticipated to hold the largest share in the global electronic grade hydrogen peroxide market. This can be accounted to the high utilization of hydrogen peroxide in wet etching of circuit boards for good surface uniformity, excellent adaptability, and its ability to minimize the effects of damage caused to the electronic equipment. Additionally, on the basis of primary function, the etchant segment is assessed to acquire the largest share during the forecast period, which can be credited to the increasing use of the product for etching owing to its high effectiveness to chemically remove layers from the surface of a wafer during manufacturing.

On the basis of geographical analysis, the global electronic grade hydrogen peroxide market is segmented into five major regions including North America, Europe, Asia Pacific, Latin America and the Middle East & Africa region. The market in Asia Pacific is estimated to grab the largest share and witness noteworthy growth over the forecast period on the back of the strong presence of leading semiconductor and PCB manufacturers in Japan, China and South Korea. In August 2021, about 3.5 billion semiconductors were sold in Japan, up from 3 billion products in the same month in the previous year, i.e., 2020. In addition, high manufacturing output of chemicals industry is also projected to drive market growth in the region in the coming years. Moreover, the market in North America is also predicted to gather significant share during the forecast period ascribing to the upsurge in fab capacity, and increasing investments in the electronics industry in the region. 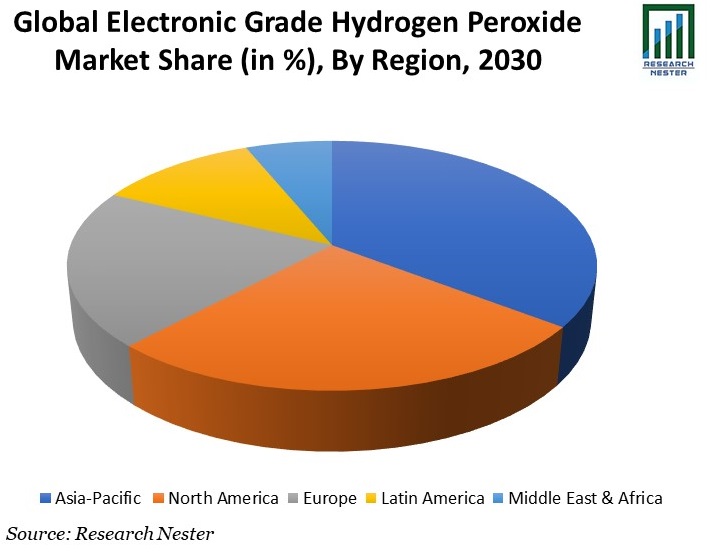 The global electronic grade hydrogen peroxide market is further classified on the basis of region as follows:

What are the major factors driving the growth of the electronic grade hydrogen peroxide market?

The major factors driving market growth are increased complexity in semiconductor chips, and rising usage of the chemical in etching of printed circuit boards.

What would be the CAGR of electronic grade hydrogen peroxide market over the forecast period?

What are the challenges affecting the electronic grade hydrogen peroxide market growth?

Toxic nature of hydrogen peroxide is estimated to hamper the market growth.

Who are the major players dominating the electronic grade hydrogen peroxide market?

The major players in the market are Solvay SA, Arkema, Inc., Evonik Industries AG, PeroxyChem LLC, Changchun Group, and others.

What are the segments in the electronic grade hydrogen peroxide market?

The market is segmented by primary function, concentration, application, and by region.

Which segment captures the largest market size in the primary function segment in the electronic grade hydrogen peroxide market?

The etchant segment is anticipated to hold largest market size and is estimated to grow at a notable CAGR over the forecast period and display significant growth opportunities.