Regenerative braking system is used to increase the efficiency of cutting and setting the power backup on traction line, while efficiency is increased to 90% that gives benefit to the electric locomotives. Ac motor inverter system are used in newly electric locomotives that helps to provide regenerative braking system. Traction motors are required to have two main qualities, one is high initial torque to ignite up against the heavy loads and other is variation in speed depending upon the condition of torque. Electric traction is used to alter the torque from high to low and vice versa.

Global Electric Traction Motor market is expected to hold a positive share of market around USD 33 billion in 2027 at a CAGR of 18.10% from USD 6 billion in 2018 in the forecast period i.e. 2018-2027. On the basis of regional platform, global Electric Traction System market is segmented into five major regions including North America, Europe, Asia Pacific, Latin America and Middle East & Africa region. 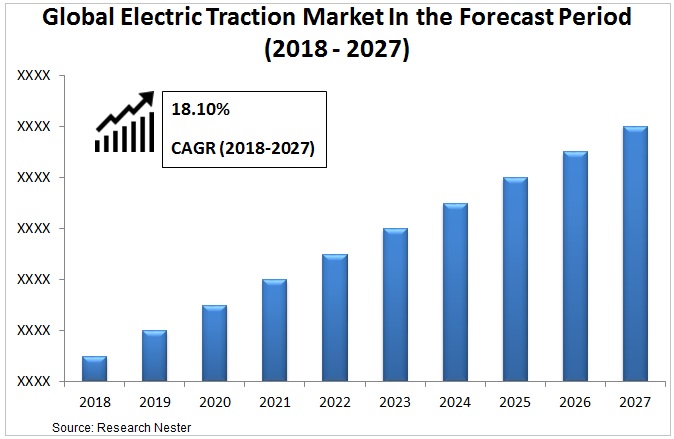 Global Electric Traction Motor market is further classified on the basis of region as follows: 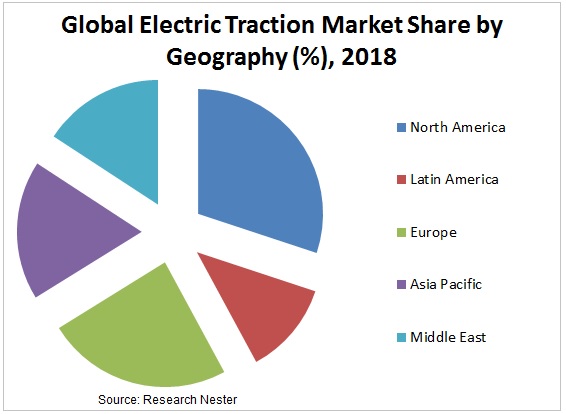 According to “International Energy Agency” Over 1 million electric cars were sold in 2017 with more than half of global sales in China. The total number of electric cars on the road surpassed 3 million worldwide, an expansion of over 50% from 2016.

Use of regenerative braking by electric traction, in which traction motors generates brake and converts into generators that helps to provide motion to the train by producing enough electric power and transfer back to the electric traction lines. Additionally, increasing railway network of countries such as US, China and India is expected to drive the growth of Electric Traction Motor market in the forecast period.

Rising use and manufacturing of electric vehicle

Innovation and advancement in R&D solutions

Innovations in technological barriers of motors and advancement in R&D solution for improved braking and transforming system is expected to drive the growth of global electric traction motor market.

One of the challenging factor for this industry is perception of people across the world about the safety and charging/discharging rate of the energy storage battery. Additionally, the cost of tesla motors electric vehicles which is expected to be more than USD 100 for per KWh till 2020 will restrain the growth of market in the forecast period i.e. 2018-2027.