A drug eluting stent stops the blockage to reoccur. There is a requirement of intense treatment with blood thinners to prevent the stents from closing. These stents usually refer to metal stents that have coating of pharmacological drugs which includes everolimus, paclitaxel and also the drugs which widens the narrowed blood vessel. The major role of drug eluting stent is that it broadens the constricted blood vessels and also prolongs the life of the patient.

The market is observing vibrant growth on account of increasing number of cardiovascular diseases (especially coronary heart disease), rising aging population, growing prevalence of obesity and diabetes. Rising adoption of minimally invasive endovascular surgeries and appropriate reimbursement policies along with increasing investment in the healthcare sector are some of the factors which are supporting the growth of the market. The drug eluting stents market is anticipated to record a CAGR of 5.6% over the forecast period i.e. 2019-2027. The market is segmented by application into peripheral artery disease and coronary artery disease, out of which, the coronary artery disease is expected to have the largest market share in the overall market owing to high prevalence of coronary heart diseases across the globe. 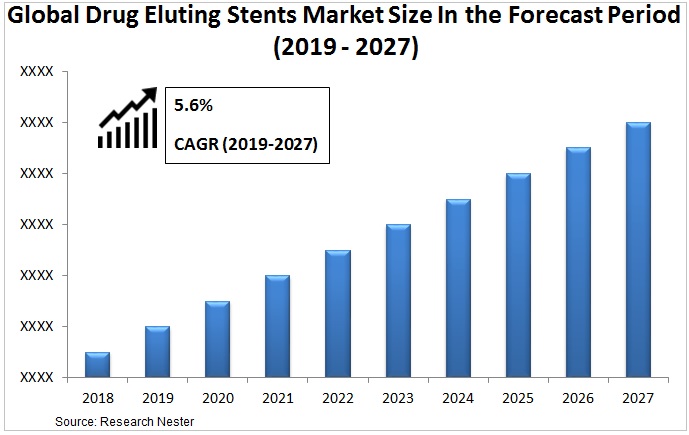 The cardiovascular diseases are increasing worldwide and are one of the leading cause of death. Coronary heart diseases are increasing every year on account of artery blockage. According to World Health Organization (WHO), approximately 17.9 million people have died because of CVD’s in the year 2016, representing 31 percent of the total worldwide deaths. Out of these deaths, 85 percent are because of stroke and heart attacks. Rising cholesterol levels increase the chance of plaque formation in the arteries. The blockage of the arteries in the heart are removed by performing angioplasty in which drug eluting stents are widely used. This decreases the chance of reoccurrence of artery blockage in the future. The increasing prevalence of cardiovascular diseases is anticipated to augment the growth the market over the forecast period.

Coronary heart diseases are directly associated with the age. Most of the coronary heart diseases takes place in individuals who are aged between 35 and 84. Coronary heart diseases often results in cardiac arrests. According to the report by National Institute of Health (NIH), the older population across the globe is expected to grow drastically. Worldwide, 8.5% of the population across the globe (617 million) are aged 65 and above. According to the latest report, this percentage is expected to increase to approximately 17% of total world population by the year 2050 (1.6 billion). This rise in the geriatric population is anticipated to support the growth of the global drug eluting stents market over the forecast period.

With the growing incident rate of cardiac health problems, there is an increasing demand for healthcare professionals, especially the cardiologists. For instance, in India, there are 4,000 cardiologists, but the actual requirement is 88,000. This lack of cardiologists is expected to restrain the growth of the market over the forecast period.

The Asia Pacific market of drugs eluting stents is expected to witness a significant growth on the back of rising pool of patients, rise in the disposable income, increase in patient awareness, enhancement in medical tourism and growing geriatric population. Enhancement in medical tourism, rising pool of patients and increase in disposable income are the prime factors which are anticipated to boost the market shares over the forecast period.

The global drug eluting stents market is further classified on the basis of region as follows: