·   November 11, 2020- Gas Technologies LLC, a company based in Michigan, entered a Memorandum of Understanding with Bio Friend Inc. and H&H Worldwide, Inc. for developing fully integrated Renewable Methanol to Dimethyl ether (DME) and Polyoxymethylene (POM) system within the United States.

The global dimethyl ether (DME) market is estimated to garner a large amount of revenue and grow at a CAGR of ~10% over the forecast period, i.e., 2022 – 2030. The growth of the market can be attributed to the increasing demand for dimethyl ether for LPG blending, abundant availability of raw materials, and growing expansion of the scope of applications of dimethyl ether.  Along with these, dimethyl ether is a compound that has a low boiling point and no sulfur content, which makes it a great alternative of energy fuels. This in turn is expected to be another crucial factor driving the growth in the upcoming years. Furthermore, growing concerns associated with environment conservation, and the rising need to use environment-friendly fuels and products are projected to offer profitable opportunities to the market in the near future. 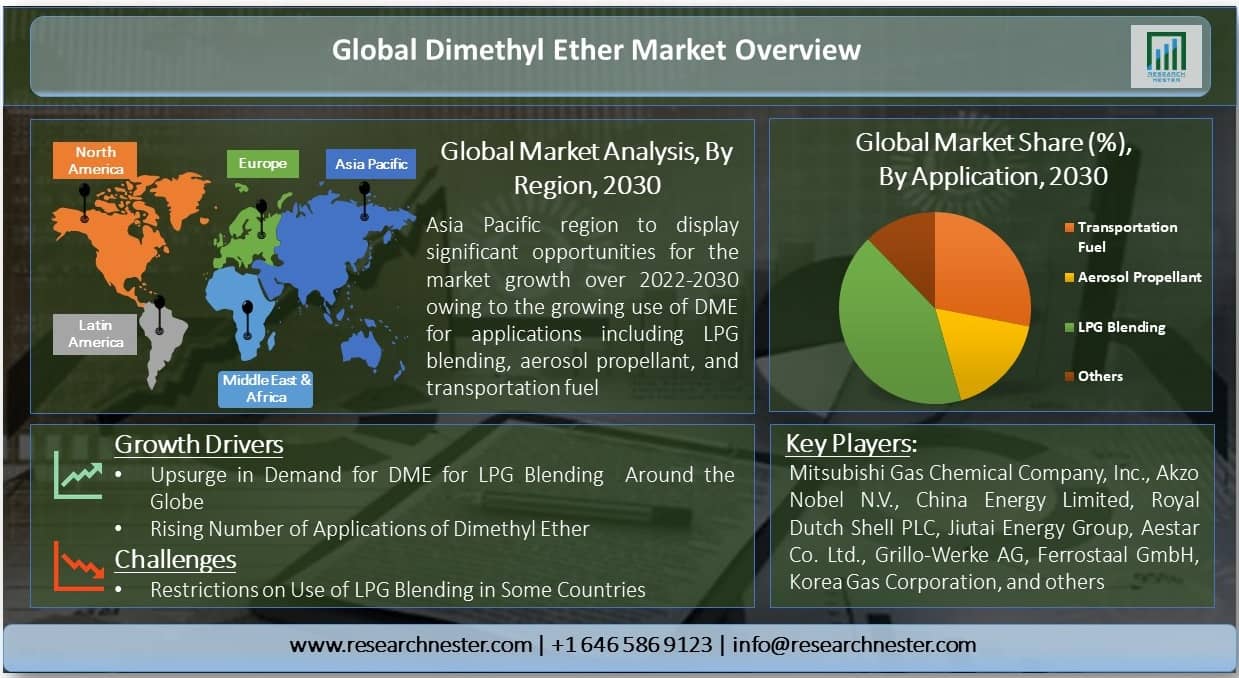 The market is segmented by application into transportation fuel, aerosol propellant, LPG blending, and others, out of which, the LPG blending segment is anticipated to hold the largest share in the global dimethyl ether market. This can be accounted to the rising reliance on LPG imports in several nations around the world, and growing use of dimethyl ether with LPG as an additive fuel to reduce hazardous emissions. For instance, more than 13 million metric tons of LPG was imported into India during the financial year 2019, up from about 11 metric tons in 2018. In addition, the transportation segment is predicted to witness the highest growth over the forecast period owing to the increasing emphasis on the usage of dimethyl ether for transportation as a result of elimination of emission of particulate matter. Moreover, on the basis of source, the segment for natural gas is assessed to grab the largest share over the forecast period, which can be credited to the high usage of natural gas to produce DME for power generation and transportation. CLICK TO DOWNLOAD SAMPLE REPORT

On the basis of geographical analysis, the global dimethyl ether market is segmented into five major regions including North America, Europe, Asia Pacific, Latin America and the Middle East & Africa region. The market in the Asia Pacific is estimated to witness noteworthy growth over the forecast period on the back of the growing usage of DME for various applications such as aerosol propellant, LPG blending and transportation fuel. Apart from these, increasing manufacturing output of China and high availability of raw materials are also evaluated to boost the region’s market growth in the future. As per the data provided by United Nations Statistics Division, China accounted for about 28.7 percent of the global manufacturing output in 2019, which is more than 10 percent of that in the United States, accounting for more than 16 percent of the world’s total manufacturing output. Additionally, the market in North America is anticipated to gather the largest share during the forecast period ascribing to the robust economic growth, high per capita income and rising use of DME to produce propane Autogas for vehicles.

The global dimethyl ether market is further classified on the basis of region as follows:

Our in-depth analysis of the global dimethyl ether market includes the following segments:

What are the major factors driving the growth of the dimethyl ether market?

What would be the CAGR of dimethyl ether market over the forecast period?

What are the challenges affecting the dimethyl ether market growth?

Restrictions on usage of LPG blending in some countries is estimated to hamper the market growth.

Which region will provide more business opportunities for growth of dimethyl ether market in future?

Asia Pacific will provide more business opportunities for market growth owing to the growing usage of DME for various applications such as aerosol propellant, LPG blending and transportation fuel in the region.

Who are the major players dominating the dimethyl ether market?

What are the segments in the dimethyl ether market?

The market is segmented by source, application, and by region.

Which segment captures the largest market size in the application segment in the dimethyl ether market?

The LPG blending segment is anticipated to hold largest market size and is estimated to grow at a notable CAGR over the forecast period and display significant growth opportunities.