The global dermatophytosis treatment market is estimated to garner a large amount of revenue by growing at a robust CAGR over the forecast period, i.e., 2022 – 2030. The growth of the market can be attributed to the growing population of people with weak immune systems, and rising incidences of sedentary lifestyle among people. Along with these, increasing geriatric population contributing to the high occurrence of dermatophytosis across the globe is also expected to significantly raise the demand for the treatment in the forthcoming years. According to the World Health Organization, between 2015 to 2050, the percentage of the world’s population aged 60 years and older will nearly double from 12 percent to 22 percent. In 2050, 80% of older people will be living in low- and middle-income countries.

Upsurge in the number of hospital-acquired diseases is also predicted to expand the market in the near future. Furthermore, escalating private investments for conducting research and development activities to develop novel treatment in developed nations, and rise in healthcare funding are assessed to offer profitable opportunities for market growth in the imminent time. 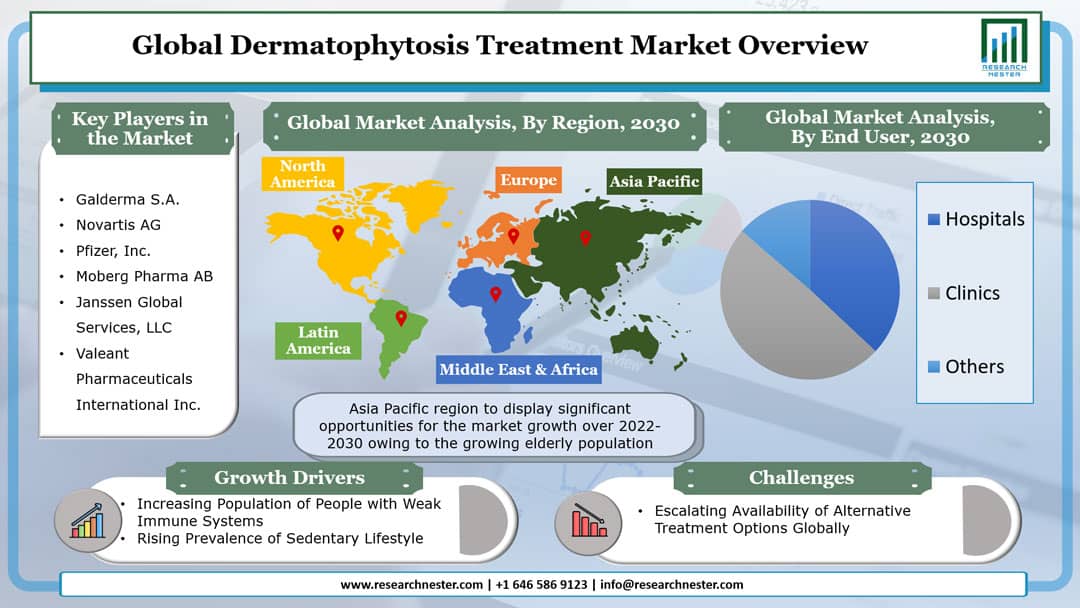 The market is segmented by drug used into imidazole, econazole, clotrimazole, miconazole, ketoconazole, terbinafine, clotrimazole, corticosteroid, terbinafine, itraconazole, griseofulvin, and others, out of which, the itraconazole segment is anticipated to hold the largest share in the global dermatophytosis treatment market. This can be accounted to the broad antifungal spectrum and excellent effectiveness of this drug against fungal infections. Apart from these, high usage of itraconazole capsules for treating infections of the toenails is also projected to drive the segment’s growth in the future. Additionally, on the basis of end user, the clinics segment is evaluated to grab the largest share during the forecast period owing to the growing preference of patients to get treated by medical professionals operating in a specialty clinic facility. CLICK TO DOWNLOAD SAMPLE REPORT

On the basis of geographical analysis, the global dermatophytosis treatment market is segmented into five major regions including North America, Europe, Asia Pacific, Latin America and the Middle East & Africa region. The market in the Asia Pacific is estimated to witness noteworthy growth over the forecast period on the back of the increasing geriatric population, and significant improvements in the healthcare facility in the region. In addition, rise in disposable income and literacy levels is also projected to boost the region’s market growth in the coming years. In the ASEAN region, Singapore accounts for the highest disposable income of approximately USD 30 thousand as of 2021, whereas Malaysia’s disposable income is calculated to reach a value of close to USD 5 thousand. Moreover, the market in North America is anticipated to acquire the largest share during the forecast period ascribing to the availability of highly developed healthcare infrastructure, favorable reimbursement policies, and growing awareness about the benefits of early diagnosis of the disease. 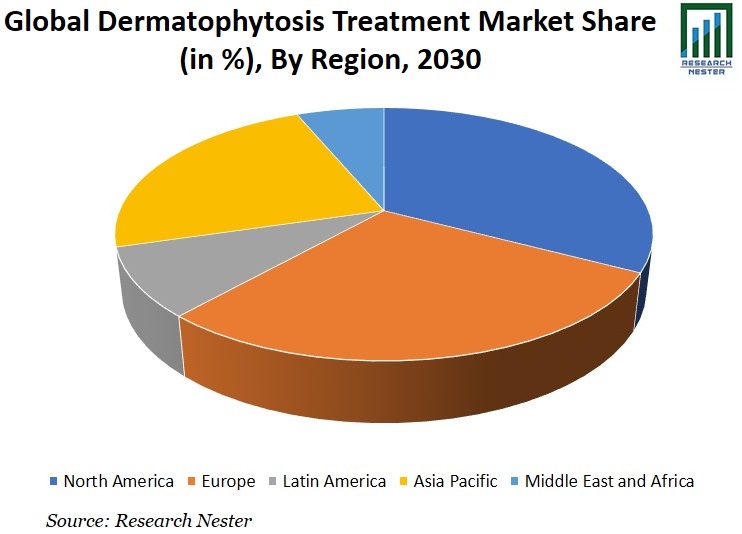 The global dermatophytosis treatment market is further classified on the basis of region as follows:

Our in-depth analysis of the global dermatophytosis treatment market includes the following segments:

What are the major factors driving the growth of the dermatophytosis treatment market?

The major factors driving market growth are growing population of people with weak immune systems and rising incidences of sedentary lifestyle among people.

What would be the CAGR of dermatophytosis treatment market over the forecast period?

What are the challenges affecting the dermatophytosis treatment market growth?

Availability of alternative treatment options is estimated to hamper the market growth.

Which region will provide more business opportunities for growth of dermatophytosis treatment market in future?

Asia Pacific will provide more business opportunities for market growth owing to the increasing geriatric population, and significant improvements in the healthcare facility in the region.

Who are the major players dominating the dermatophytosis treatment market?

What are the segments in the dermatophytosis treatment market?

The market is segmented by type, drug used, end user, and by region.

Which segment captures the largest market size in the end user segment in the dermatophytosis treatment market?

The clinics segment is anticipated to hold largest market size and is estimated to grow at a notable CAGR over the forecast period and display significant growth opportunities.