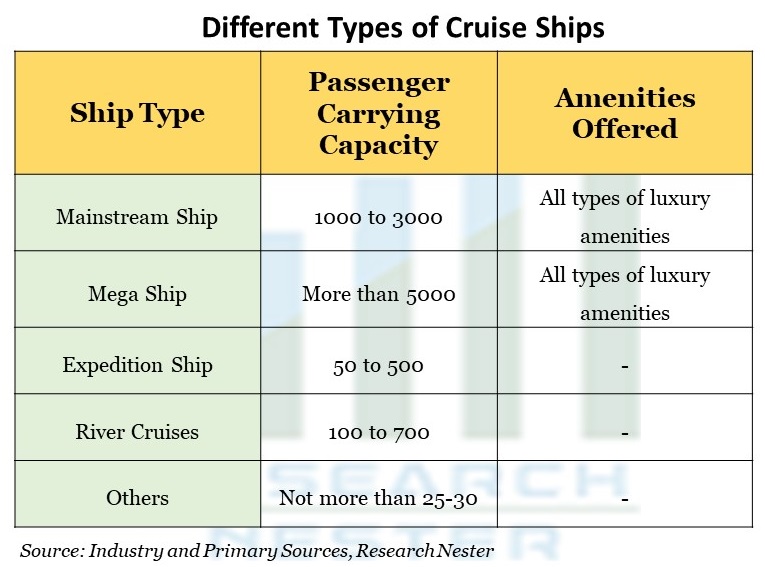 The global cruise ships market is exhibiting substantial growth on account of rising cruise travelers across the globe which is raising the demand amongst cruise lines operators worldwide for ordering considerable number of cruise ships. Additionally, the stable cost of steel in developed regions around the globe is helping to ensure the increase in profitability for the production of cruise ships amongst the manufacturers. Steel is considered as one of the major metals used in the production of cruise ships. Moreover, major proportion of cruise line travelers are represented by millennial and generation Y who are equipped with high purchasing capacity. Such factors are anticipated to drive the growth of the global cruise ships market. The market was valued at USD 12,350 million in the year 2018 and is slated to achieve USD 20,165.5 million by 2027 with a CAGR of 5.66% over the forecast period 2019-2027. CLICK TO DOWNLOAD SAMPLE REPORT

The global cruise ships market is segmented by regions into five major regions including North America, Europe, Asia Pacific, Latin America and Middle East & Africa region. Among these regions, Europe is expected to hold the largest market share of around 32.10% in the year 2027 on account of high concentration of cruise ship buildings in the region. Additionally, high per capita income in the nations, such as, UK, Germany, France, Italy, Netherlands and others, which evince high disposable income, are directed towards the touring activities. Such a factor is anticipated to bolster the cruise ship market in the region during the forecast period.

The global cruise ships market is segmented by type into mainstream, mega cruise, expedition cruise, river cruise and others, out of which, the river cruise segment is anticipated to hold the largest market share of around 38% in the year 2027. Increasing prevalence of river cruises in nations across the globe, along with the developments of new cruise routes, for instance, river Ganga in India, Irrawaddy in Myanmar, Yangtze in China and others, river cruises are increasingly becoming popular for tourists across many tourist places worldwide. The river cruise segment was valued at USD 4789.4 million in the year 2018 and is anticipated to reach USD 7660.0 million by the end of 2027 with a CAGR of 5.42% during the forecast period and growth of 1.60x in between the period. 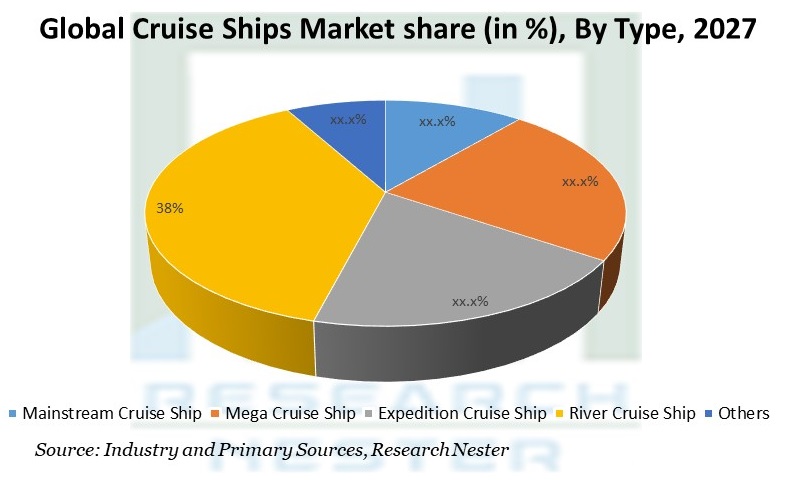 Rising Demand of Voyaging in Generation X and Y

According to the Society for Human Resource Management (SHRM), the millennial or Gen Y generation bracket in India is projected to be 50% of the workforce by 2020. Additionally, according to Pew Research Center, millennials in the U.S. accounted for a population of 71 million in 2016 and is expected to overtake baby boomers in the forthcoming years.

In leading nations across the globe, millennials are the major earning population bracket. Over the years, the prevalence of cruising amongst millennials have significantly increased on the back of rising per capita income and increase in luxury expenditure amongst the age bracket. Prevalence of larger number of millennial populations along with their strengthening purchasing capacity coupled with substantial demand for voyaging among the generation Y and generation Z, on the back of surge in luxury expenditure, all such factors are anticipated to contribute significantly towards the growth of the global cruise ships market. 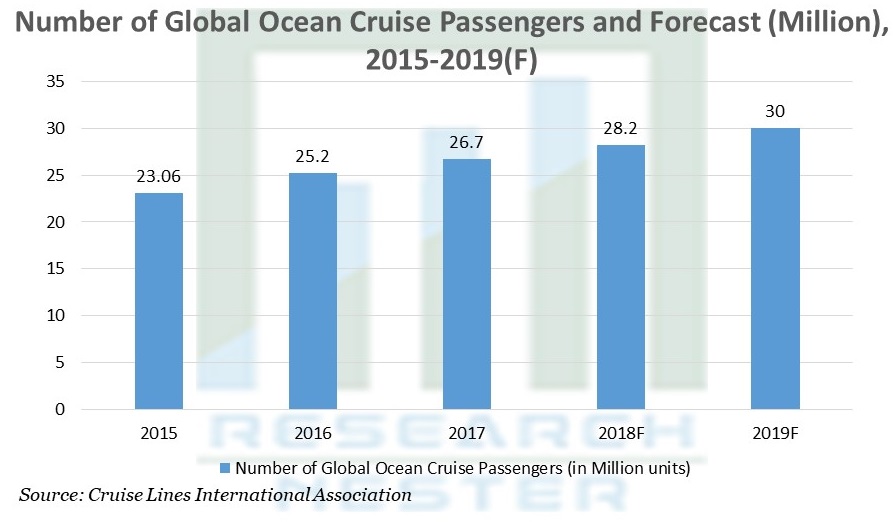 The tourism is one of the emerging sectors across the globe. Various governments of the nations across the world are taking initiatives to uplift the tourism industry. Various market forces, for instance, global competition, new innovative offerings and packages, services and expeditions amongst others are transmuting towards the growth of the tourism industry. Additionally, inclusion of various tourism technologies and the adoption of internet of things, service robots, augmented and virtual reality (AR and VR), artificial intelligence (AI) and others are some of the factors revolutionizing the cruise tourism industry worldwide. For instance, according to another statistics by CLIA, in Asia, the number of cruise ships deployed in Asia grew by more than 53% since 2013 till 2017, multiplying the capacity from 1.51 million passengers in 2013 to 4.24 million passengers in 2017. Such factors are anticipated to drive the growth of the global cruise ships market during the forecast period.

Delay In Delivery And Induction Of Cruise Ships

Furthermore, other key and niche manufacturers are constantly working on technical advancements in the cruise ships technology and the expansion of product portfolio in order to gain competitive edge in the global cruise ships market.