The global concrete fibers market is estimated to experience a CAGR of ~8% over the forecast period, i.e., 2022–2030. The growth of the market can be attributed to the improving standards of construction, especially in developed and developing nations. Concrete fibers are mainly used to fill cracks in concrete, cover up crevices, and other shortcomings in the building during construction, which cannot be achieved be concrete itself. Fixing cracks in roads and bridges is one of the primary applications of concrete fibers. Moreover, advantages of concrete fiber, such as, high stability, physical durability, and heat resistance, as opposed to traditional concrete, are estimated to boost the market growth. Construction industry values over USD 10 trillion, forming a major part of the global economy, which is also expected to fuel the market growth. 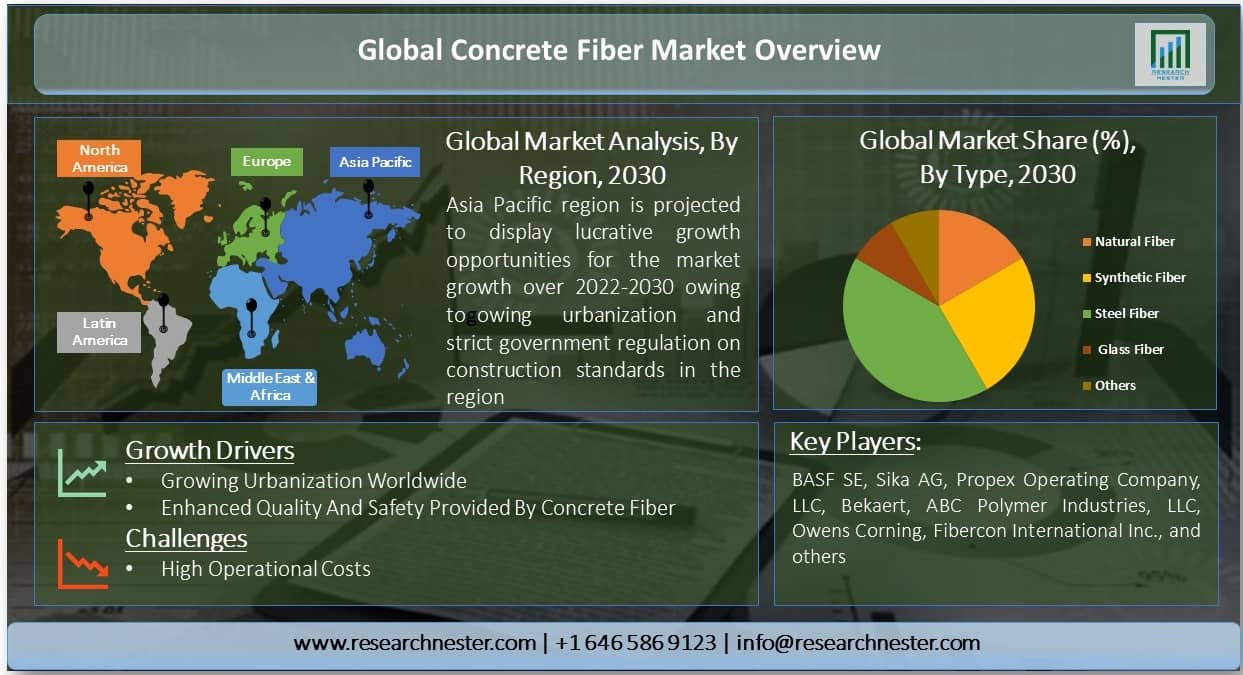 The global concrete fibers market is segmented by type into natural fiber, synthetic fiber, steel fiber, glass fiber and others, out of which, the steel fiber segment is anticipated to hold the notable share in the market during the forecast period on account of its high strength and easy availability in the market. Steel fibers are highly used in construction of transportation infrastructure, as it is tensile and malleable, which provides strength to the road and brides. On the basis of application, the market is segmented into construction, transportation infrastructure, mining, and others, out of which, the transportation infrastructure segment is anticipated to hold the largest market share, owing to the improving construction standards for public places by the government to curb accidents.

Regionally, the global concrete fibers market is segmented into five major regions including North America, Europe, Asia Pacific, Latin America and Middle East & Africa region. The market in North America region is estimated to garner largest share over the forecast period on the back of constantly growing construction industry in the developed countries, such as, Canada, and United States, coupled with rising urban population. As of 2020, the construction industry holds over 4% of the GDP in the U.S., which is one of the largest in the world. Moreover, increasing urbanization, backed by migration to urban areas, is projected to increase the demand for construction activities, which in turn, is estimated to boost the market growth. As per the data by the World Bank, 82.36% of the total population of North America lives in urban settlements. Similarly, the market in the Europe region is estimated to gain significant share over the forecast period owing to the developing infrastructure in the region.

The market in the Asia Pacific region is estimated to witness highest CAGR over the forecast period on the back of increasing government initiatives to provide housing facilities to the growing population in several countries, such as, Japan, Singapore, China, India, and Hong Kong. Moreover, development of roadways in these countries, along with the overall economic development is estimated to boost the market growth. 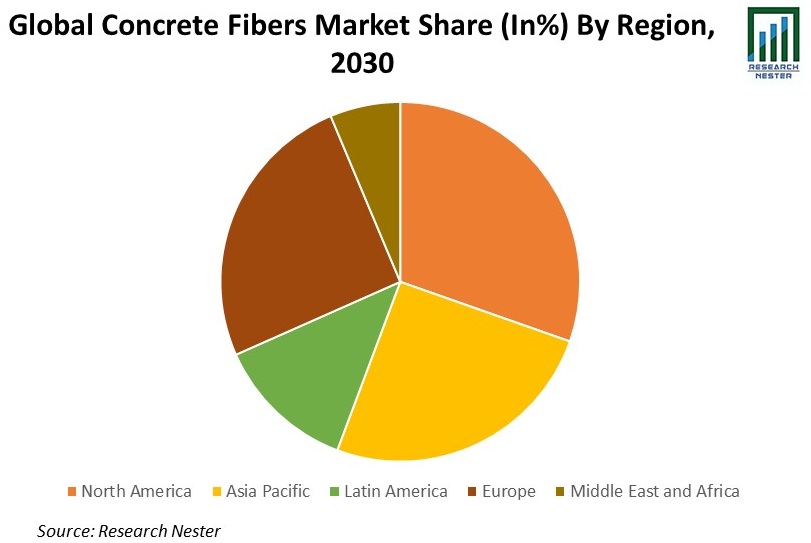 The global concrete fibers market is further classified on the basis of region as follows:

Our in-depth analysis of the global concrete fibers market includes the following segments:

What are the major factors driving the growth of the concrete fiber market?

What would be the CAGR of concrete fiber market over the forecast period?

What are the challenges affecting the concrete fiber market growth?

Which region will provide more business opportunities for growth of concrete fiber market in future?

The market in Asia Pacific region will provide ample growth opportunities owing to the growing urbanization and adoption of concrete fibers in construction activities.

Who are the major players dominating the concrete fiber market?

What are the segments in the concrete fiber market?

Which segment under the application segment captures the largest market size in the concrete fiber market?

With respect to application, transportation infrastructure segment is expected to grow at the highest CAGR during the forecast period owing to the increasing demand for efficient and safe roads and bridges.