The global chlamydia treatment market is estimated to garner a large amount of revenue and grow at a CAGR of ~10% over the forecast period, i.e., 2022 – 2030. The growth of the market can be attributed to the increasing prevalence chlamydia and other sexually transmitted diseases, and rise in demand for screening of the disease among people all around the world. According to the World Health Organization, each year, there are an estimated 376 million new infections with 1 of 4 STIs: chlamydia, gonorrhea, syphilis and trichomoniasis. Also, more than 1 million sexually transmitted infections (STIs) are acquired every day worldwide. Along with these, growing number of government initiatives and free diagnostic camps for spreading awareness about sexually transmitted infections is also predicted to be a significant factor driving market growth in the near future. Furthermore, favorable reimbursement policies for companies are evaluated to give impetus to research and development activities associated with the development of novel drugs, which in turn is projected to offer lucrative opportunities for market growth in the forthcoming years. 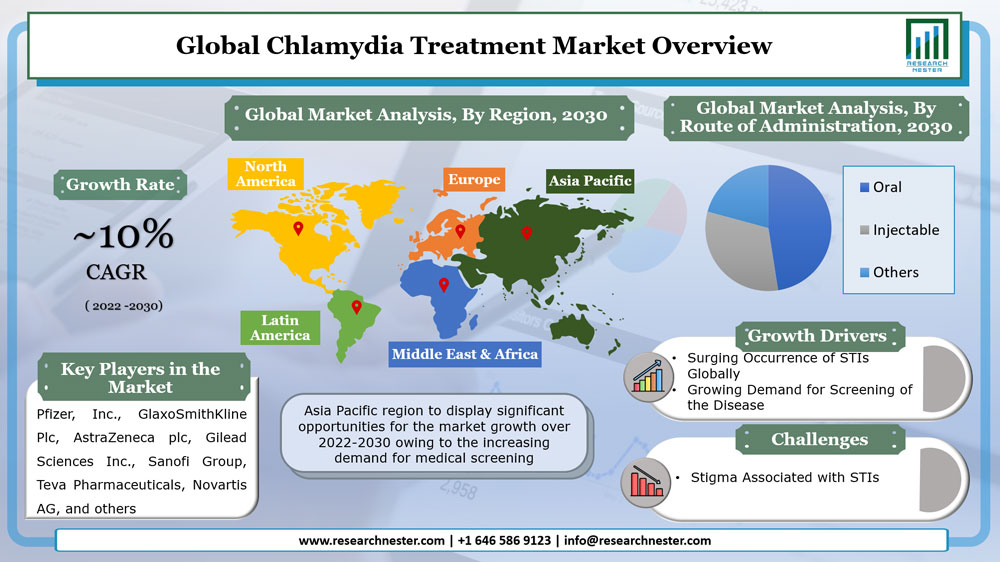 The market is segmented by test type into culture tests, nucleic acid amplification test (NAAT), direct fluorescent antibody test, serology tests, and others, out of which, the nucleic acid amplification test (NAAT) segment is anticipated to hold the largest share in the global chlamydia treatment market. This can be accounted to the high accuracy of the test in screening the disease. Apart from these, NAATs allow screening of large number of males and females using self-collected vaginal swabs or using urine without the requirement of a pelvic examination. Additionally, on the basis of route of administration, the oral segment is assessed to acquire the largest share over the forecast period owing to the non-invasive nature, ease of convenience, and cost-effectiveness of this type of route for drug administration.

On the basis of geographical analysis, the global chlamydia treatment market is segmented into five major regions including North America, Europe, Asia Pacific, Latin America and the Middle East & Africa region. The market in Asia Pacific is estimated to witness noteworthy growth over the forecast period on the back of the growing demand for medical screening and burgeoning need for raising awareness about STIs. In addition, rapid growth of biopharmaceutical industry and rising government support for improving the healthcare infrastructure are also anticipated to drive the region’s market growth in the future. Moreover, the market in North America is projected to grab the largest share during the forecast period ascribing to the high adoption rate of medical screening, high prevalence of STDs, and presence of a large number of pharmaceutical and biopharmaceutical companies in the region. As per the Centers for Disease Control and Prevention, in 2019, a total of 1,808,703 cases of Chlamydia trachomatis infection were reported, making it the most common notifiable condition in the United States for that year. 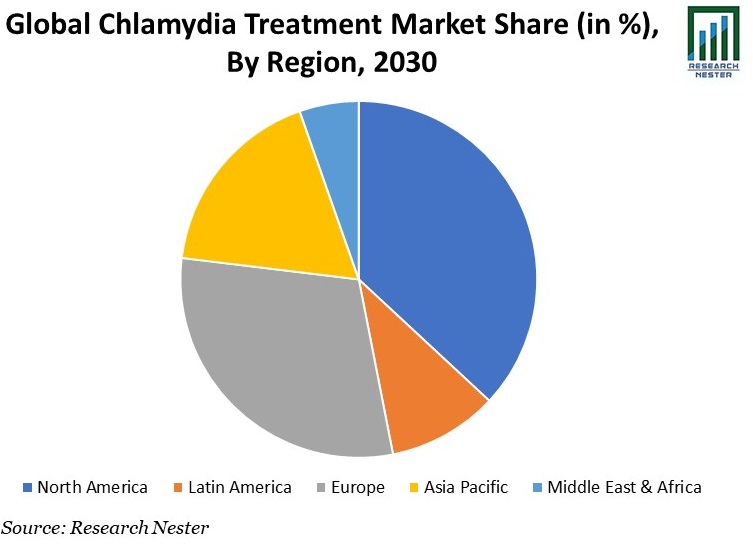 The global chlamydia treatment market is further classified on the basis of region as follows:

Our in-depth analysis of the global chlamydia treatment market includes the following segments:

1) What are the major factors driving the growth of the chlamydia treatment market?

2) What would be the CAGR of chlamydia treatment market over the forecast period?

3) What are the challenges affecting the chlamydia treatment market growth?

Ans: Social stigma associated with STIs is estimated to hamper the market growth.

4) Which region will provide more business opportunities for growth of chlamydia treatment market in future?

5) Who are the major players dominating the chlamydia treatment market?

7) What are the segments in the chlamydia treatment market?

Ans: The market is segmented by test type, route of administration, end user, and by region.

8) Which segment captures the largest market size in the route of administration segment in the chlamydia treatment market?

Ans: The oral segment is anticipated to hold largest market size and is estimated to grow at a notable CAGR over the forecast period and display significant growth opportunities.