On the other hand, Germany, U.K. and France are the prominent countries that are driving the growth of the Europe chiral chemicals market, where Germany accounted for the largest market share of around 25% in the year 2018. 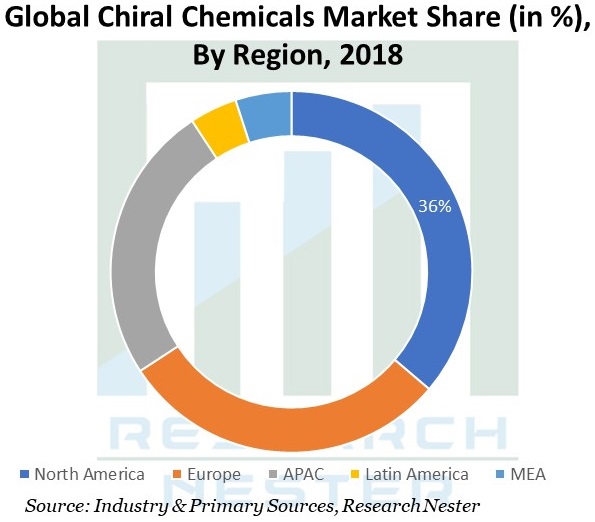 Healthcare infrastructure around the world have increased massively over the years. The government of the nations are increasingly investing on R&D activities, especially in the pharmaceutical industry for the identification of new drug formulations from several new chemical compounds, one such being the chiral chemicals, which are used massively nowadays as antihistamines, antivirals, in cancer therapies and several others, apart from chemical diagnostics and research applications. Additionally, pharmaceutical manufacturers prefer using chiral chemicals owing to their superior chemical properties generated by the geometrical and superimposable properties, along with the increasing demand for pure enantiomeric drug formulations in the medical and pharmaceutical industry. Apparently, increasing demand for medicines generated by the rising geriatric population around the world, which is also raising the necessity of pharmaceutical manufacturers to increase the production of medicines, coupled with the increasing demand for chiral chemicals from the flavors and fragrance industry are some of the factors anticipated to drive the growth of the global chiral chemicals market.

Several nations around the globe have imposed restrictions with the use of chiral chemicals which is anticipated to hamper negatively towards the growth of the global chiral chemicals market.

What are the major factors driving the growth of the Chiral Chemicals market?

Growing pharmaceutical industry and increasing investments of R&D activities are some of the major factors that are driving the growth of the market.

What would be the CAGR of Chiral Chemicals Market over the forecast period?

Which region is currently holding dominating share in the Chiral Chemicals market?

Which region will provide more business opportunities for growth of Chiral Chemicals market in future?

Who are the major players dominating in the Chiral Chemicals market?

What can be the significant growth opportunity for the method segment in the global chiral chemicals market?

The traditional separation method segment, which is a sub-segment of the method segment, held the largest market share of around 47% in the year 2018 is anticipated to show significant growth opportunity.

Growing concerns regarding the restrictions imposed by several nations around the globe for the use of chiral chemicals are some of the factors anticipated to act as a barrier towards the growth of the global chiral chemicals market.