Internet is a collection of computers connected together to share resources and information. Internet connects only people whereas Internet of Things (IOT) connects all the things/devices/objects into the internet. IOT has caused the revolutionary change of "connecting people" to "connecting everything" globally. With the help of cellular IOT, billions of IOT enabled devices can be connected to the internet across the globe. Advanced cellular IOT technologies include LTE-M, NB-LTE-M, NB-IoT and 5G. Cellular IOT provides reliable connection of IOT devices, global coverage and low-cost hardware which were required for cellular IOT connections.

The cellular IOT market, in terms of value, is estimated around USD 1.7 Billion in 2017 and expected to grow rapidly during the forecasted period at a CAGR of around 27.10%. Numerous technology companies are investing in cellular IOT market as it has a tremendous potential to transform machine to machine and machine to human communication. It was estimated that by the end of the forecasted period there will be more than 45 Billion connected devices in the world, out of which 30 Billion will be IOT connected. 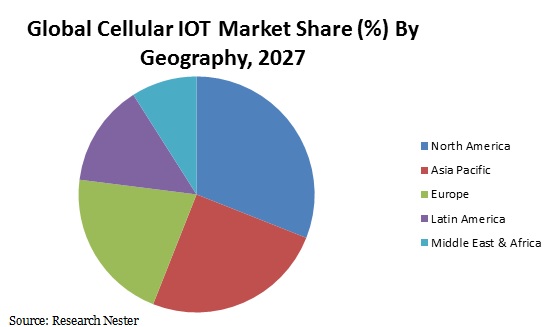 North America holds the largest market share of cellular IOT in terms of revenue as major IOT vendors are investing in the field of IOT ecosystem. Countries in North American such as U.S. and Canada dominate the cellular IOT market across the globe. IOT developments taking place in infrastructure, transportation, smart building, utilities and agriculture are also trigger the growth of cellular IOT market in this region. American government is investing great capital in IOT cellular area in order to create more jobs, new business opportunities and to bring socio-economic benefits to America. Internet of things is spreading their wings in various sectors such as transportation, emergency services, security, manufacturing and healthcare.Asia Pacific is anticipated to be the fast growing market of cellular IOT as countries such as China and India, as they have large pool of semiconductor dealers. It was estimated that Asia Pacific will account for almost 7.0 Billion connections in 2027. The size of the potential market for cellular IOT among this region also attracts the international companies to enter and invest into Asia Pacific cellular IOT market. Governments in Asian countries such as India are also taking interest in cellular IOT market and initiating numerous smart infrastructure projects. In India, Japan, China, Korea, Malaysia and Singapore governments have promoted national cellular IOT strategies, which further expected to encourage the growth of cellular IoT market in these countries.Europe is expected to show a lucrative growth during the forecasted period as various cellular IOT startups are establishing their feet in this region.The European market for cellular machine-to-machine (M2M) communications will grow rapidly during the forecasted period due to the promotion of new internet of things (IOT) based LTE-M and NB-IOT networks and services. CLICK TO DOWNLOAD SAMPLE REPORT

Global cellular IOT market is further classified on the basis of region as follows:

Capacity to accommodate large number of connected devices and increasing demand for extended network coverage are the factors which drives the market of cellular IOT globally. Cellular network options such as LTE and 3G require high amounts of power and these networks cannot be integrated with several applications where only a small amount of data is transmitted. On the other hand, cellular IOT consumes low power as compared to other networks and offer long range applications.

The global cellular IOT market is segmented as follows:

Key Information for Players to establish themselves in current dynamic environment.