The cancer immunotherapy market exhibits discernible innovation and is considerably proliferating various cancer immunotherapeutic drugs owing to the rising cases of cancer around the world. With various technological advancements over the years, there has been an increasing number of therapeutics being developed that are more targeted,specific and personalized to the cancer and the patient. As every cancer is different and how it manifests in every patient is unique resulting in specific treatment requirements, there has been an increasing trend in the recent years to develop more therapeutics that can selectively identify the cancer cells and evoke an immune response against them while leaving out the normal cells. This results in minimized side effects that are otherwise seen with conventional therapies such as chemotherapy and radiation therapy, eventually resulting in faster control and recovery with improved quality of life. The global cancer immunotherapy market reached USD 42,584.18 Million in 2017. Moreover, the market is expected to garner USD 86,678.7 Million by the end of 2027 by registering a CAGR of 7.5% during the forecast period 2018-2027.

Furthermore, China is the major contributor behind the growth of the Asia Pacific cancer immunotherapy market and is expected to achieve Y-o-Y growth rate of 9.1% in 2027. 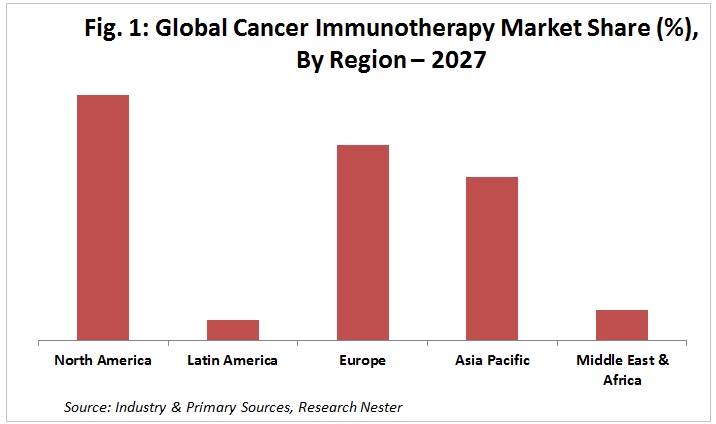 Global cancer immunotherapy market is segmented on the basis of technology into cellular immunotherapy, monoclonal antibodies, immune checkpoint inhibitors, cancer vaccines & cytokine therapy. Among these segments, monoclonal antibodies segment accounted for the highest market share of around 65% in 2017 and is further expected to capture the remarkable market share over the forecast period. This is primarily attributed to the technological superiority of this approach due to the high drug specificity towards cancer cells. These drugs are engineered to identify and generate a targeted immune response against the cancer cells based on their cell surface proteins and avoid the normal cells. In addition, immune checkpoint inhibitors segment of the cancer immunotherapy is expected to achieve Y-o-Y growth rate of 8.9% in 2027. 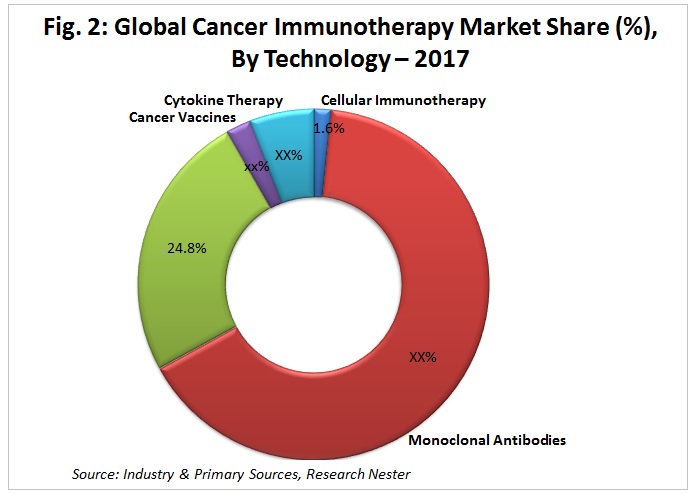 The global cancer immunotherapy market is divided by the end user segment into hospitals, ambulatory surgical center (ASC’s), clinics and others, out of which, the hospital segment contributed around 65% of the total market share in 2017 and is expected to witness dominant share during the forecast period i.e. 2018-2027. Further, the hospitals segment is projected to achieve Y-o-Y growth rate of 8.1% in 2027. Apart from this, ambulatory surgical centers is expected to grow significantly with maximum CAGR over the forecast period. This is primarily attributed to increasing number of facilities within the ASC category especially within the US and many of the European countries. There is an increasing number of treatment strategies being developed that do not require overnight stay. The increasing demand for out-patient services such as IL-2 infusion procedures that do not require overnight stay and are resulting in an increasing influx of patients within these facilities. Also, free standing or super-specialty clinics are trying to offer comprehensive therapeutic solutions that usually do not require overnight stay. 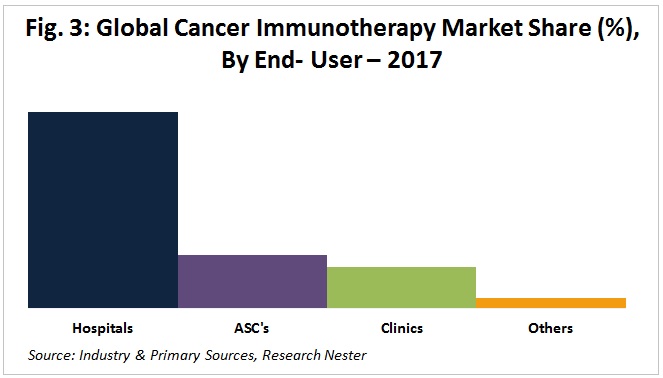 Immunotherapy is the process that suppresses or enhances the immune system so as to cure the cancer. It operates as complementary treatment to several other forms of treatments such as radio therapy and or chemotherapy. The major reasons behind the growing number of cancer cases around the globe are higher consumption of alcohol, generality of smoking and depletion of the ozone layer. The leading countries with the highest population of cancer patients around the world are United States, China, India, Germany and Russia among others. The global cancer immunotherapy market is thriving on the back of growing rate of cancer patients along with rising awareness and advanced personalized medicines regarding cancer among people.

The immunotherapy treatment is limited to developed regions such as North America and Western & Central Europe along with few developing regions such as India, China and Latin America which are believed to witness noticeable growth in upcoming years. Further, the time span and high cost required in the research and development of immunotherapeutic drugs might dampen the growth of the global cancer immunotherapy market.