Global Can Coatings Market Size, Forecast, and Trend Highlights Over 2023 - 2033

The global can coatings market is estimated to garner a revenue of ~USD 4 Billion by the end of 2033 by growing at a CAGR of ~4% over the forecast period, i.e., 2023 – 2033. Further, the market generated a revenue of ~USD 3 Billion in the year 2022. The growth of the market can be attributed to increase in consumption of canned food and beverage all across the world. An average of 23 cans are kept in kitchens by as many as about 95% of Americans, and about 85% of parents claim they never spend a week without consuming food from a can. 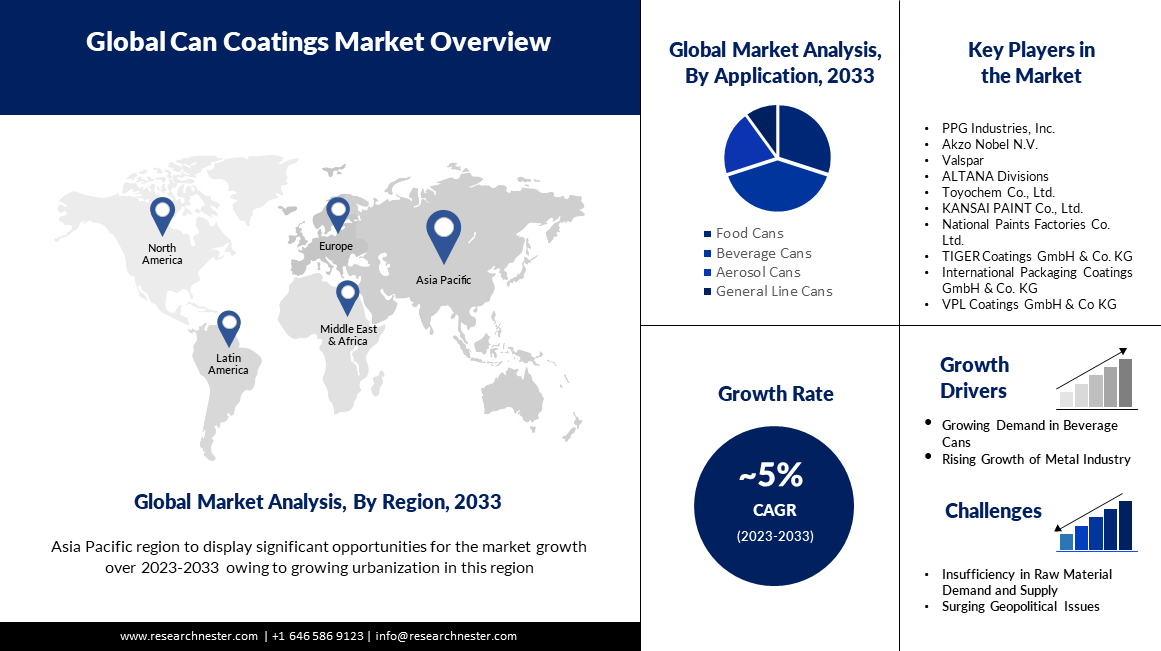 Food is the third-highest living expense, and canned goods are frequently less expensive than fresh or frozen options. Hence they are preferred more further expected to boost the can coatings market over the forecast period. Additionally, growth in chemical industry is another major factor estimated to boost the market growth. For instance, major chemicals were produced in greater quantities during 2022–23 (through to May 2022), reaching about 20 lakh tonnes, an increase of approximate 6% over 18 lakh tonnes during the same period the previous year.

The infrastructure industry in India is likely to experience the fastest growth in the transport sector, which is projected to expand at a CAGR of about 6 percent.

The Indian industry for cosmetics and personal care items is currently worth about USD 25 billion and is anticipated to grow to approximately USD 36 billion by 2025.

Approximately 3 billion people, or about 55% of the world's population, reside in cities. By 2050, approximately 6 out of 10 people will live in cities, with the urban population predicted to more than double from its current level.

Owing to the lockdown the demand and supply of raw material was disrupted which affected the market. However, volatility in prices is expected to affect the market in future. Hence this factor is estimated to hinder the market growth over the forecast period.

The global can coatings market is segmented and analysed for demand and supply by application segment into food cans, beverage cans, aerosol cans, and general line cans. Out of these segments, the beverage cans segment is anticipated to garner the largest revenue by the end of 2033, backed by growing consumption of beer, water, soda, and others. In 2018, the estimated annual beer consumption in the United States was 6.3 billion gallons, or 26.2 gallons per drinking-age adult.

Regionally, the global can coatings market is studied into five major regions including North America, Europe, Asia Pacific, Latin America and Middle East & Africa region. Amongst these markets, the market in Asia Pacific is projected to hold the largest market share by the end of 2033, backed by growing urbanization in this region. With an average yearly urbanisation rate of 3%, East Asia and the Pacific is the region of the globe with the fastest pace of urbanisation. By 2018, more than 1.2 billion people, or one-third of the world's metropolitan population, were anticipated to live in the region. 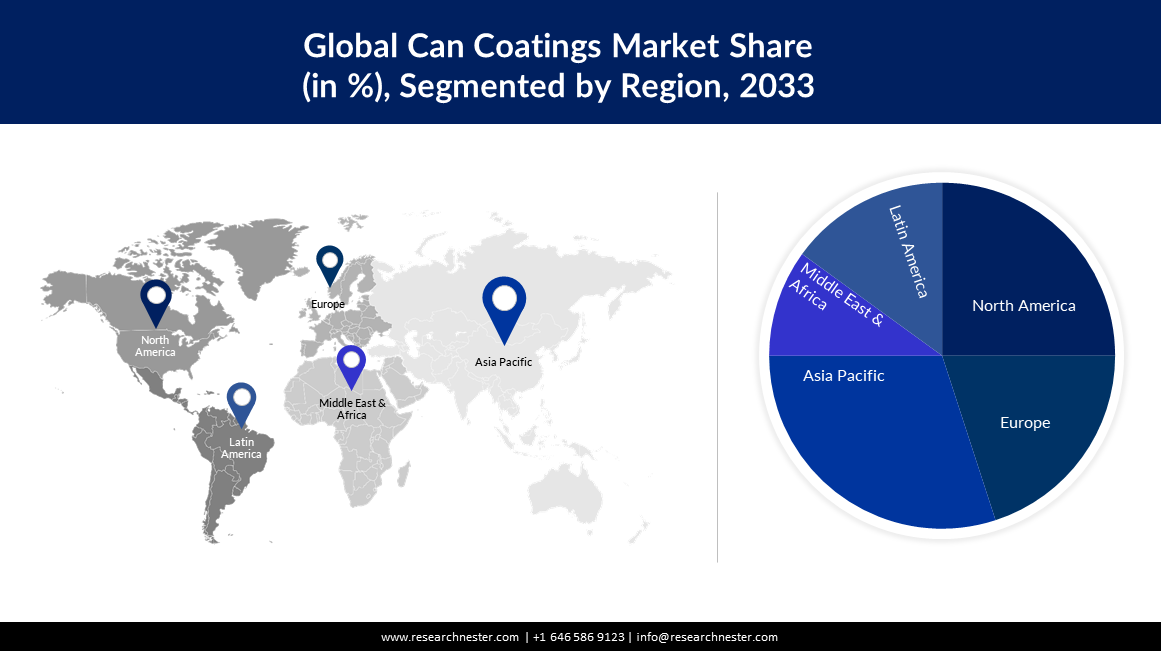 The global can coatings market is further classified on the basis of region as follows:

Our in-depth analysis of the global can coatings market includes the following segments:

What are the major factors driving the growth of the can coatings market?

The major factors driving the growth of the market are growing demand in beverage cans, rising growth of metal industry, growing transportation industry, and others.

What would be the CAGR of can coatings market over the forecast period?

What are the challenges affecting the can coatings market growth?

Insufficiency in raw material demand and supply, surging geopolitical issues, and stringent government issues are some of the major factors to hinder the growth of the market.

Which region will provide more business opportunities for growth of can coatings market in future?

Who are the major players dominating the can coatings market?

The major players in the market are PPG Industries, Inc., Akzo Nobel N.V., Valspar, ALTANA Divisions, and others.

What are the segments in the can coatings market?

Which segment captures the largest market size in application in the can coatings market?

The beverage cans segment is anticipated to garner the largest market size by the end of 2033 and display significant growth opportunities.