·   March 06, 2019: GridPoint, Inc., a smart buildings technology innovator, announced the launch of a new automated demand response (DR) program. The OpenADR 2.0 certified program can integrate with other DR aggregators or act as the aggregator.

The global building analytics market is estimated to garner notable revenue by growing at a CAGR of ~13.5% over the forecast period, i.e., 2022–2030. The growth of the market can be attributed to the increasing demand for real-time monitoring for buildings, especially in terms of energy consumption, and fault detection. Increasing urban population, along with increasing emergence of smart buildings, are another major factor estimated to drive the market growth. According to the data by the World Bank, 56.15% of the total population, around 4.352 billion individuals lived in urban settlements in 2020. Moreover, government initiatives promoting smart buildings, energy optimization in government buildings, and development of residential infrastructure are projected to boost the market growth. In addition to this, increasing penetration of technologies, including, IoT, cloud computing, artificial intelligence and automation, are estimated to promote the market growth. 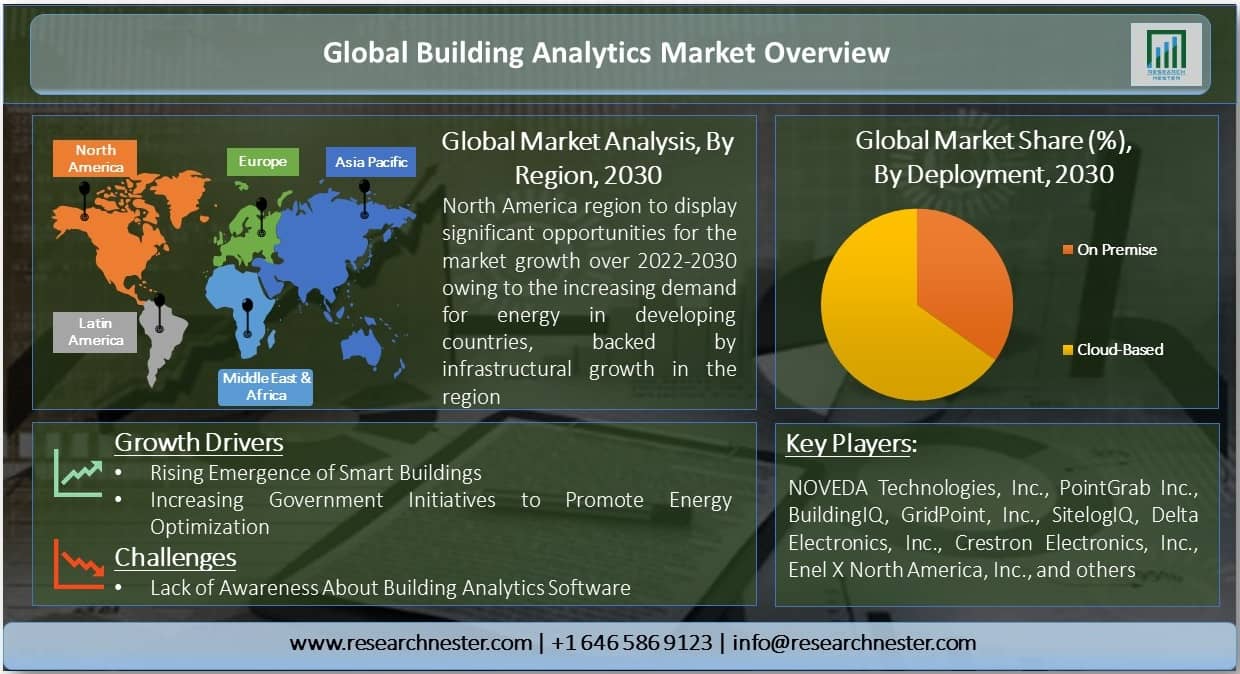 The global building analytics market is divided by deployment into on premise, and cloud-based, out of which, the cloud-based segment is anticipated to hold the largest share in the market during the forecast period on the back of increasing penetration of cloud computing among various end-user verticals. Moreover, increasing population of the tech-savvy generation in developing countries, along with increasing usage of smartphones, is anticipated to boost the segment growth.

On the basis of application, the market is segmented into fault detection and monitoring, energy management, parking management, emergency management, security management, and others, out of which the energy management segment is anticipated to garner a significant share over the forecast period, owing to the increasing awareness amongst people regarding energy conservation and optimization, combined with the rising need to monitor energy usage trends.

Regionally, the global building analytics market is segmented into five major regions including North America, Europe, Asia Pacific, Latin America and Middle East & Africa region. The market in the North America region is estimated to garner largest share over the forecast period on the back of growing construction industry, backed by urbanization and emergent smart buildings in countries, such as, Canada and the United States. According to the statistics by Bureau of Economic Analysis, in the first quarter of 2021, construction gross output of the United States amounted to USD 1,875.3 billion. Moreover, increasing awareness for energy optimization among the masses, and government initiatives for power management and monitoring, are estimated to further boost the market growth in the region.

The market in the Asia Pacific region is estimated to witness highest CAGR over the forecast period, on account of infrastructural development in countries, such as, India, Vietnam, South Korea, and Indonesia along with the increasing adoption of IoT in the region. Moreover, governments of these nations are taking various initiatives for the conservation of energy and sustainable developments of their respective nations. One such initiative is the formation of Bureau of Energy Efficiency by the government of India for overlooking the optimization of energy utilization in the country. 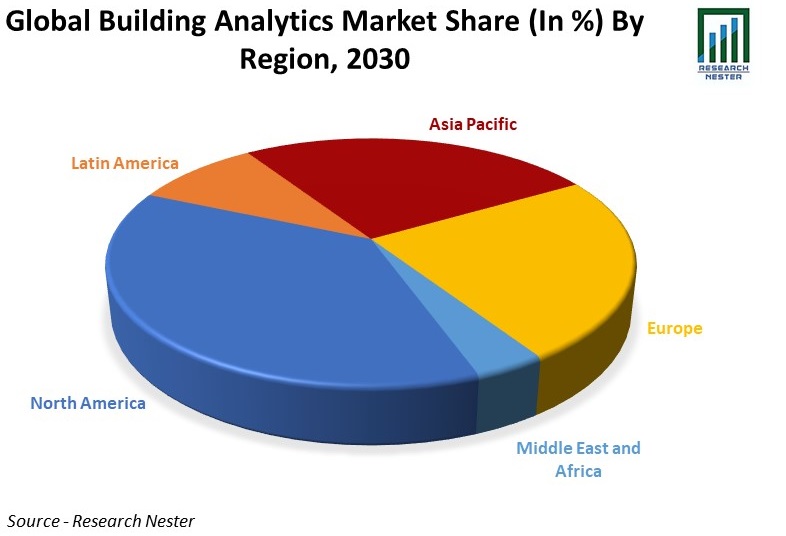 The global building analytics market is further classified on the basis of region as follows:

Our in-depth analysis of the global building analytics market includes the following segments:

What are the major factors driving the growth of the building analytics market?

What would be the CAGR of building analytics market over the forecast period?

What are the challenges affecting the building analytics market growth?

High cost of implementation is a major challenge that is estimated to hamper the market growth.

Which region will provide more business opportunities for growth of building analytics market in future?

The market in the Asia Pacific region will provide ample growth opportunities owing to the increasing demand for energy in developing countries, backed by infrastructural growth.

Who are the major players dominating the building analytics market?

What are the segments in the building analytics market?

The market is segmented by type, deployment, end-user, application, and region.

Which segment under the application segment captures the largest market size in the building analytics market?

With respect to application, the energy management segment is anticipated to hold the largest market share owing to the increasing awareness among people for energy conservation.