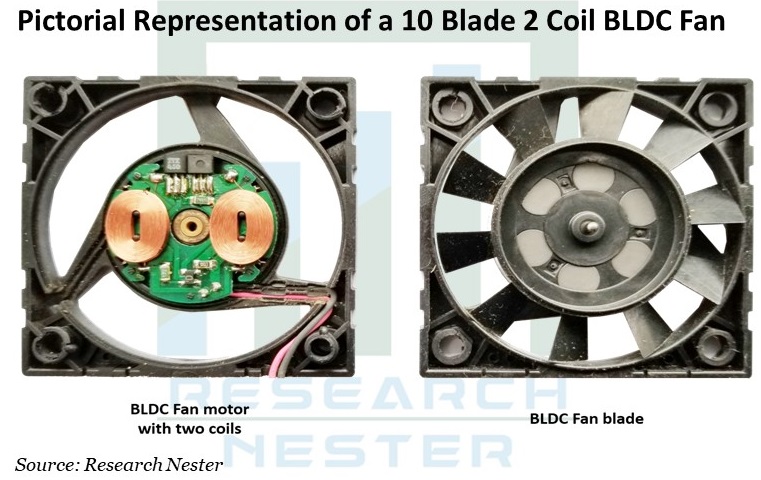 The global BLDC fan market is thriving on the back of increasing demand for cooling systems across varied end user applications, coupled with the growing need amongst end user industries for advanced technological products that are more efficient and effective and consume less energy. The brushless motors that are attached to the fan blade, have several benefits over conventional motors, such as high speed, high power-to-weight ratio, low maintenance and electronic control. Further, brushless motors are smaller in size as compared to a conventional motor. Hence, BLDC fans are widely used in computer peripherals, vehicles, aircrafts, hand-held power tools and other sophisticated applications. Moreover, increasing trade on fans around the world is also anticipated to promote significantly towards the growth of the global BLDC market. According to the statistics by the International Trade Center (ITC), exports of fans around the world increased from USD 10.14 million in the year 2010 to USD 17.09 million in the year 2019. 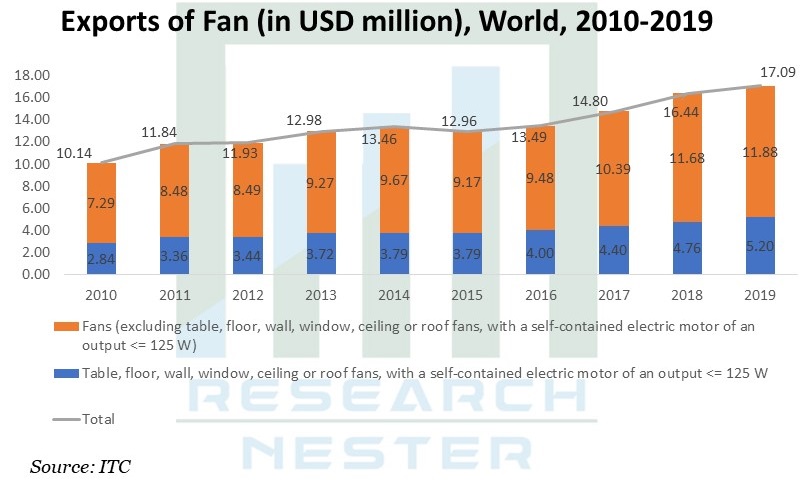 The global BLDC fan market is anticipated to record a significant CAGR throughout the forecast period, i.e. 2020-2028. The market is segmented by end user into domestic and commercial, out of which, commercial segment is anticipated to hold the largest market share owing to the increasing application of BLDC fan in varied end user application, such as in cooling systems, computer peripherals, medical devices, robotics, and others. Moreover, increasing demand for small and compact DC fans in electrical equipment across different industry verticals are some of the factors anticipated to drive the growth of the commercial segment in the global BLDC fan market. CLICK TO DOWNLOAD SAMPLE REPORT 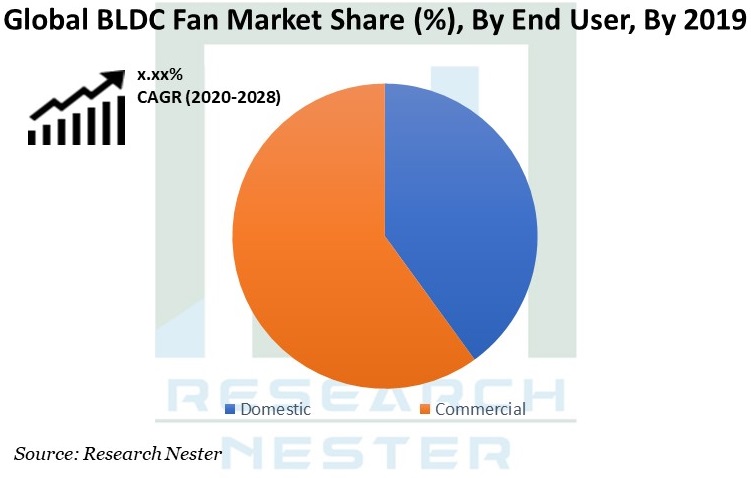 Fans and blowers are used in various end user applications, ranging from ceiling fans for domestic use, to multiple blade fan of various sizes and dynamic air flow that are used in different industrial equipment for cooling and efficient air flow circulation. Increasing demand for modern equipment design that are energy efficient and are also compact in size, require sophisticated cooling system. BLDC fans are small in size and hence they are massively used in various equipment, especially in equipment which have sophisticated cooling processes. Moreover, BLDC fans are designed to deliver greater air flow at a low energy consumption rate, making it more efficient as compared to conventional fans. On the other hand, these fans are also smaller in size as compared to conventional fans and can be made to fit easily in sophisticated equipment where the focus on cooling is high, such as high-end personal computers, or communication server devices and other medical equipment.

Modern ceiling fans for use in domestic purpose are designed to save energy and are provided with a tint of luxury for greater aesthetic value. Ceiling fans are widely used in low- and middle-income nations where individuals cannot afford air conditioning systems. Ceiling fans play a major role in these households. Increasing disposable income amongst individuals is thereby anticipated to raise the consumption of electrical appliances, such as ceiling fan, especially in moderate and temperate climate areas. Such factors are anticipated to drive the growth of the global BLDC fan market.

BLDC fans which are used in domestic applications are priced comparatively high by displaying benefits of greater energy saving and energy efficiency. Individuals with low disposable income in under-developed and several developing nations, who cannot afford such high priced fans, is anticipated to restrict the sales of the product, and in turn hamper the growth of the market. Moreover, lack of product awareness amongst consumers worldwide is also anticipated to severely restrain the growth of the global BLDC fan market.

Our in-depth analysis of the global BLDC fan market includes the following segments:

The market in Asia Pacific is anticipated to hold the largest market share owing to the presence of nations, such as China, Japan, Vietnam and India, where manufacturing of industrial electronic equipment are quite high. As these industrial equipment require cooling solutions, demand for BLDC fans in the commercial sector in these nations are anticipated to remain high over the forecast period. On the other hand, several nations in the region have a temperate climate with temperatures ranging up to 55°C during summers. Increasing demand for cooling solutions for domestic applications in these nations is thereby anticipated to drive the growth of the BLDC fan market in Asia Pacific.

The global BLDC fan market is further classified on the basis of region as follows: