The global bitumen modifier market is estimated to garner remarkable revenue by growing at a notable CAGR over the forecast period, i.e., 2022 – 2031. The growth of the market can be attributed to escalating demand in the infrastructure sector and construction industry. The infrastructure sector is projected to grow at a remarkable pace during the forecast period. The infrastructure sector includes private and public construction of railways, tunnels, sewers, water and gas supply, and others. For instance, the market for wastewater treatment was estimated to reach approximately USD 20 billion during the forecast period. Furthermore, the bitumen modifier is utilized for waterproofing to avoid seepage of water on roads, runways, platforms, roofs, and flooring. It is noticed that roads need waterproofing every 10 years depending on the material. Meanwhile, the growing construction of roads, highways, and bridges across the globe are anticipated to boost the market growth. Additionally, countless giant airport construction projects are in the execution phase and can be a significant growth factor for the global bitumen modifier market. All these factors are projected to boost the growth of the market over the forecast period. 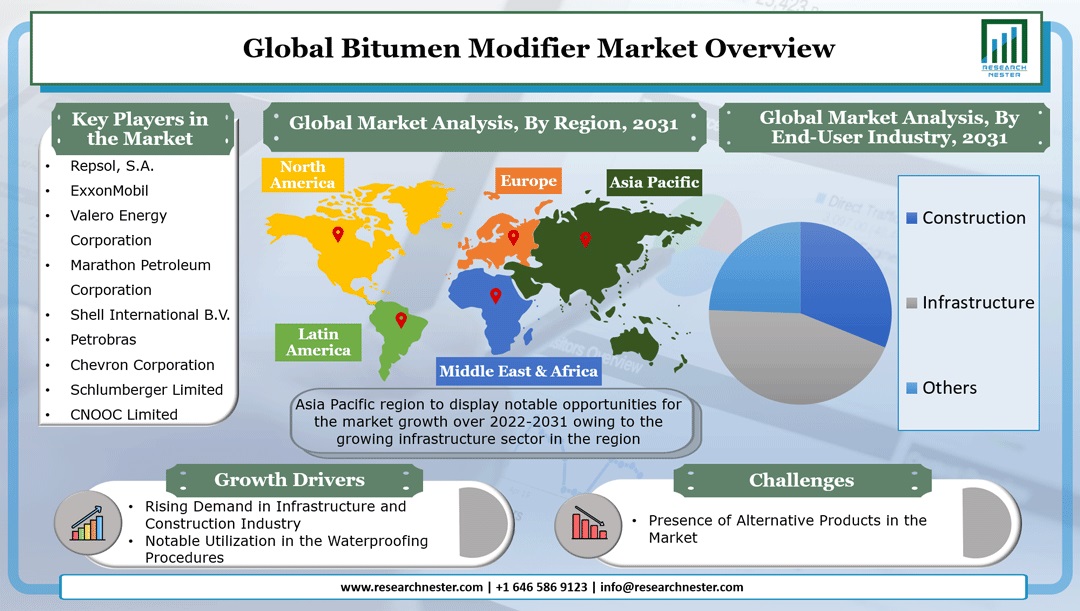 The market is segmented by end-user industry into the construction, infrastructure, and others, out of which, the infrastructure segment is anticipated to hold the notable share in the global bitumen modifier market on account of the rising construction of roads to solve vehicular, and pedestrian traffic issues, and growing transportation sector. A higher prevalence of death due to pedestrian traffic was observed in recent decades. A report published by the Center for Disease Control and Prevention (CDC) in 2017 showed that 2017, 5,977 pedestrians died in traffic crashes in U.S.

The chemical industry is a major component of the economy. According to the U.S. Bureau of Economic Analysis, in 2020, the U.S., the value added by chemical products as a percentage of GDP was around 1.9%. Additionally, according to the World Bank, the Chemical industry in the U.S. accounted for 16.43% of manufacturing value-added in 2018. With the growing demand from end-users, the market for chemical products is expected to grow in the future. According to UNEP (United Nations Environment Programme), the sales of chemicals are projected to almost double from 2017 to 2030. In the current scenario, Asia Pacific is the largest chemical producing and consuming region. China has the world’s largest chemical industry, which accounted for annual sales of approximately more than USD 1.5 trillion, or about more than one-third of global sales, in recent years. Additionally, a vast consumer base and favourable government policies have boosted investment in China’s chemical industry. Easy availability of low-cost raw material & labour as well as government subsidies and relaxed environmental norms have served as a production base for key vendors globally. On the other hand, according to the FICCI (Federation of Indian Chambers of Commerce & Industry), the chemical industry in India was valued at 163 billion in 2019 and it contributed 3.4% to the global chemical industry. It ranks 6th in global chemical production. This statistic shows the lucrative opportunity for investment in businesses in Asia Pacific countries in the upcoming years.

The market in the North America region is estimated to witness significant growth over the forecast period owing to the technological advancement, and growing government investment in infrastructure. 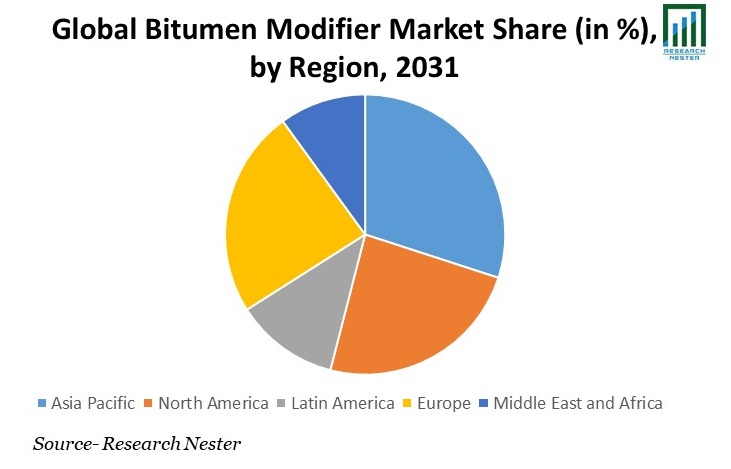 The global bitumen modifier market is further classified on the basis of region as follows:

Our in-depth analysis of the global bitumen modifier market includes the following segments:

What are the major factors driving the growth of the bitumen modifier market?

Growing demand in the construction industry and infrastructure sector and noteworthy utilization in waterproofing of roads, runways, platforms, roofs, and flooring are the major factors driving the growth of the bitumen modifier market.

What would be the CAGR of bitumen modifier market over the forecast period?

Who are the major players dominating the bitumen modifier market?

What are the segments in the bitumen modifier market?

The market is segmented by type, application, end-user industry, and by region.

Which sub-segment captures the largest market size in the end-user segment in the bitumen modifier market?

The infrastructure segment is anticipated to hold the largest market size in value and is estimated to grow further over the forecast period and display significant growth opportunities.

The availability of alternative products in the market is estimated to hamper market growth.

Which region will provide more business opportunities for the growth of the bitumen modifier market in the future?

Asia Pacific region will provide more business opportunities for growth of the bitumen modifier market in the future on the back of constantly developing infrastructure sector and construction industry.