Biometric Payments Market Segmentation By Authentication Type (Voice, Face, Palm-Vein, Finger-Vein, Behavioral, Palmprint and Iris); By Architecture (Cloud Based and Devices Based) and By Type of Payment (Mobile, Wearable, Naked, IoT and Others) - Global Industry Demand Analysis and Opportunity Assessment 2018-2027

The growth of the global biometric payments market is thriving on the back of advancement in biometric payment technology around the world. Increasing number of users of smart devices along with the rising penetration of the internet is helping raise the environment for cashless payments, which in turn is anticipated to drive the growth of the global biometric payment technology market. Moreover, the need to mitigate the security challenges, increasing digitization, development in online banking services and the need for protection of data are some of the factors raising the need for the development and adoption of biometric technology. According to the statistics by the GSM Association, smartphone penetration across regions around the world was led by North America, followed by Europe, Latin America and others in the year 2017. Moreover, the statistics also anticipated that the smartphone penetration in North America in the year 2025 will reach to 91%. 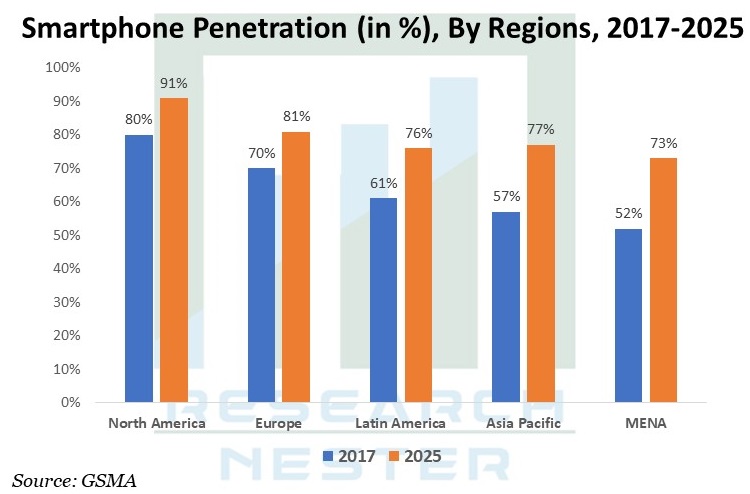 The global biometric payments market reached USD 442.9 billion in 2018 and is expected to garner USD 16030.2 billion by the end of 2027 by registering a CAGR of 49.0% across the globe over the forecast period 2019-2027. Further, the worldwide market of biometric payments is anticipated to achieve a Y-o-Y growth rate of 49% in 2027 as compared to the previous year. CLICK TO DOWNLOAD SAMPLE REPORT

Further, nations such as Germany, UK and Rest of Europe are the prominent countries that are driving the growth of the Europe biometric payments market, where in the year 2018 Rest of Europe held the largest market share of 43%. 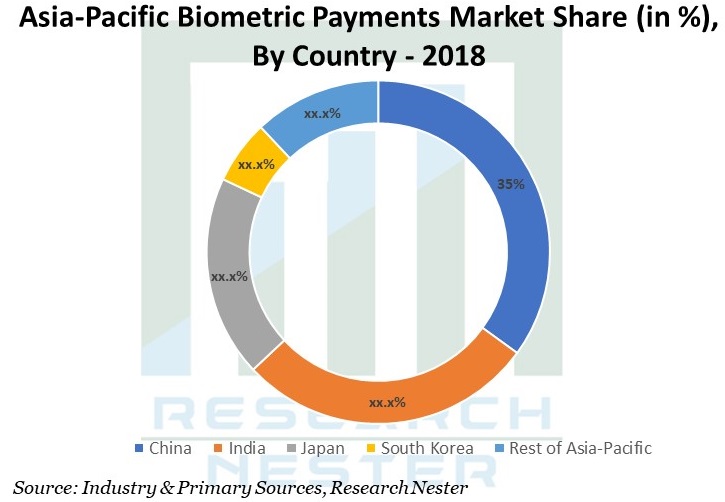 The global biometrics payment market has been segmented on the basis of authentication type into voice, face, palm-vein, finger-vein, behavioral, palmprint and iris. Finger-vein segment with around 46% share in 2018, occupies the largest market share of biometric payments across the globe. Additionally, finger-vein segment is anticipated to cross USD 8500.0 billion by the end of 2027 by registering a CAGR of 51.4% over the forecast period. Further, the voice segment is estimated to grow with a significant CAGR of 49.6% over the forecast period. 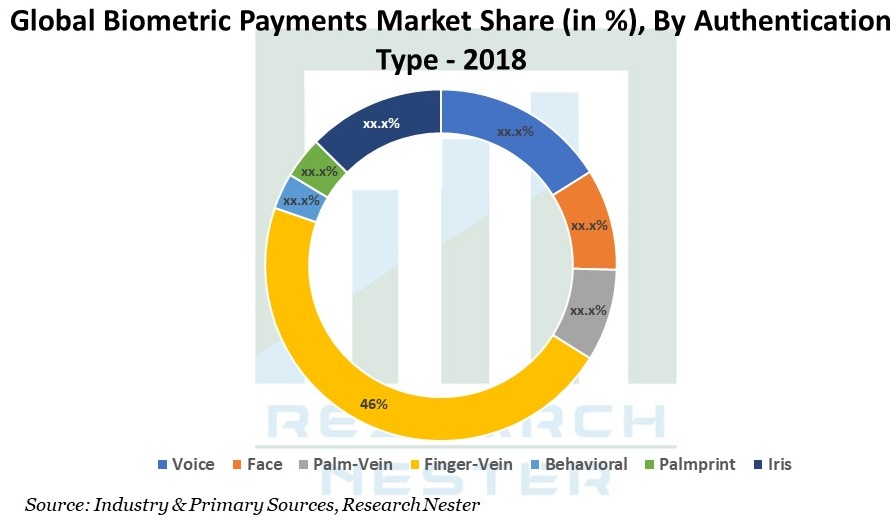 Global biometric payments market is also segmented on the basis of architecture into cloud-based and device-based. It is observed that the device-based segment held the largest market share in the year 2018 and is anticipated to attain a CAGR of 46.8% during the forecast period. The device-based segment is further anticipated to grow by 32x and attain an absolute $ opportunity of USD 9228.2 billion during the assessment period. The segment is also estimated to grow with a Y-o-Y growth rate of 46.4% in the year 2027 as compared to the previous year.

Several security concerns raised due to the increasing number of cybercrimes around the globe has led to the need for taking steps on security measures and has also contributed to the development of numerous authentication methods, one such being the biometric payments, as these type of authentication methods help users to access their accounts easily without the need for memorizing long passwords. Additionally, the concern for secure payments in the banking system and the need to protect from online frauds along with the increasing adoption of smartphones around the world are some of the factors anticipated to drive the growth of the global biometric payments market.

Lack of proper technological infrastructure in several nations around the globe, along with other technical barriers observed in biometric systems, such as issues with facial and voice recognition, and fear of security uncertainties are some of the major factors that are limiting the growth of the biometric payments market around the globe.

1) What are the major factors driving the growth of the Biometric Payments market?

Ans: Growing concern for cybercrimes and the concern for secure payments in the banking system are some of the major factors that are driving the growth of the market.

2) What would be the CAGR of Biometric Payments market over the forecast period?

4) Which region will provide more business opportunities for growth of Biometric Payments market in future?

Ans: Europe is anticipated to provide more business opportunities for the growth of the market in the future.

5) Who are the major players dominating the Biometric Payments market?

7) What are the major segments in the global biometric payments market?

Ans: The market is majorly segmented by authentication type, architecture, type of payment and by region.

8) What can be the significant growth opportunity for the authentication type segment in the global biometric payments market?

Ans: The finger-vein segment, which is a sub-segment of the authentication type segment, held the largest market share of around 46% in the year 2018, is anticipated to show significant growth opportunity in the market.

Ans: Lack of proper technological infrastructure in several nations is a major factor anticipated to act as a barrier towards the growth of the global biometric payments market.