The global next-generation memory market is estimated to garner a revenue of USD 30069.1 Million by the end of 2030, by growing at a CAGR of 27.85% over the forecast period, i.e., 2021 – 2030. Moreover, in the year 2020, the market garnered a revenue of USD 2885.4 Million. The growth of the market can be attributed to the rising demand for universal memory devices, backed by the numerus benefits associated with the memory type. A universal memory device refers to a data storage device that combines the cost benefits of DRAM, the speed of SRAM, and the non-volatility of flash memory. The rising advancements in the development of advanced memory solutions, is also expected to contribute to the market growth in the coming years. For instance, Lancaster University recently developed a non-volatile RAM, known as the ULTRARAM, which has the advantages of DRAM and flash with no notable drawbacks. Besides this, the rise in demand for faster, efficient, and cost-effective memory solutions, backed by the increasing advancements in computing technology, and surge in cryptocurrency mining worldwide, is also expected to generate significant opportunities for market growth in the coming years. 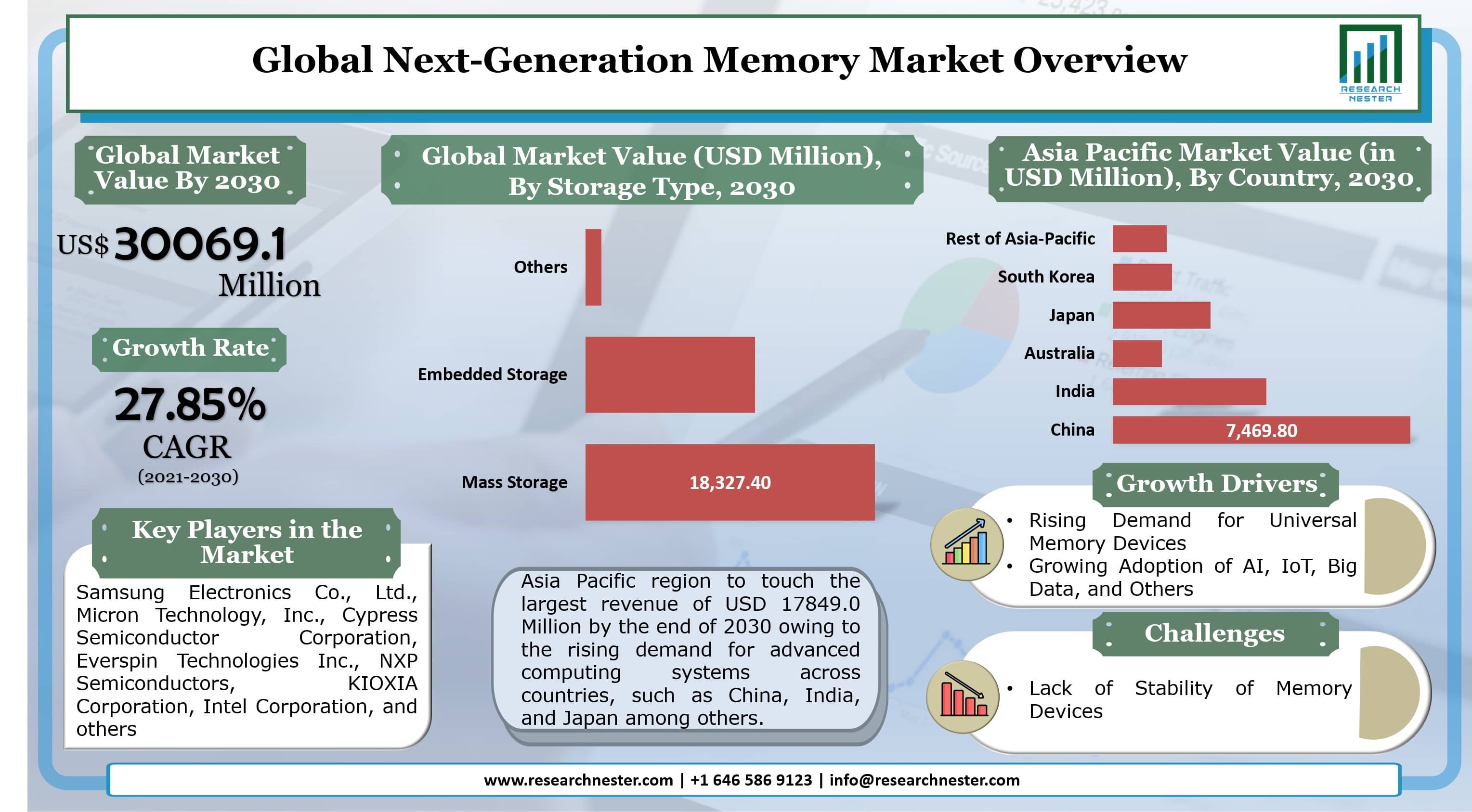 The global next-generation memory market is also anticipated to grow on account of the rising need for high bandwidth, low power consuming, and high scalable memory devices, backed by the surge in the adoption of advanced technologies, such as big data, artificial intelligence (AI), machine learning (ML), cloud computing, and others. For instance, advanced network systems, which use data packet buffering, data packet processing, and cloud storage systems, require data transfer speeds of more than 100Gb/s. As a result, volatile memory solutions, such as hybrid memory cube (HMC) and high-bandwidth memory (HBM), which are known to have speeds of over 160Gb/s and 128Gb/s respectively, are used widely to match the requirements of high data transfer speeds. On the other hand, Intel and Micron recently announced the launch of 3D XPoint technology that brought non-volatile memory speeds up to 1000 times faster than NAND memory. Additionally, the rising sales of computing devices, such as desktop PCs, laptops, tablets, and smartphones, is also expected to drive the demand for next-generation memory solutions, and in turn, boost the market growth. For instance, the shipment of laptops increased from around 160 Million units in the year 2016 to close to 270 million units in the year 2025. Alternatively, the yearly smartphone unit sales worldwide to the end-users touched nearly 1.40 Billion in the year 2020.

Regionally, the global next-generation memory market is segmented into five major regions including North America, Europe, Asia Pacific, Latin America and Middle East & Africa region. The market in the Asia Pacific is anticipated to garner the largest revenue of USD 17849.0 Million by the end of 2030. Moreover, the market registered a revenue of USD 1674.1 Million in the year 2020. One of the major factors anticipated to drive the growth of the market in the region is the rise in demand for advanced computing devices. Several countries in the region have witnessed a surge in growth in the use of internet. As a result, there is a growing need amongst the internet users for advanced computing products, which in turn, is anticipated to drive the demand for next-generation memory devices. According to the statistics by the International Telecommunication Union (ITU), the number of individuals using the internet in Asia & Pacific increased from 355 Million in the year 2005 to 1901 Million in the year 2019. 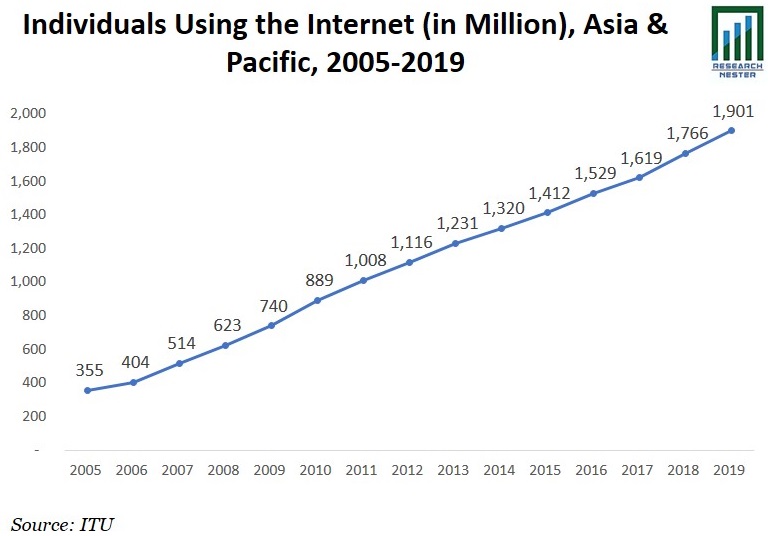 1) What are the major factors driving the growth of the next-generation memory market?

Ans: The rising demand for universal memory devices, along with the growing adoption of AI, IoT, big data, and others, are some of the major factors anticipated to drive the market growth in the coming years.

2) What would be the CAGR of next-generation memory market over the forecast period?

3) What are the challenges affecting the next-generation memory market growth?

Ans: The lack of stability of next-generation memory devices is one of the major factors estimated to hamper the market growth.

4) Which region will provide more business opportunities for growth of next-generation memory market in future?

Ans: The market in the Asia Pacific is anticipated to garner the largest revenue of USD 17849.0 Million by the end of 2030 and display significant business opportunities.

5) Who are the major players dominating the next-generation memory market?

7) What are the segments in the next-generation memory market?

Ans: The market is segmented by technology, storage type, size, end-use industry, and by region.

8) Which segment captures the largest market size in storage type segment in the next-generation memory market?

Ans: The mass storage segment is anticipated to garner the largest revenue of USD 18327.4 Million by the end of 2030 and display significant growth opportunities.