The most common types of batteries recycled are lead–acid automotive batteries (nearly 90% are recycled) and button cells (because of the value and toxicity of their chemicals). Additionally, other batteries that can also be recycled are Rechargeable nickel–cadmium (Ni-Cd), nickel metal hydride (Ni-MH), lithium-ion (Li-ion) and nickel–zinc (Ni-Zn). Lead acetate batteries can be used as car batteries, golf cart batteries, UPS batteries, industrial fork-lift batteries, motorcycle batteries, and commercial batteries.

The global battery recycling market is expected to account for a market value of around USD 17 billion at a CAGR of 24%.till the period of 2018-2027. Rise in demand for trash batteries from government and private organizations for further processing across the North America and Asia Pacific vigorously propelled growth of battery recycling market in forecasted period.

On the basis of regional platform, global battery recycling market is segmented into five major regions including North America, Europe, Asia Pacific, Latin America and Middle East & Africa region. Europe is expected to hold value share of 40% in the global battery recycling article. Additionally, countries in Europe region such as Germany, the United Kingdom, France, Russia, and Italy are increasingly following the directive initiative (protection, preservation and improvement of the quality of the environment) for environmental issue legalized by the government which in turn backs the growth of battery recycling market.

Asia Pacific is panned to observe substantial growth in battery recycling market on the rise of increased awareness towards safety and environmental issues. Additionally, increased awareness pertaining to electrical vehicles coupled with rising production of hybrid electrical vehicles in countries such as China and India is exhibiting for the growth of market. Moreover, North America is expected to raise the battery recycling market with increased demand for batteries by electric vehicle manufacturers. Additionally, robust demand in countries such as Saudi Arabia, UAE and South Africa is expected to showcase modest growth in global battery recycling market due to safety factors for contamination of soil and ground water level across the region over the forecasted period. 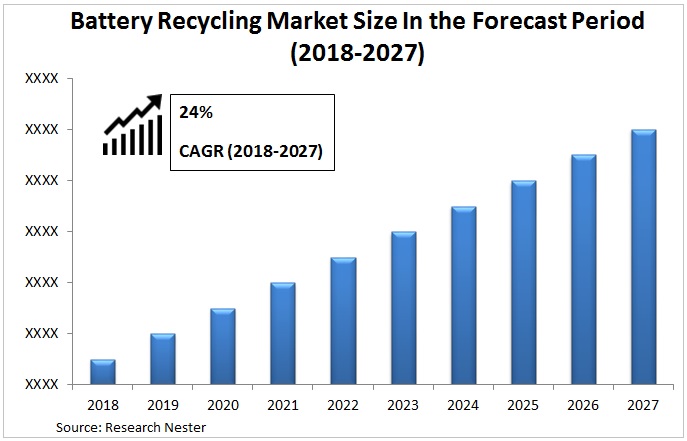 Regions such as North America and Asia Pacific are also expected to grow significantly in market due to increased demand for battery by the manufacturers of electric vehicles of both regions for recycling batteries.

Global Battery Recycling Market is further classified on the basis of region as follows: 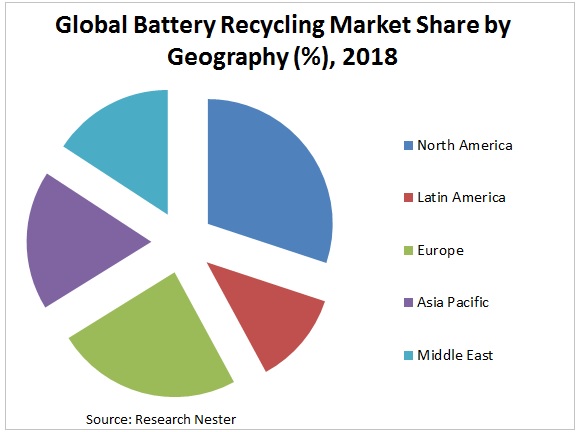 According International Energy Agency, 125 million electric vehicles were produced in 2017, totaled to 54% increment from previous year.

Increase demand of energy for operating various operations by industries such as commercial & residential is driving the growth of market. Additionally, the rising competition amongst the stake holders of battery recycling market is driving for positive growth in market.

Government support in several countries such as Germany, the United Kingdom, France, Russia, and Italy of European region for following the legalized norms of environmental and safety purpose is driving the growth of market in forecasted period.

Rising awareness regarding the water contamination

Disposing of solid battery as a trash in municipality garbage house can lead to contamination of ground water level, owing to chemicals released from batteries.

One of the key restraints which is expected to hamper the growth of market is friction problem caused by metals, which can cause fire in processing plant.