Battery packaging is referred to the process of designing a cell package for the combination of different cell modules and battery packs. The process of battery packaging is applicable to both primary and secondary battery types, and the packaging differs across battery applications. The packaging of a battery is important as it significantly influences several performance parameters of the battery, such as, lifetime, cyclability, ruggedness, safety and costs. The packaging technology of a battery involves several levels, and it differs across various battery forms. For instance, small batteries consist of one electrochemical cell and thereby the packaging already defines the outward appearance. Whereas, for higher voltages or higher capacities batteries, the cells are connected to modules so as to form a battery pack. 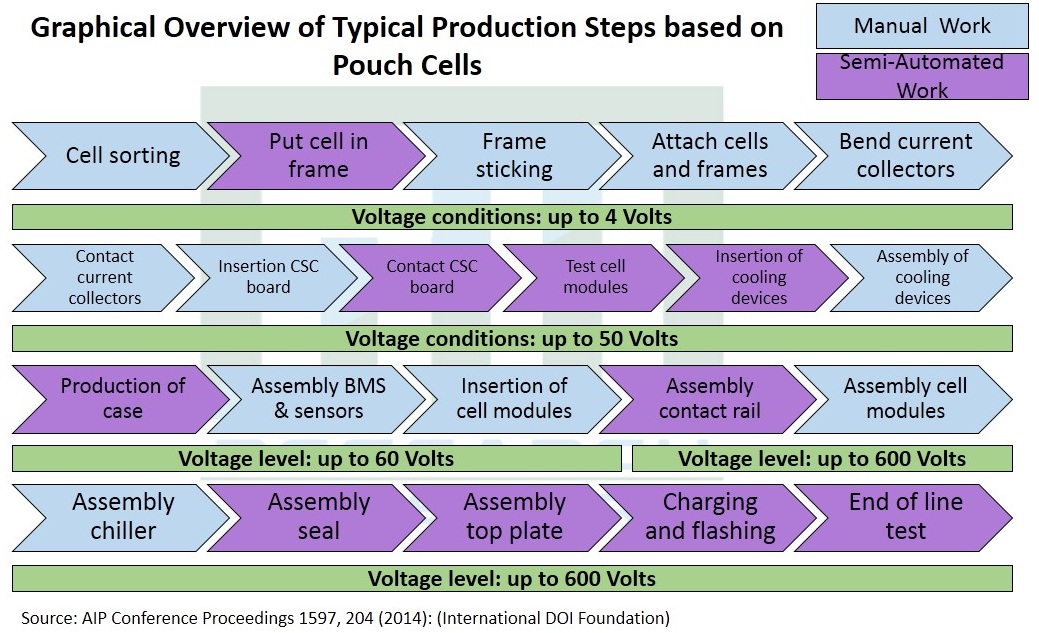 The global battery packaging market is thriving on the back of growing demand for different battery types, mostly driven by automotive starter batteries, portable computers and cell phones, high-power applications like electric vehicle batteries (EVBs) or storage for renewable energy sources amongst consumers around the globe. Additionally, innovations in cell chemistries and package design have significantly helped to alter low volume manufacture to mass production and thereby bring high-power batteries to viable markets. Such a factor has also helped to attain the goal of differentiating various battery packaging types and also contribute towards the manufacturability, varied production processes and deployment of various equipment as well as induce factory automation for the packaging of batteries. Moreover, different cell chemistries have also helped to define the essence of a battery and thereby lay the foundations for the suitability of batteries for a specific application, generating the need for varied packaging forms. According to the International Energy Agency (IEA), battery electric vehicle (BEV) deployment around the world increased from 0.23 million in the year 2013 to 3.29 million in the year 2018. 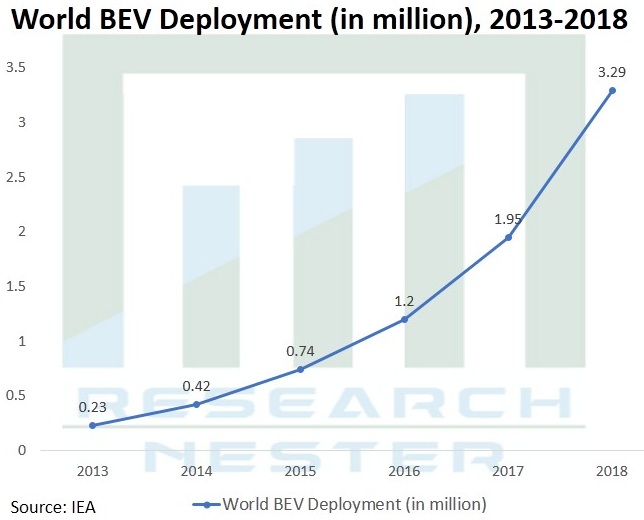 The market is anticipated to record a robust CAGR throughout the forecast period, i.e. 2020-2028. The global battery packaging market is segmented by battery type into lithium-ion and lead-acid, out of which, lithium-ion battery segment is anticipated to hold the largest market share on the back of rising demand for energy storage applications across consumers, for instance, e-bikes, e-vehicles, smartphones, laptops and other electrical consumer goods. Additionally, increasing use of lithium-ion battery in an immense range of daily use products on the back of rising technological advancements is anticipated to raise the demand for increase in packaging of the battery type in the coming years. Moreover, the global lithium-ion battery market is anticipated to record a CAGR of 16.2% over the forecast period 2018-2027 and is expected to reach a market value of USD 72.3 billion by 2027. According to the Consumer Survey statistical report for the month of December 2018 by Statistics Finland, mobile phone contributed to the largest share of equipment (98.9%) that prevailed in households in Finland during the month of November 2018. CLICK TO DOWNLOAD SAMPLE REPORT 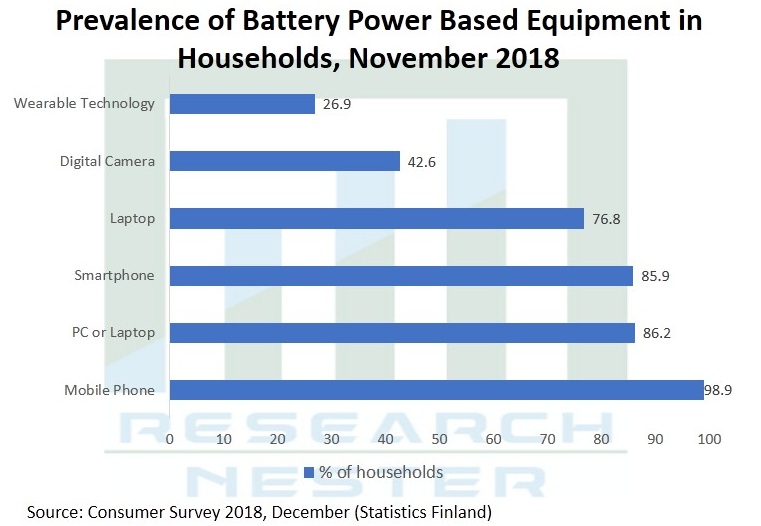 Significant transformation has been observed in the field of consumer electronics in the past couple of decades. Several technological advancements have helped the consumer electronics industry to develop several new products which found wide acceptance amongst the consumers. Products such as smart speakers have changed the way how consumers  experienced music. Similarly, the development of juice pack access portable battery cases have helped users to transform their traditional battery packs to smart cases. Moreover, wide acceptance of smart wearable devices amongst consumers on the back of increasing concern for health, and other consumer electronic goods, such as drones, along with medical health devices, such as cardiac pacemakers, batteries are used in almost every consumer goods in varied form and shape. The growing demand for consumer electronics, coupled with technological advancements in consumer electronic goods is anticipated to raise the demand for a greater number of battery forms varying in size and shape, thereby generating the need for packaging of the varied forms of batteries. Such factors are anticipated to drive the growth of the global battery packaging market during the forecast period. 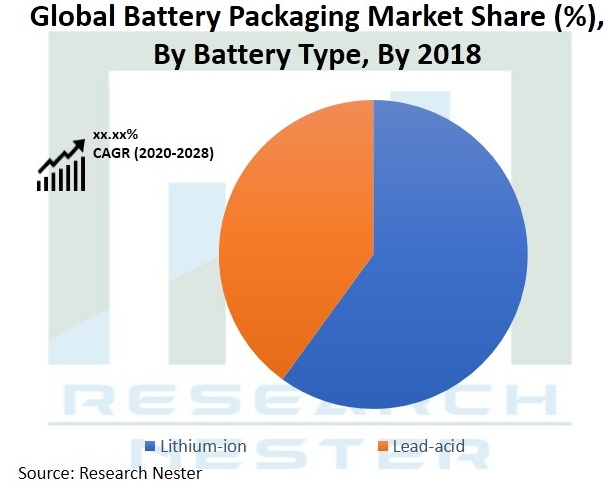 Increasing investments across nations for the deployment of solar plants and wind mills on the back of growing concern for the environment amongst nations around the globe is anticipated to raise the demand for batteries that are deployed to store the electrical energy produced by the sustainable energy sources. Rising adaptation of smart cities across economies and the deployment of numerous IoT goods that are powered by batteries as an alternative storage source of energy to support the development of smart cities are anticipated to impact positively towards the greater consumption of batteries across the sector. The utilization of numerous forms of batteries across these sectors is thereby expected to raise the investments of battery manufacturers so as to mitigate the demand for the varied battery forms that are deployed in the various sectors. Such a factor is anticipated to drive the growth of the global battery packaging market in the upcoming years.

Sustainable technologies come at a cost. Owing to high price of products that run in the sustainable technology model the demand for battery for such products is anticipated to impact tremendously, thereby affecting the need for battery packaging. Such a factor is anticipated to hinder the growth of the global battery packaging market during the forecast period.

Our in-depth analysis of the global battery packaging market includes the following segments:

Asia Pacific market is anticipated to hold the largest market share on the back 0f leading battery manufacturers present in the region, coupled with the presence of numerous nations in the region who are leading consumers for automobiles. Additionally, nations such as China is known for its large consumer electronics base, which is also anticipated to contribute towards the growth of the global battery packaging market in the region.

The global battery packaging market is further classified on the basis of region as follows: