The global auto-injector market is estimated to garner a revenue of USD 11354.6 Million by the end of 2030, by growing at a CAGR of 13.9% over the forecast period, i.e., 2021 – 2030. Further, in the year 2020, the market garnered a revenue of USD 3117.4 Million. The growth of the market can primarily be attributed to the increasing prevalence of allergies worldwide, such as anaphylaxis, along with the increasing cases of diabetes, which is driving the need for auto-injectors for injecting drugs to treat these diseases. According to the statistics by the Asthma and Allergy Foundation of America (AAFA), in the United States, allergic conditions are one of the most common health issues that affects both adult and children. It also stated that every year, it had been estimated that anaphylaxis to food resulted in 30,000 emergency room visits. On the other hand, according to the statistics by the International Diabetes Foundation (IDF), by the end of 2045, adults living with diabetes is expected to touch 700 Million. 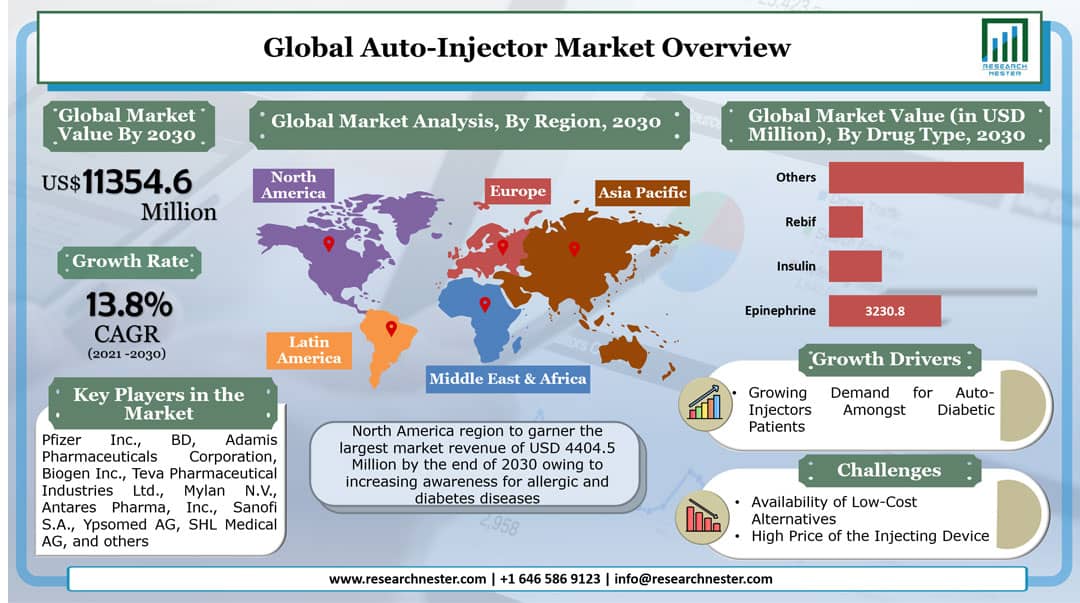 Anaphylaxis, which is a severe and sometimes a sudden allergic reaction, is life-threatening and requires immediate emergency response. The patients, who are at risk for anaphylaxis, are commonly prescribed epinephrine auto injector (EAI), which is known to be an effective solution for the management of the disease. On the other hand, people suffering from diabetes, are required to inject insulin almost on a daily basis, which is anticipated to drive the need for auto-injectors. Such factors are projected to drive the growth of the global auto-injectors market during the forecast period.

The auto-injectors market in Europe is anticipated to hold the second-leading market share during the forecast period and further attain a revenue of USD 4008.2 Million by the end of 2030, up from USD 1084.2 Million in 2020. The market in the region is segmented by country into the United Kingdom, Germany, Italy, France, Spain, Russia, Netherlands, and the Rest of Europe. Out of the market in these countries, the market in Germany is projected to attain the largest revenue of USD 846.1 Million by the end of 2030, and is further anticipated to grow with a CAGR of 14.3% during the forecast period.

1) What are the major factors driving the growth of the auto-injector market?

Ans: The growing prevalence of anaphylaxis and diabetes amongst individuals worldwide is one of the major factors anticipated to drive the market growth in the coming years.

2) What would be the CAGR of auto-injector market over the forecast period?

3) What are the challenges affecting the auto-injector market growth?

Ans: The availability of low-cost alternatives is one of the major factors estimated to hamper the market growth.

4) Which region will provide more business opportunities for growth of auto-injector market in future?

Ans: The market in Europe is projected to display significant business opportunities in the near future.

5) Who are the major players dominating the auto-injector market?

7) What are the segments in the auto-injector market?

Ans: The market is segmented by type, route of administration, drug type, application, demography, distribution channel, end-user, and by region.

8) Which segment captures the largest market size in type segment in the auto-injector market?

Ans: The disposable auto-injector segment is anticipated to grow with the highest CAGR of 14% during the forecast period and display significant growth opportunities.