The global epinephrine market is estimated to garner a revenue of ~USD 4 billion by the end of 2033 by growing at a CAGR of ~12% over the forecast period, i.e., 2023 – 2033. Further, the market generated a revenue of ~USD 1 billion in the year 2022. The growth of the market is primarily attributed to the worldwide growing prevalence of several allergic reactions, and neurological disorders. It is observed that, every year, 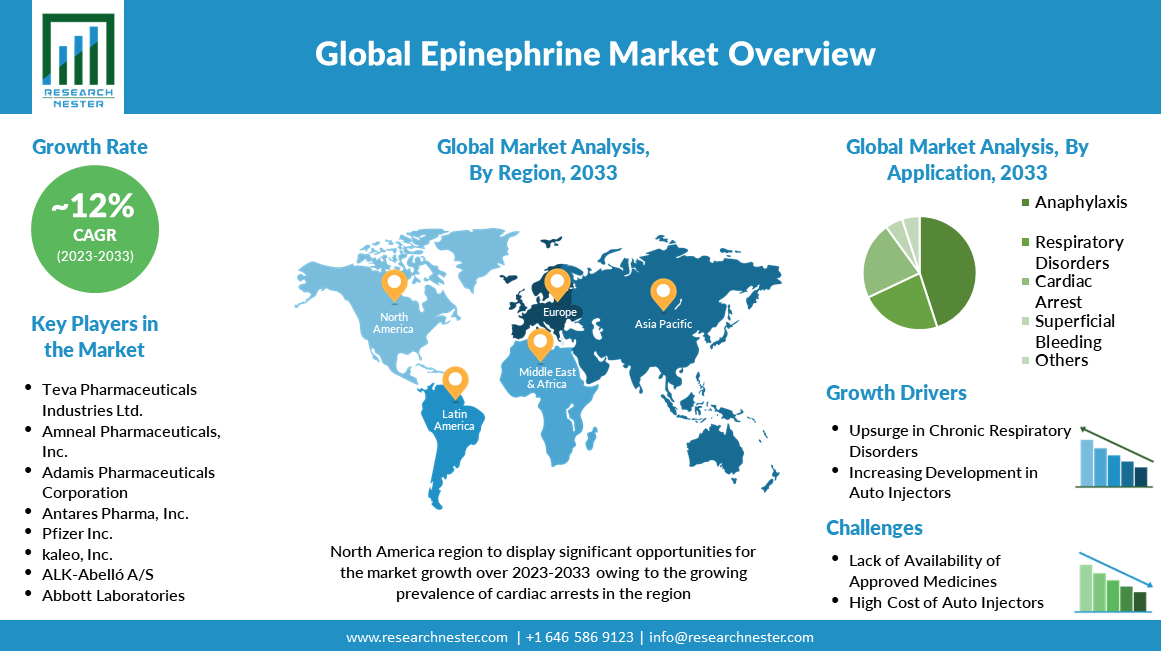 Adrenaline, also known as epinephrine, is a hormone and neurotransmitter which is generated by the adrenal glands. Epinephrine is used as the first line of treatment to help reverse the effects of anaphylaxis. Individuals suffering from anaphylactic shock frequently use auto-injectors as they have the ease to be administered by non-medical personnel. The rising number of anaphylaxis occurrence is fueling up the growth of the market over the forecast period. For instance, anaphylaxis, a severe allergic reaction to food, is thought to cause nearly 91,000 emergency room visits annually in the United States.

The global epinephrine market is segmented and analyzed for demand and supply by application into cardiac arrest, anaphylaxis, superficial bleeding, respiratory disorders and others. Out of these, the anaphylaxis segment is anticipated to hold the highest share over the forecast period owing to the development of technologically advanced products from the key players, and globally increasing prevalence of anaphylaxis in pediatrics as well as in adults. In a clinical study, it was observed that, the prevalence of anaphylaxis in children ranges from 1 to 762 per 100,000 person-years. The prevalence rate varied throughout continents; for example, while in Europe they ranged from 2.4 to 762 per 100,000 person-years to 0.8 to 70 in North America. Anaphylaxis incidence rate in the pediatric population ranged from 0.05% to 1.7% worldwide.

Regionally, the global epinephrine market is studied into five major regions including North America, Europe, Asia Pacific, Latin America and Middle East & Africa region. Amongst these markets, the market in North America is projected to hold the largest market share by the end of 2033 backed by the escalating count of patients suffering from respiratory diseases such i.e., asthma, expanding population, rising awareness about allergies, and growing prevalence of cardiac arrests in the region. According to a health survey conducted between 2018 - 2020, in the United States the surge of asthma cases in young individuals aged 18+ years reached to 21,030,480 that denotes an 8.3% growth. 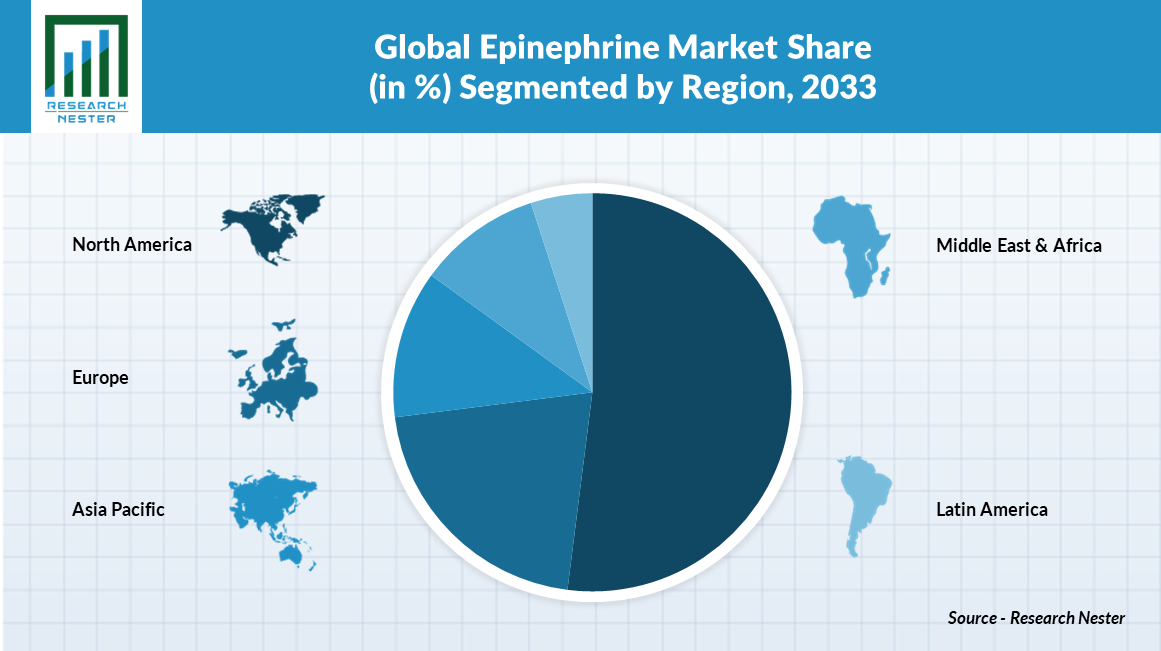 The global epinephrine market is further classified on the basis of region as follows:

Our in-depth analysis of the global epinephrine market includes the following segments:

What are the major factors driving the growth of the epinephrine market?

Upsurge in chronic respiratory disorders, growing occurrence of several types of allergic reactions, escalation in cardiac arrests are some major factors driving the growth of the market.

What would be the CAGR of epinephrine market over the forecast period?

What are the challenges affecting the epinephrine market growth?

High cost of auto injectors, lack of availability of approved medicines, and inadequate reimbursement in developing nations are estimated to hamper the market growth.

Which region will provide more business opportunities for growth of epinephrine market in future?

Who are the major players dominating the epinephrine market?

What are the segments in the epinephrine market?

The market is segmented by type, application, distribution channel, and by region.

The anaphylaxis segment is anticipated to garner the largest market size by the end of 2033 and display significant growth opportunities.