The global prefilled syringes market is estimated to garner a revenue of around ~USD 40,000 million by the end of 2033 by growing at a CAGR of ~12% over the forecast period, i.e., 2023 – 2033. Further, the market generated a revenue nearly of ~USD 19,000 million in the year 2022. The market is primarily driven by higher count of people infected by HIV or hepatitis. According to the Centers for Disease Control and Prevention, globally 296 million people are suffering with hepatitis-B. and 58 million people have hepatitis-C. 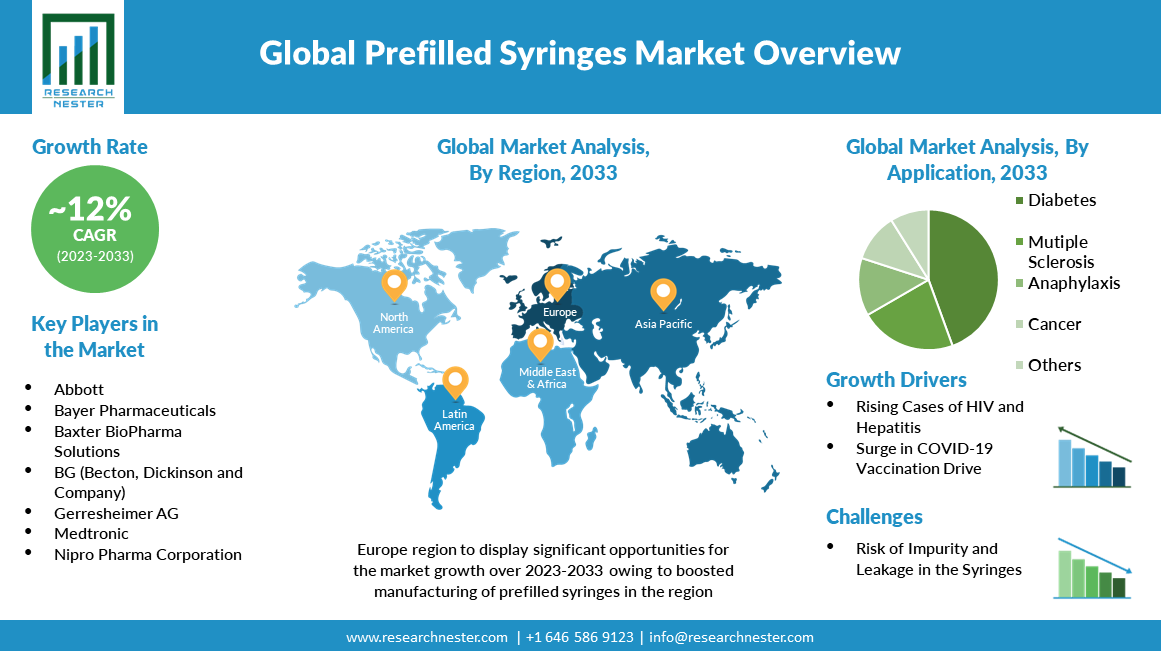 Rising burden of chronic disease such as, diabetes, cardiovascular problems, arthritis and others is likely to boost the growth of prefilled syringes market. By the statistics of the World Health Organization, nearly 18 million people died of cardiovascular disease. Furthermore, rising risk of getting infected with needles is to grow the demand of prefilled syringes. The use of the used syringes could be an accident or an act of crime. In Pakistan, a doctor used HIV infected needles on around 900 healthy children under 12, they are now added in the list of confirmed cases of HIV.

Many doctors use pre used needles to save their stock, it itself counted as crime, moreover, it might severely harm a healthy person. In order to prevent such crimes or accidents, prefilled syringes are the best solution. Every year, nearly 385,000 health care workers accidently stick needles in them by accident

According to the Word in Data, every day 3.87 million vaccination is carried out worldwide and 12.69 doses has been administered.

The higher demand of biologic drugs has increased its sales. Biologics has overshadowed the small molecule sales and by 2027 biol0gics drugs is expected to have sales of worth USD 120 billion more than small molecules.

Low quality of material used for making the syringes, lousy transportation might result in damages syringes and leak of the contained drug. The damages such as bent needle, punctured rubber seal or plunger, and broken glass syringes are likely to hinder the market growth.

The prefilled syringes market is segmented and analyzed for demand and supply by application into diabetes, multiple sclerosis, anaphylaxis, cancer and others. The diabetes segment is anticipated to hold the largest market size by the end of 2033. Rising requirement of insulin treatment is expected to drive the growth of the diabetes segment. Around 150-200 million people worldwide are in the requirement of insulin therapy in 2018. Increased burden of diabetes on the world is to grow the diabetes segment. According to the WHO, 422 million people are living with diabetes worldwide.

Regionally, the global prefilled syringes market is studied into five major regions including North America, Europe, Asia Pacific, Latin America and Middle East & Africa region. Amongst these markets, the market in Europe is projected to hold the largest market share by the end of 2033. The growth is expected on the account of companies highly investing in the injectable pharmaceuticals. Additionally, rapid vaccination drive in the region is responsible for boosting the growth of market in Europe. In Russia, as of August 2022, about 171 million COVID-19 vaccine doses has been dispensed. 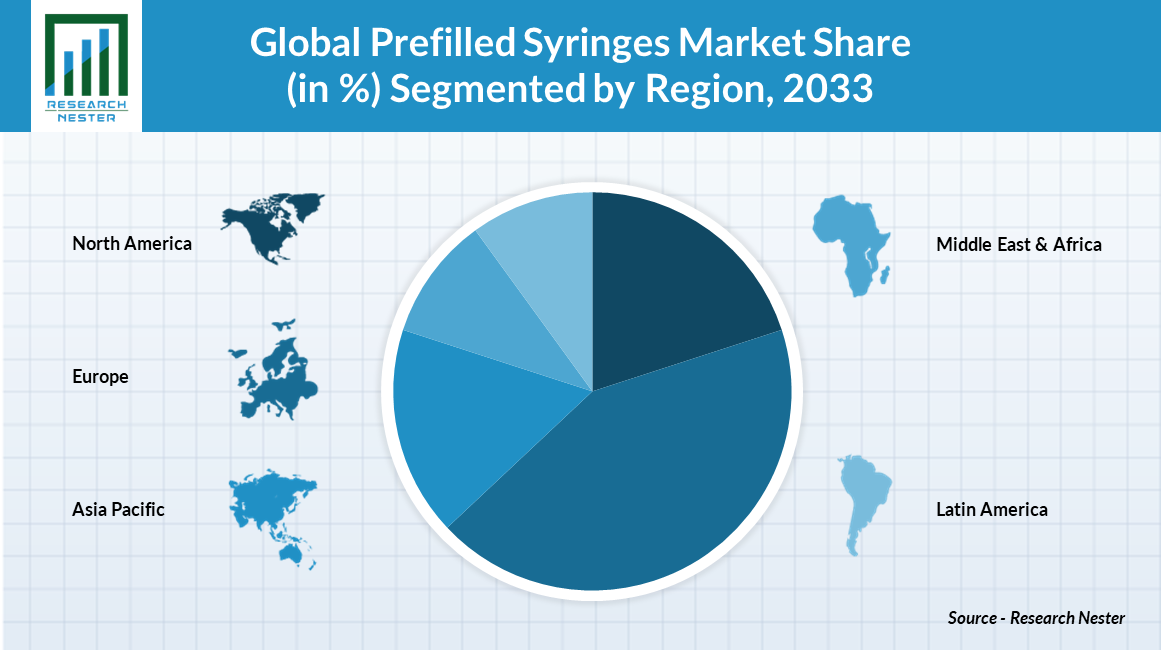 The global prefilled syringes market is further classified on the basis of region as follows:

Our in-depth analysis of the global prefilled syringes market includes the following segments:

What are the major factors driving the growth of the prefilled syringes market?

Higher number of HIV and hepatitis patients, growing vaccination drive of COVID-19, risk of contamination by used needles, rising investment in prefilled syringes and higher use of biologic drugs are few factors likely to propel the market growth.

What would be the CAGR of prefilled syringes market over the forecast period?

What are the challenges affecting the prefilled syringes market growth?

Risk of syringe leakage, stringent rules for the manufacturing of prefilled syringes and chances of embolism while injecting are few challenges faced by the market

Which region will provide more business opportunities for growth of prefilled syringes market in future?

The market in Europe is projected to hold the largest market share by the end of 2033 and provide more business opportunities in the future.

Who are the major players dominating the prefilled syringes market?

What are the segments in the prefilled syringes market?

The market is segmented by design, material, application, and by region.

Which segment captures the largest market size in application in the prefilled syringes market?

The diabetes segment is anticipated to garner the largest market size by the end of 2033 and display significant growth opportunities.