The global biosimilars market is estimated to garner a revenue of ~USD 209.8 billion by the end of 2033 by growing at a CAGR of ~22.9% over the forecast period, i.e., 2023 – 2033. Further, the market generated a revenue of ~USD 17.8 billion in the year 2022. The growth of the market can primarily be attributed to the growing spending on biologics worldwide. It was found that, in Europe, biologics represented almost 34% of medicine spending at list prices, which was ~5% CAGR for the total market comprising small molecules, biologics, and biosimilar competitors. 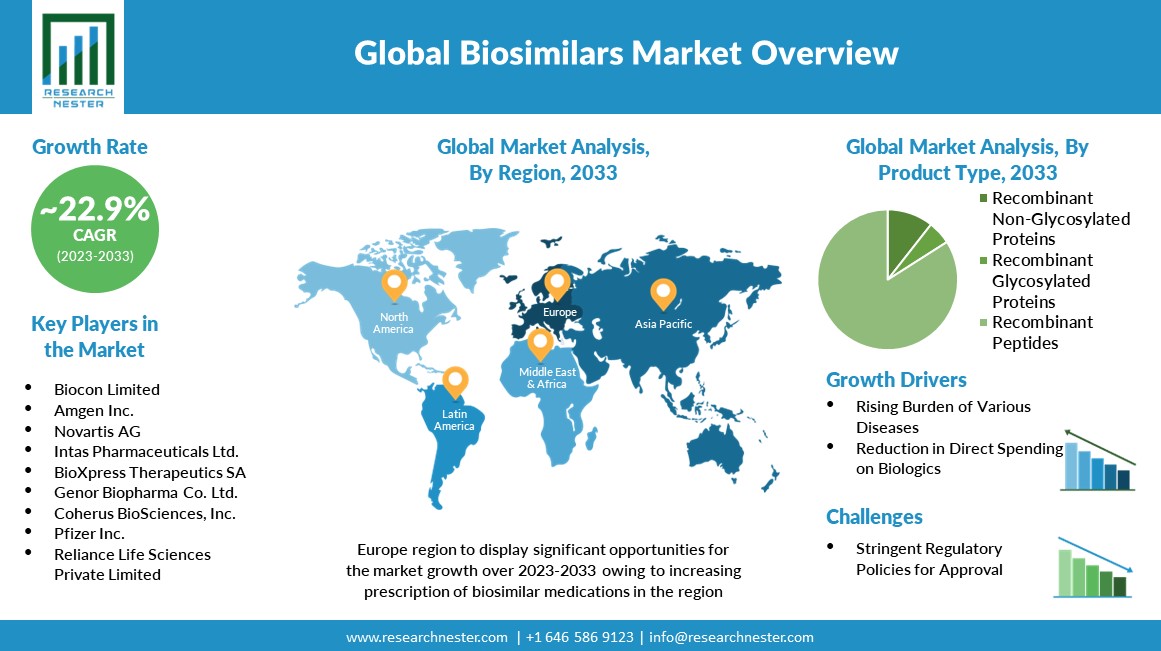 Biosimilars are helpful in increasing access to healthcare for many as it is responsible for reduction in the healthcare costs associated with the use of biologics. Since biosimilars drugs are very similar copy of their reference biologics, they require much less research and development for equal efficacy and safety than their reference biologics. The recent approvals of biosimilar drugs are expected to reduce the spending on biologics resulting in the demand for biosimilars amongst the healthcare service providers, which in turn, is expected to create massive revenue generation opportunities for the key players operating in the global biosimilars market during the forecast period. It is estimated that, biosimilars are expected to reduce direct spending on biologic drugs in the United States by ~USD 54 billion from 2017 to 2026, or around 3% of the total estimated biologic spending over the same time span.

Regionally, the global biosimilars market is studied into five major regions including North America, Europe, Asia Pacific, Latin America and Middle East & Africa region. Amongst these, the market in Europe held the largest market share of 55% in the year 2022, backed by the presence of a strong healthcare network in the region, growing number of hospitals and diseases, as well as the rising awareness of biosimilars amongst the healthcare service providers along with the surge in prescribing biosimilars. For instance, the volume of biosimilar prescribing has generated high savings from biosimilars competition. The list price savings accounted for ~USD 5.6 billion (excluding confidential rebates and discounts). 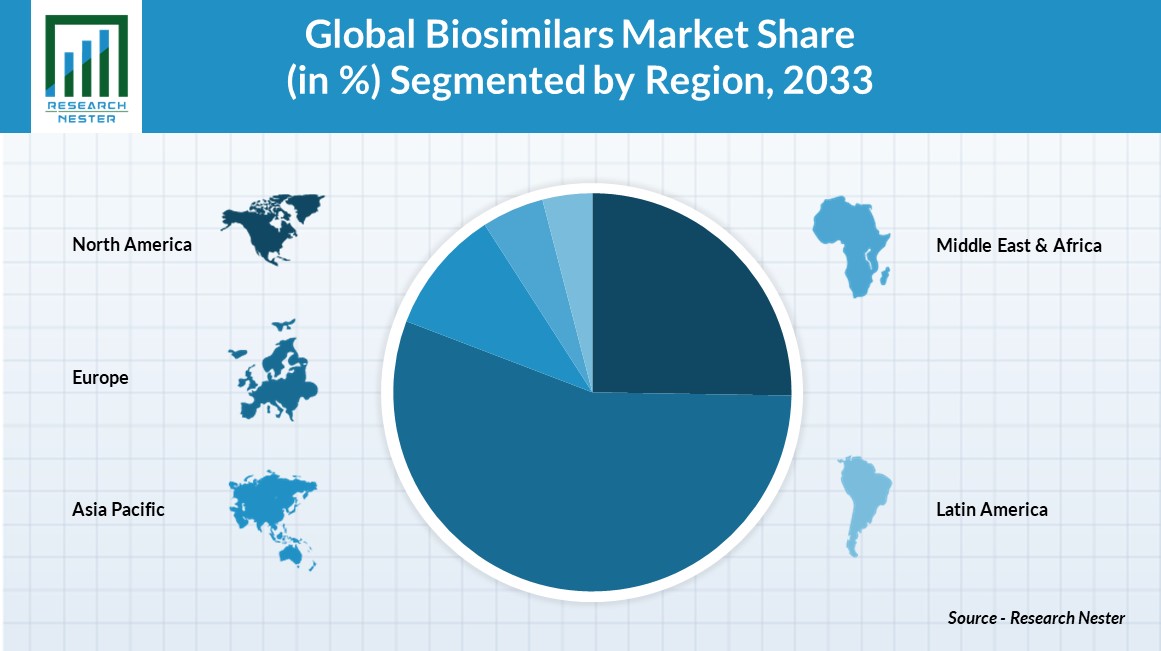 The global biosimilars market is further classified on the basis of region as follows:

Our in-depth analysis of the global biosimilars market includes the following segments:

What are the major factors driving the growth of the biosimilars market market?

Rising burden of various diseases as well as reduction in direct spending on biologics along with increasing development and commercialization of biosimilars are some of the major factors anticipated to drive the growth of the market.

What would be the CAGR of biosimilars market market over the forecast period?

What are the challenges affecting the biosimilars market market growth?

Stringent regulatory policies for approval of biosimilars along with concerns about manufacturing processes of biosimilar agents are some of the factors estimated to hamper the market growth.

Which region will provide more business opportunities for growth of biosimilars market market in future?

The market in Europe garnered the highest market share of 55% in 2022 and is projected to provide more business opportunities in the future.

Who are the major players dominating the biosimilars market market?

What are the segments in the biosimilars market?

The market is segmented by product type, technology, application and by region.

Which segment captures the largest market size in product type segment in the biosimilars market?

The recombinant non-glycosylated proteins segment garnered the highest market share of 63% in the year 2022 and display significant growth opportunities.